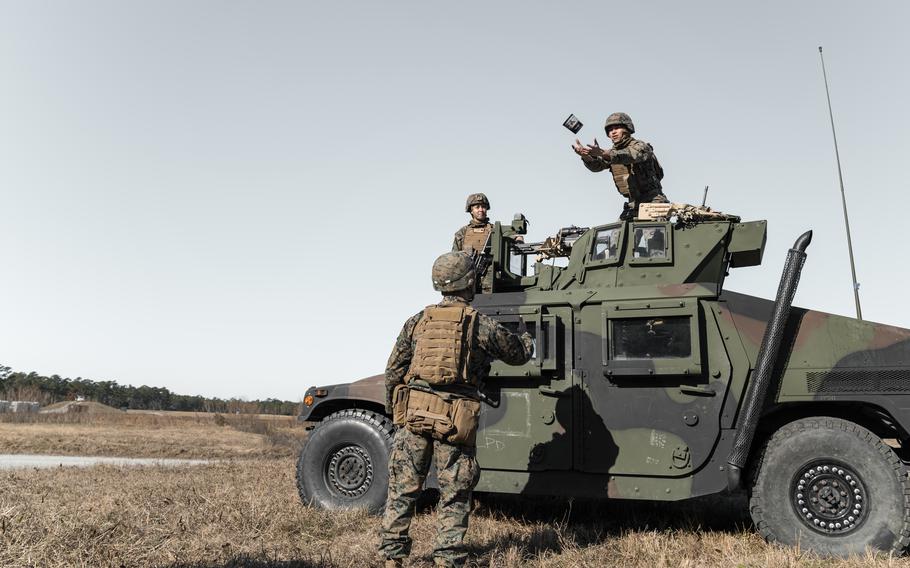 A Humvee fire on a highway near Camp Lejeune involved members of the 2nd Marine Division, which is headquartered at the North Carolina installation, a division spokesperson said.

There were no casualties, 1st Lt. Sydney E. Murkins said in a statement emailed to Stars and Stripes a few hours after the incident that tied up the Thursday morning commute. The circumstances were still being investigated, Murkins said.

Emergency services crews responded to a military vehicle fire on U.S. Highway 17, south of Jacksonville, N.C., the Onslow County government said in a message on Twitter about 7:45 a.m. local time.

“Travelers along US17 (Wilmington Hwy) might want to avoid the area near Canady Road,” the post said. “Crews are reporting a HumVee fire.”

The vehicle fire was affecting southbound traffic only, the county government said in a later post.

The vehicle was cleared from the roadway, the 2nd Marine Division said on Twitter about three hours after the initial report.

We can confirm there have been no casualties and the HMMWV has been cleared from the road.

The fire comes just over a month after a tactical vehicle rollover at the intersection of U.S. Highway 17 and state Highway 210 a few miles further south that left two Marines dead.