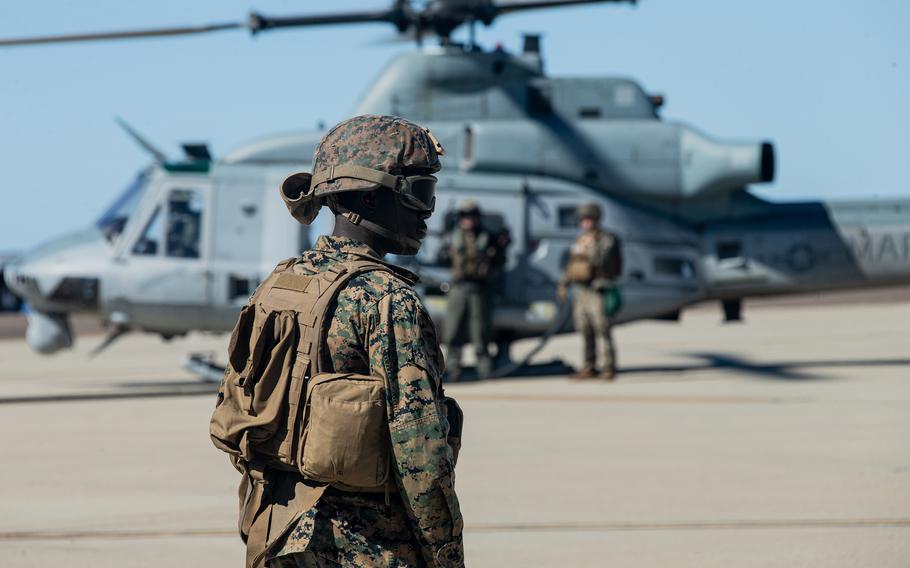 "I'm from Boston, Massachusetts, and it's two years since I've been home," said the young Marine. "I was looking at the snow and went, 'Wow, it would be nice to be home.'"

Instead, Hernandez will spend the next few days at the Grant County International Airport, out in the cold, helping her unit of the 3rd Marine Aircraft Wing based in southern California, as it stages a series of long-range simulated air strikes against targets in southern California in the USMC's Winter Fury 22 exercise, the second such Marine Corps war game to be held in Moses Lake.

The exercise is scheduled to last through Thursday.

According to Lt. A.J. Anbarcioglu, the Marines are practicing setting up a small, temporary refueling and rearming facility in "a semi-permissive" environment to practice a long-range strike by F-35 Lightning II and F/A-18 Hornet fighters at least a thousand miles away.

It will simulate a military action between "a second island chain in Asia" like the Philippines and "another large Pacific nation in Asia" he did not name.

"We're doing a lot of novel, cool stuff here," Anbarcioglu, a native of Mercer Island and a combat engineer, said. "It's going to be a lot of fun."

"It's good to be back in Moses Lake," he added.

A company of Marines with the 1st Battalion, 4th Regiment also arrived on a trio of MV-22 Ospreys to set up a perimeter and maintain basic security against whatever simulated threat or enemy the Marines in Moses Lake might face.

"Anywhere we go, we need to set up a defense and maintain security," said Capt. William Cheatham, commander of Charlie Company. "They're digging some fighting positions, and you'll see the sandbags and the machine guns come out."

Despite being stationed at Camp Pendleton, near San Diego, Cheatham said the Marines are no strangers to snow, and regularly train at the Corps' Mountain Warfare Training Center, east of Sacramento, near Bridgeport.

"It's seasonal, and we go up whenever we can," he said. "This is the first time we're doing this in this training cycle, and it's not going to be the last."

Cheatham, a New Jersey native who has served in the USMC for eight years, said the best part of being a Marine is serving with other Marines.

"Throughout my time in the service, I see people that amaze me," he said. "Time and time again, they amaze me with their dedication and loyalty not only for the service, but for each other."

Hernandez, 20, said she will help set up the radio gear to allow the ground controllers to talk with aircraft pilots, guide them in, and then send them on their way.

While she originally planned to enlist in the U.S. Navy, Hernandez said she was more impressed by the Marines and she had something to show friends, family and the world.

"A lot of people told me I couldn't do it, so I had to prove them wrong," she said.