Marine, 20, who stopped to help disabled vehicle on freeway is killed in crash near Camp Pendleton 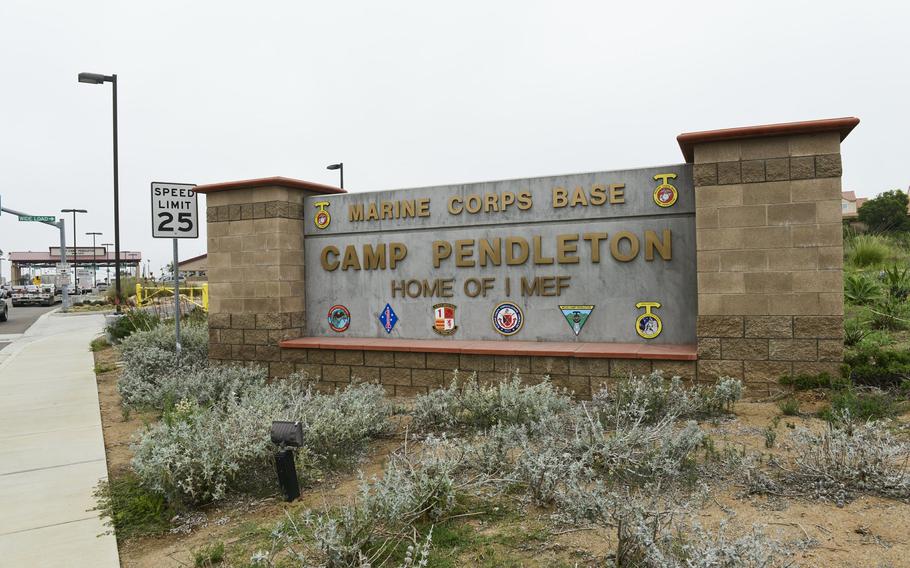 Camp Pendleton Marine Corps Base sign outside the main gate of the base. (San Diego Union-Tribune/TNS)

SAN DIEGO (Tribune News Service) — A U.S. Marine who stopped to help two people involved in a crash on south Interstate 5 near Camp Pendleton was killed early Monday when he was struck on the freeway, authorities said.

The Marine’s name was not released, but authorities said he was 20 years old and stationed at the nearby base. The passenger and driver of the SUV were hospitalized with major injuries, the California Highway Patrol said in a news release.

The initial crash was reported around 3:22 a.m. south of Las Pulgas Road.

According to the CHP, a Ford Edge was headed south on the freeway when the driver lost control and crashed, leaving the car sitting in the traffic lanes with no lights on.

After the Marine stopped to help the SUV driver and passenger, a box truck driven by a 47-year-old man crashed into them. The Marine died at the scene.

The 36-year-old man driving the SUV and his passenger, a 31-year-old woman, were taken by ambulance to a hospital. Their condition was not released.

CHP Sgt. Nicole Pacheco said the driver of the SUV would be booked into jail on suspicion of multiple felony charges after he is released from the hospital.