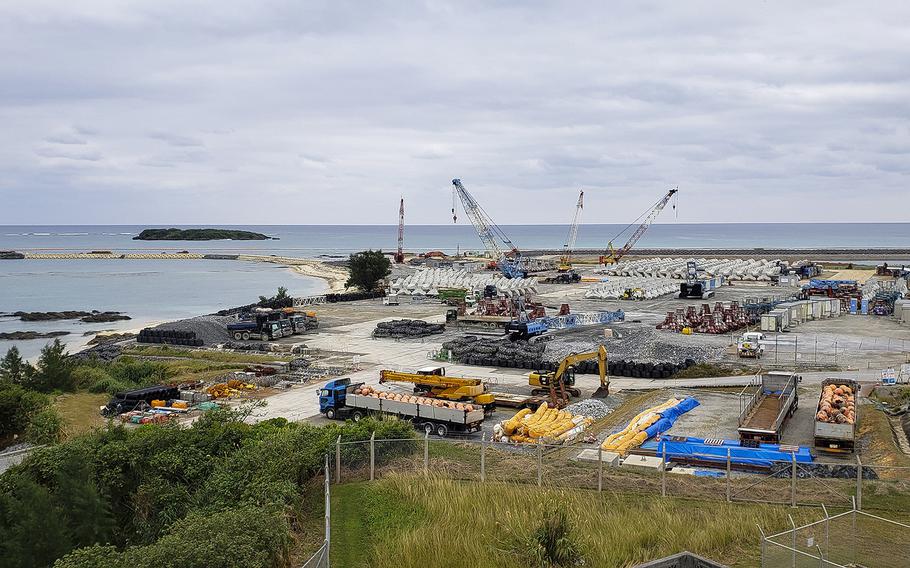 Buy Photo
Construction work continued at the site of a new runway into Oura Bay at the Marine Corps' Camp Schwab on Jan. 19, 2019. (Carlos M. Vazquez II/Stars and Stripes)

Tamaki, not surprisingly, denied the application filed in April 2020. He wrote the Japanese government to say the seafloor at the site may be unstable and requires further investigation, along with other environmental concerns.

The seabed in Oura Bay in Henoko, where land is being reclaimed for the runway, is softer than builders anticipated. The prefecture has also raised concerns over endangered species of coral nearby.

“There are many people of Okinawa and of Japan who are anxious, furious and sad to see the government using iron fists and forcing the reclamation work without providing a sufficient explanation,” Tamaki said at a press conference Thursday. “We have repeatedly expressed to the government that relocation (of MCAS Futenma) to Henoko would not lead to an immediate removal of danger.”

This is Tamaki’s latest bid to halt a project that he campaigned on stopping. His efforts have largely been overruled by the Japanese courts and Cabinet-level authorities.

On Thursday, Tamaki said uncertainty over construction safety would cast a pall over the project long after its completion.

“We received about 18,000 public opinions; we had to check those as well,” the spokesman said. Government spokespeople in Japan typically speak to the media on condition of anonymity as a condition of their employment.

The prefecture also submitted 452 questions to the Okinawa Defense Bureau, which represents Japan’s Ministry of Defense on the island, the spokesman said.

Tamaki has vowed since his election in September 2018 to do anything in his power to halt the project. He campaigned on moving Marine air operations entirely outside the prefecture.

The defense bureau will investigate Tamaki’s reasons for the disapproval, a spokesman told Stars and Stripes by phone Friday. He declined to comment on the bureau’s plans to contest the governor’s decision.

The bureau will likely file an administrative challenge with the Minister of Land, Infrastructure and Transportation under the Administrative Appeal Act since the courts have already said the project could proceed, a prefectural spokesman with the Henoko Base Construction Countermeasures Division told Stars and Stripes by phone Friday.

In the meantime, work will continue in the unaffected portions of the construction zone, the defense bureau spokesman said. Tamaki on Thursday said that continuing work on any part of the project is “virtually meaningless.” He said he believes his latest denial effectively killed the project.

“There is no prospect of completing the entire” project, Tamaki said Thursday. “Okinawa Defense Bureau should stop not only the work related to this design change, but all the landfill work.”

Tamaki’s last effort to derail the project came in July when he withdrew a permit for coral transplantation. That was later overturned by Japan’s Ministry of Agriculture, Forestry and Fisheries.

The fight to relocate Marine air operations from a central urban area on Okinawa to the rural northern coast at Camp Schwab began over 25 years ago. Work finally began in 2017 but has been beset by legal and administrative challenges by successive governors.