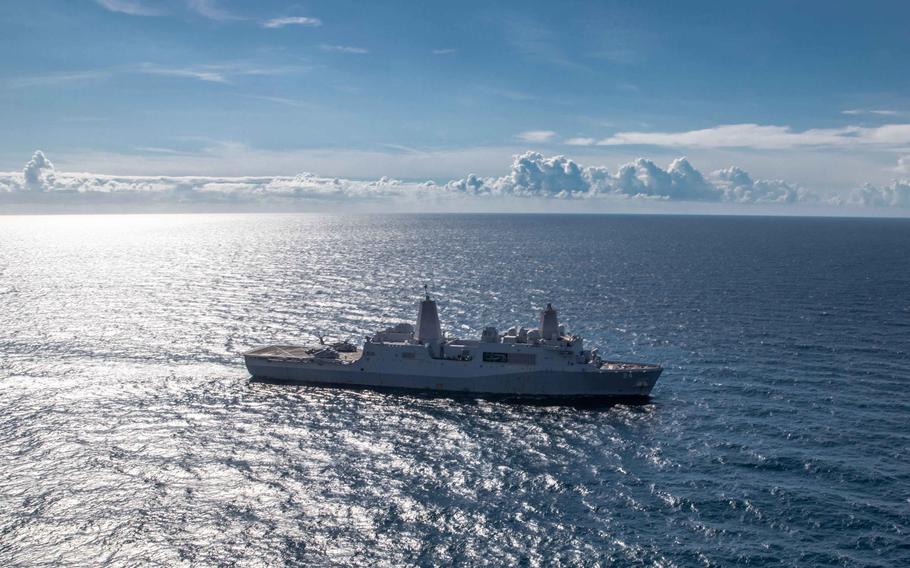 The USS Arlington sails in the Atlantic Ocean on Oct. 22, 2021. Over three months in early 2019, a Marine aboard the ship used a GoPro to film unsuspecting female crew members while they were undressed in a bathroom on the ship. (John Bellino/U.S. Navy)

A Navy appeals court upheld the conviction of a Marine lance corporal who filmed female sailors showering aboard the USS Arlington, then tossed his camera overboard when he was discovered.

His sentence of four months in jail, reduction of rank to private and a bad-conduct discharge was also upheld.

The panel rejected his argument that the judge who accepted his guilty plea had erred because Smith was only “concealing his offenses” not obstructing justice when he disposed of his property.

Over three months in early 2019, he repeatedly mounted his GoPro camera on a selfie stick and inserted it through a hole in the wall between his barracks room and the women’s bathroom.

He recorded one woman drying off after a shower and showed the images to two fellow Marines.

Eventually, a female Marine who spotted the camera called it out, according to court documents. Smith returned to his rack, removed the memory card and snapped it in half, then threw the GoPro and its accessories overboard, the documents said.

Smith said he got rid of the evidence because he thought there would be a probe, court records state. An investigation was already underway when Smith returned to his quarters, and he confessed, according to court documents.

But in his appeal, he said he didn’t have enough reason to think an investigation would ensue because it was anyone’s guess whether the woman who had caught the intrusion would report it.

Without an impending investigation, his disposal of the camera and memory card was merely concealing evidence, he argued. In the appeal, Smith said the military judge should have inquired further into this issue.

The appellate court responded that whether destruction of evidence constitutes obstruction of justice as opposed to mere concealment of an offense requires case-by-case consideration of the facts and circumstances.

The judges noted a 2008 case in which flushing marijuana down the toilet during a barracks inspection was deemed not to be obstruction but “merely an effort to avoid detection” of an offense the government was unaware of.

Smith’s actions weren’t mere concealment, the judges wrote, because when he tossed the camera and memory card, he knew his crime had already been detected.

Moreover, at his court-martial in 2020, Smith had stated “unequivocally and repeatedly” that the reason for his evidence destruction was his belief that there would be an investigation.