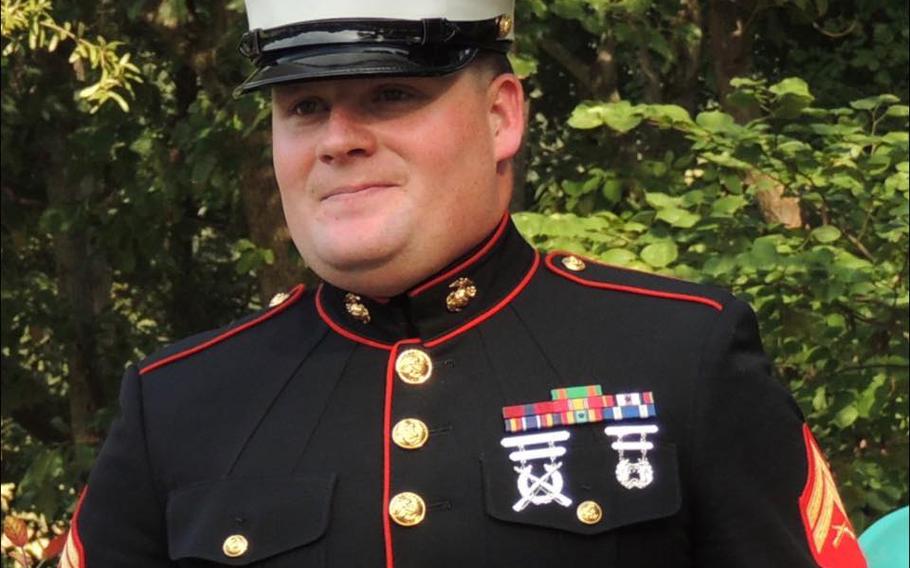 ALISO VIEJO, Calif. (Tribune News Service) —They might not have known Staff Sgt. Taylor Hoover, one of the 13 American service members killed in last month’s bombing attack of the Kabul airport, but more than 200 members of the Orange County community where he shared a home with his fiance wanted to show what his sacrifice meant to them by honoring the man he was.

As the sun started to drop Sunday evening, they held candles and little American flags, sitting in the small amphitheater of the Aliso Viejo Towne Center for a vigil to honor one of their own. Hoover, 31, who grew up in Daggett County, Utah, lived with his fiance Nicole Weiss in town, just a short drive to Camp Pendleton’s northern border where Hoover was stationed with the 2nd Battalion, 1st Marine Regiment at Camp Horno.

Hoover was one of 10 Marines from the regiment that died in the bombing attack Aug. 26. Three others grew up in Southern California.

Described by his family in stories as “someone who would light up the room with his smile,” Hoover had deployed with his 2/1 unit to the Middle East in April as part of a special crisis response force. Due home later this fall, they were routed to the airport to help secure its perimeter as Americans and Afghan allies crowded to get to the planes and evacuate in the final days of the United State’s withdrawal from Afghanistan.

“All these people came out to support a total stranger,” Aliso Viejo Councilman Dave Harrington said. He had brought the plans for the vigil to the dais and asked the city to help get the message out. “It was very emotional and patriotic, it makes you proud to be an American.”

Those in attendance included military veterans, active-duty Marines and families from the community. The service ended with taps played by a Marine bugler.

“There was a strong sense of unity,” said Diane Davani, who with Ted Fuentes, Harrington and Harrington’s wife, Michele, a Marine veteran, organized the vigil.

“The Aliso Viejo community is a family. We share good times and bad,” she said. “Staff Sgt. Hoover’s loss has been felt by all and we want to honor his ultimate sacrifice for our country. We’re also committed to support and comfort Nicole during this difficult time.”

For Fuentes, a veteran activist who served in the Air Force from 1986 to 1993, the vigil was a small way he could pay his respects to a brother in service.

Fuentes also partnered with a local restaurant, Tony Pepperoni, known for its support of the military and veterans for a fundraiser for Weiss that raised $4,000 over the weekend.

Fuentes said he invited Hoover’s fiancée to the restaurant to meet other veterans in the community so she could sense the broad support Aliso Viejo has for her.

“I wanted to make sure she knew we had her back,” he said.

Communities throughout Southern California have been holding candlelight vigils, car and truck rallies and even a hike to recognized their fallen Marines. On Sept. 4, 800 turned out at Camp Pendleton’s Del Mar Beach to pay tribute to their own. On Sept. 5, about 600 people marched through San Clemente’s downtown along Avenida Del Mar ending at Park Semper Fi where they paid tribute to the 13 who died.

The Aliso Viejo vigil Sunday was the beginning of another long week of remembrances as the Marines are flown home for funerals.

On Thursday, Sept. 16, Cpl. Hunter Lopez, the son of Riverside County Sheriff’s Captain Herman Lopez and Deputy Alicia Lopez, will return to Southern California for his funeral. A procession is planned to start in Cathedral City. It will travel through Palm Desert, passing the Sheriff’s Department station, and end in La Quinta, where his father served as the police chief.

On Friday, a second procession will be held for Lopez, this time touring past the schools he attended in Indio and La Quinta. A memorial service will be held for him on Saturday at the Palm Springs Convention Center. Lopez will be buried a the Riverside National Cemetery.

Also on Friday, Lance Cpl. Kareem Nikoui will be returned home. A procession is planned for him departing from the Ontario Airport around 2 p.m. A funeral will be held at Harvest Christian Fellowship on Saturday, Sept. 18.

And on Sept. 21, Lance Cpl. Dylan Merola is expected to return to California. A procession is planned. He will be laid to rest at Forest Lawn in Covina Hills on Sept. 26.