‘I want him home’: Two Maine moms with Marine sons in Afghanistan filled with pride, worry 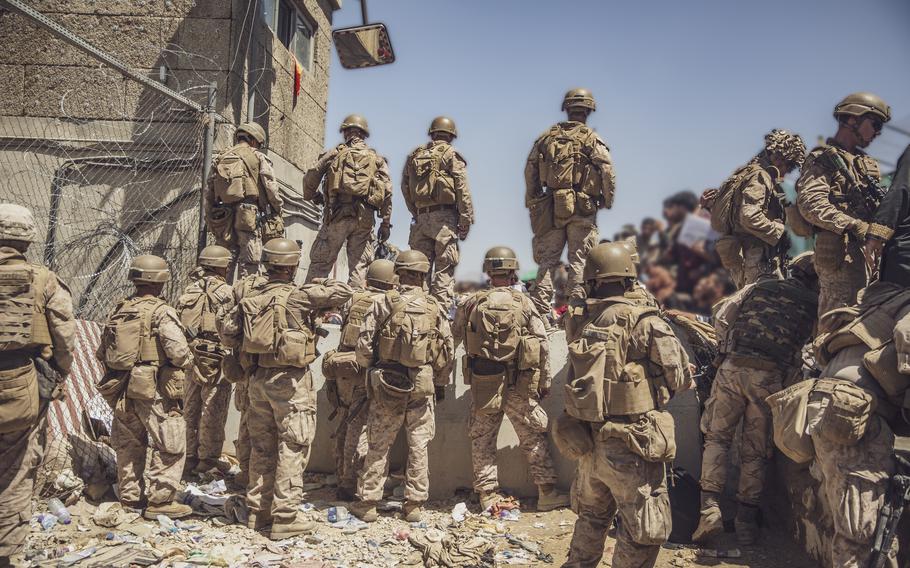 Flags across the nation flew half-staff after at least 13 U.S. service members were killed and many more people were injured in Afghanistan. The casualties followed the Aug. 26 attack at the Abbey gate of Hamid Karzai International Airport in Kabul.

Aaron Penney, 21, and Freddy Owens, 20, grew up together as lifelong friends, their mothers say, and both talked from a young age about being Marines. They worked hard to make that boyhood dream a reality after graduating together from Marshwood High School in 2019.

Becky Owens heard immediately from her son that he was OK after the attack. After two days of waiting and worrying, Jennifer Penney received good news in a text from her son Saturday morning.

“When I got the text, my heart dropped to my feet,” she said Saturday morning. “It was such a sense of relief. I could finally breathe again, knowing he’s physically OK.

“These boys are just the best of friends and it’s hard to believe that the two of them are in the middle of this mess right now.”

She also had words for parents who received word their loved ones had died.

“I feel for the families that didn’t get good news,” Penney said. “I’m praying for all our sons and daughters deployed and all of their families. I just want them out and home.”

As the danger in Afghanistan escalates, both Eliot moms are worried about their sons who were both assigned to the airport that was attacked.

When Penney heard about the bombing, knowing Aaron was there, she said her world fell apart.

“It’s so hard, because we heard the news, all we know (is) there were two bombs and there were Marines injured, but we don’t know who they are. Knowing our children were there, it’s so hard,” Penney said Thursday afternoon. “I just, I can’t breathe. I’m wandering around in a fog.”

Having lost his cell phone at an airport in transit to deploy to Afghanistan, her son had previously used other Marines’ phones to check in back home. The last time she heard from him was about a week before the Kabul airport attack. She said she got a phone call when he arrived in Afghanistan, and it was one of the hardest conversations she’s ever had with her son.

“With everything going on there, he just wanted to make sure I was going to be OK,” Penney said. “He said to me, ‘I know this is gonna be really hard for you, Mama.’ And I’m gonna do [my job] well, and everything’s gonna be OK. But if something goes wrong, you have to promise me that you won’t fall apart.”

It’s a promise Penney said she was doing her best to keep in the days between the attack and when her son was able to reach her. While her family continued to reassure her that “no news is good news” as they say in the military, she said the hardest part was the wait for confirmation he was OK.

Penney said that while her son is overseas she can’t bring herself to watch TV news, so she gets updates from friends.

Owens said it was a huge relief when she got the text from Freddy assuring her that he was safe.

“He texted me: ‘I’m not sure if you’re watching the news, but I’m OK.’ I got that text before I saw the news, so it was a lot easier to take,” Owens said. “I’m just counting the minutes until he can get out. We just try to concentrate on how proud we are of the amount of people that the U.S. military is getting out, and we’re very proud of everybody over there who’s busting their butt to save lives.”

Both men were among the first teams that deployed to Afghanistan, arriving amid the chaos that led to the Taliban taking control of the capital city of Kabul.

Both Marine mothers know the situation overseas changes minute by minute. U.S. officials have warned of more attacks and growing hostility on the ground.

“I know there’s a lot of people that have his back and he has a lot of people’s backs,” Penney said. “He’s an amazing Marine, who has gained so many brothers in the service. He’s my hero, my best friend, and I just want him to come home so I can give him a hug.”