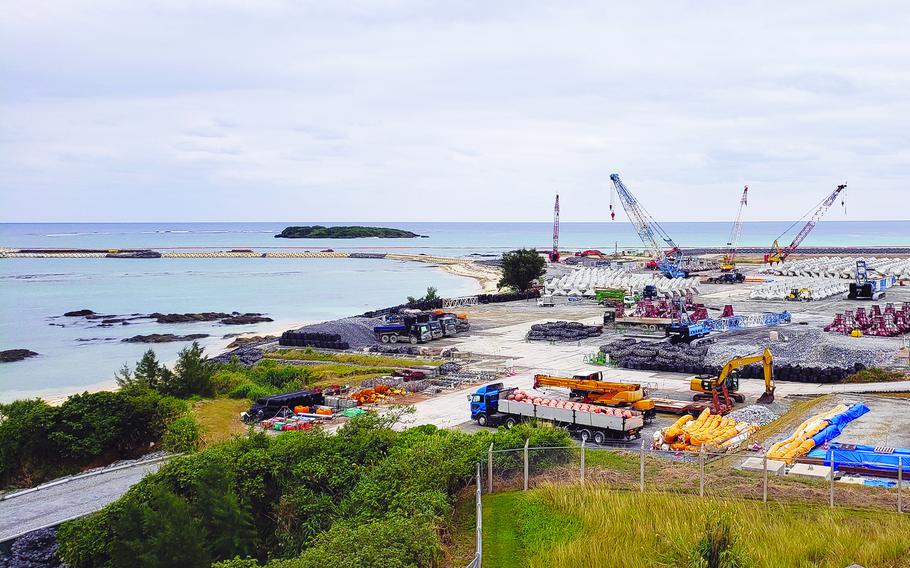 CAMP FOSTER, Okinawa – Okinawa prefecture pulled a permit to relocate 40,000 colonies of endangered coral just two days after it was issued, halting work at the contentious site of a new Marine Corps airfield.

The endangered coral is in Oura Bay, just offshore of Camp Schwab, where a runway is being built into the rural bay to relocate Marine Corps Air Station Futenma from crowded Ginowan city. Plans call for the coral to be moved to the opposite side of the bay, to the north, according to a copy of the plan on the Okinawa Defense Bureau’s website.

The prefecture had stipulated that the work proceed slowly, and not take place during the typhoon or breeding season or during periods of high sea temperatures.

Work at the site has stopped, an Okinawa Defense Bureau spokesman told Stars and Stripes on Tuesday. The Japan Ministry of Agriculture, Forestry and Fisheries is expected to study the issue and decide whether the project can proceed.

“The transplanted coral will die out, but they do not think about stopping what they are doing,” a spokesman from Okinawa prefecture’s Henoko Base Construction Countermeasures Division told Stars and Stripes by phone Tuesday. “Revoking the approval was a necessary measure Okinawa prefecture had to take in order to protect the marine environment.”

The defense bureau, an arm of the Japan Ministry of Defense overseeing the airfield project, was following the advice of experts when it began relocating the coral, the bureau spokesman said.

The prefecture gave the bureau only two months to work on one section of the construction site, so it was forced to start right away, the spokesman said. The two-month window coincides with typhoon season.

“The procedure was appropriate, and therefore, there should be no reason for revoking the approval to transplant the coral,” the spokesman said.

The defense bureau on Monday asked the Ministry of Agriculture, Forestry and Fisheries to suspend the prefecture’s decision and review its legality, the spokesman said.

A decision by the ministry could come in 10 days to two weeks, the prefectural spokesman added.

Work began at Camp Schwab in 2017. The prefecture allowed the Japanese government to relocate coral in July and August of 2018 but five of the nine transplanted colonies of endangered Porites okinawensis Veron died. More than 16 families of coral have been found in the construction zone.

Porites okinawensis faces extinction and is on Japan’s Red List of Threatened Species, according to the Ministry of Environment.

On July 6, Japan’s Supreme Court dismissed the prefecture’s suit and, last week, Tamaki reluctantly approved the transplantation. But, he also threatened to shut it down if certain conditions weren’t met.

The fight over coral is the latest in the decades-long saga over relocating the air station from an urban area in the central part of the island to the rural northern coast at Schwab.

The Japanese government supports the plan, but Tamaki is a staunch opponent of the Marines’ relocation within the prefecture. He has vowed to block changes to the site plan, which could cause further delays.