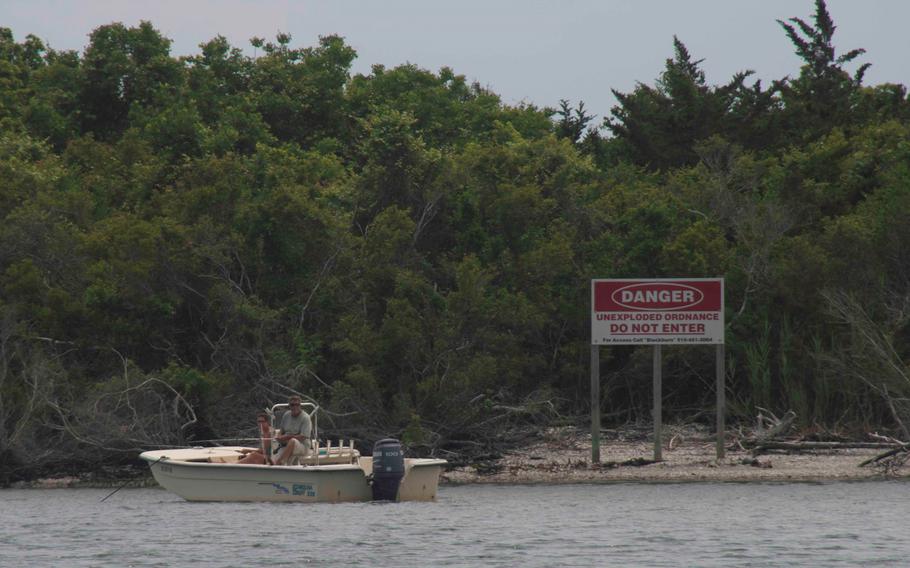 A couple sits illegally anchored in front of Brown’s Island in the Atlantic‐Intracoastal Waterway on May 25, 2018. The recent discovery of a hidden 250-pound bomb has prompted a new round of warnings from the Marine Corps for people to avoid setting foot on Brown’s Island on the North Carolina coast. (Breanna Weisenberger/U.S. Marine Corps)

(Tribune News Service) — The recent discovery of a hidden 250-pound bomb has prompted a new round of warnings from the Marine Corps for people to avoid setting foot on Brown’s Island on the North Carolina coast.

Marine Corps Base Camp Lejeune reported the World War II-era AN-M57 A1 variant bomb was found last month — but didn’t release details of how it was detected. The volatile island, used for military weaponry tests, is off-limits to civilians and most military personnel.

“This piece of ordnance was under water during high tide and was not visible from above the surface,” explosives disposal specialist Gunnery Sgt. Christopher Guillory said in a July 2 news release.

“Any movement or jarring of the (bomb), especially by boat or watercraft, could be enough to function and create a detonation,” he continued.

Despite being decades old, the strength of the bomb’s explosion was described as powerful “enough to completely destroy an armored military vehicle or a watercraft.”

The discovery has elevated fears that recreational boaters may stray too close to the island, which has served for decades as an “impact area” for Camp Lejeune’s weapons testing. Adding to the challenge is the fact that Brown’s Island is situated between two popular coastal spots: Onslow Beach and Hammocks Beach State Park.

On Wednesday, Camp Lejeune issued a new round of warnings on social media, reminding the public “Brown’s Island is strictly off-limits to civilians and military personnel not specifically scheduled or pre-arranged to be there.”

“Base officials would like to re‐emphasize to the community the importance of no trespassing on Brown’s Island and remind users of the Atlantic‐Intracoastal Waterway of the restrictions to the creeks and tributaries ... leading to and around Brown’s Island,” Marine Corps officials said in a release.

“The waterway restrictions ... are there in order to protect people from the frequent live-fire exercises conducted and the unexploded ordnance (UXO) in and around the area.”

Red and white warning signs are posted on the shores of Brown’s Island, but photos shared by the Marine Corps show boaters still continue to stray too close.

Trespassers face a maximum penalty of $5,000 and six months in jail, base officials said.

Camp Lejeune periodically reports live bomb discoveries on the island, including an October 2019 incident in which four Mark 82 bombs were located. Each contained nearly 200 pounds of high explosives — “totaling 788 pounds,” base officials said in a release.

The military has used Brown’s Island for target practice since the 1940s, and it is believed many “dud munitions are buried in the sand or under water.”

Experts say the bombs are so unstable “any disturbance could cause them to explode.” This includes something as simple as dropping an anchor in the water or dragging fishing nets across the bottom of surrounding creeks.