Marines to practice over Moses Lake in Summer Fury 21

MOSES LAKE, Wash. (Tribune News Service) — If it’s a little louder in Moses Lake beginning Wednesday, it’s because portions of the 3rd Marine Aircraft Wing will be in town — over it, actually — as part of a major military exercise for the first time in Moses Lake.

According to U.S. Marine Corps spokesperson Maj. Alex Lim, Exercise Summer Fury 21 will involve the deployment of F/A-18 Hornets and F-35C Lightning II fighters, as well as transport aircraft and helicopters from Marine Corps Air Station Miramar in California, to test the Corps’ ability to “conduct long-range strikes against a peer enemy.”

Lim said the Marines and their aircraft will deploy to Moses Lake on Wednesday and conduct a series of simulated and real strikes on Naval targets around San Nicolas and San Clemente islands, off the coast of southern California — nearly 1,000 miles away.

That’s roughly the distance between Singapore and the disputed Spratly Islands in the South China Sea, where the People’s Republic of China is building several major military bases.

The goal is to test the ability of the Marine units to deploy anywhere they need to quickly, with minimal supplies, and conduct operations against naval units far away, Lim said.

The operation is going to test the Marines’ ability to conduct strikes and operate an ad hoc airbase, he added, and to see if the Grant County International Airport can host future Corps’ exercises.

According to a Marine Corps press release, the Marines will arrive Wednesday and set up a forward arming and refueling point at the Grant County International Airport, with the fighter-bombers scheduled to conduct two rounds of simulated attacks off southern California on Thursday, and then leave on Friday.

“The more realism there is, the better off we’ll be,” Lim added. “This is how we’ll fight.”

In the process, Moses Lake residents should get a chance to see the Corps’ newest fighter, the F-35C Lightning II, in action over Grant County, Lim added.

“It’s been great working with the Port of Moses Lake,” Lim said. 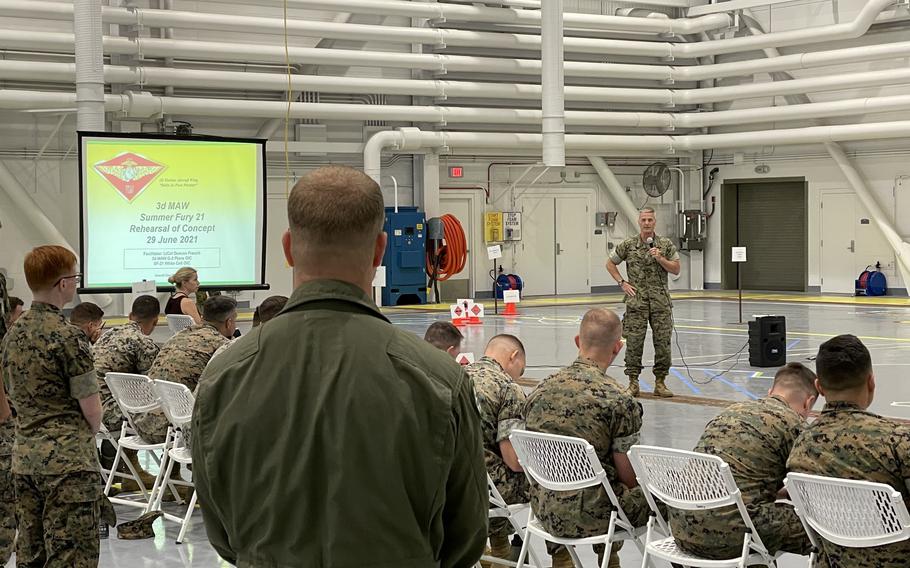