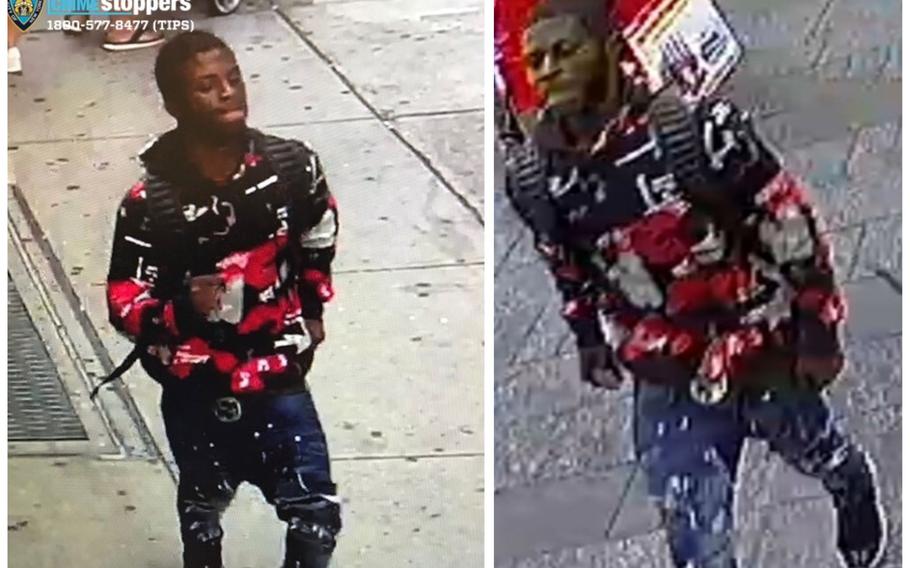 The New York Police Department is seeking the public's assistance in identifying the man in this image in connection with a shooting in Time Square. (DCPI)

The shooter held the gun in his right hand even as he fled the scene on Broadway near W. 45th St., outside the Minskoff Theatre, about 5:15 p.m. Sunday, the video shows. He has not been caught or identified.

Police said the latest shooting — just steps away from where a girl was hit by gunfire last month — was triggered by an argument between two men, possibly street vendors or performers.

The slug ricocheted and struck the 21-year-old victim in the back, sources said. Medics took Samuel Poulin in stable condition to Bellevue Hospital.

Poulin, who recently graduated The Citadel, the military college in Charleston, S.C., with a Marine Corps commission, was visiting the city from upstate with his family, including his wife.

On May 8, 4-year-old Skye Martinez and two adult bystanders were hit by stray bullets after they were caught in the middle of a vendor war between two brothers.

The accused gunman, Farrakhan Muhammad, 31, was later arrested in Florida.

Cops are asking the public’s help identifying the gunman in Sunday’s shooting. Anyone with information is asked to call Crime Stoppers at (800) 577-TIPS.