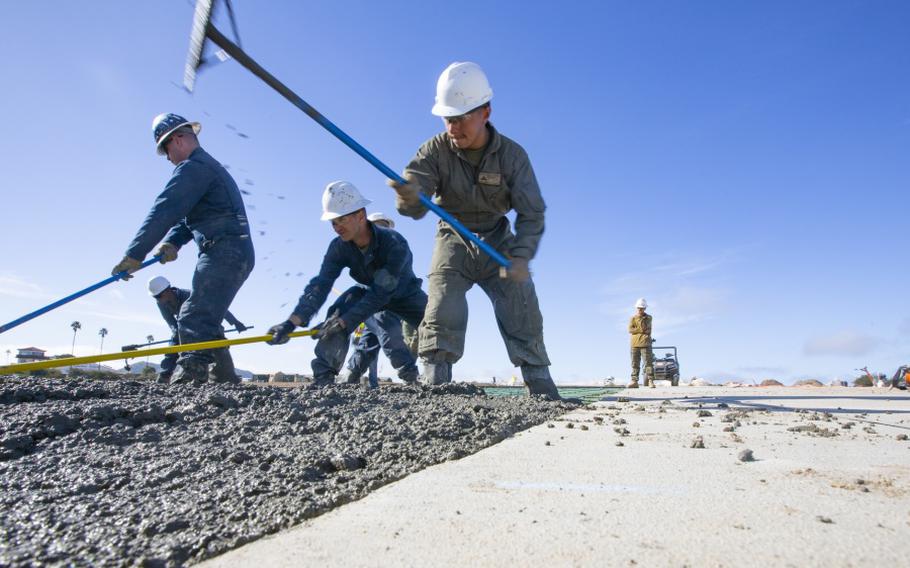 U.S. Marines prepare and spread concrete during the “Catalina Island Airport in the Sky” project at Catalina Island, California in 2019, the first of two projects on the island so far. (Juan Anaya/U.S. Marine Corps)

CATALINA ISLAND, Calif. (Tribune News Service) — A narrow, windy roadway tracing high cliffs and steep drop-offs on Catalina Island has now been shored up and is no longer at risk of washing out during rainstorms thanks to some recent work by Marines.

For the last six weeks, a group from the Marine Wing Support Squadron 373 out of Marine Corps Air Station Miramar has been digging out, smoothing and compacting roads on the island in what was real-world training for the Marines and a savings for the locals that will keep the island’s commerce, residents and tourism moving.

The project was a collaboration between the Catalina Island Conservancy, one of the state’s oldest land trusts, and the Department of Defense’s Innovative Readiness Training Program, which pairs military with civilian communities for the common good.

The project was the second for the squadron on Catalina. In 2019, a 3,000-foot runway was rebuilt at the island’s airport. Plans for more collaborations are in the works, officials said, and could include bridges, hangars and other facility construction projects.

While the road repair project helped Marines train for scenarios they might encounter on future remote island deployments, Catalina Island and the town of Avalon now have better access along several roads critical to the locals — one connecting both sides of the island and another leading to Catalina’s Airport in the Sky.

The Marines rebuilt a mile and a half of roadway along three road segments and added five new culverts to keep water off the road. One of the roads worked on, which leads to a campground and other important island infrastructure, has been cut off from Avalon for days or sometimes weeks in the past by even minor rains.

“Improvements to the interior roadway were long overdue,” Avalon Mayor Anni Marshall said. “For the visitors taking tours, employees that either live in the interior or work there, it is now a more comfortable and safe drive.”

The island’s remote location meant Marines could practice their logistics, transportation and staging. Personnel and equipment were moved in a military convoy that drove more than 100 miles to San Pedro. Then their vehicles and equipment had to be loaded up for a barge trip to the island. They lived in tents on the island’s mountaintop and set up in eight work sites.

“For us, it was awesome,” said 1st Lt. Bailey Sheppard, who heads up the squadron and its mission of aviation ground support. “It gave us a chance to do realistic training and forced us to consider things we wouldn’t have otherwise encountered. The conservancy gets a project for the cost of materials.”

Conservancy officials estimated that the road repair would have cost about $1.5 million if they had done it by hiring civilian contractors.

“During some of these large weather events, we lose sections of roads that become impassable,” said Tim Kielpinski, the conservancy’s chief operating officer. “Some are the only way to traverse the island.”

The Marines brought in all their own heavy equipment such as trucks, portable mixers and other concrete-working tools.

“A lot of the issues were because of the terrain,” said Sgt. Jake Hartley, a heavy equipment crew chief. “The roads were in bad condition. There were a lot of bumps that slowed down traffic. Fog also caused some visibility issues. A couple of the roads were along cliffsides. We had to make sure Marines weren’t too close to the edge, especially with the excavator.”

To get the network of roads back into action, Marines reshaped them. When they started, the road’s grade slanted towards the cliffs. So, the Marines reshaped it going the other way. That way, rains wouldn’t be as erosive.

To stabilize the road, they mixed concrete-like sediment with the old road surface. Water bonded it together. Then they used a grader to reshape the road and a compactor to smooth it out.

“It’s still a natural-looking roadway that the conservancy wants,” Sheppard said. “The big piece they were concerned about was that it wouldn’t wash out in a 100-year storm.”

Cpl. Joseph Mudd, a combat engineer chief, headed up the culvert project. The idea was to keep water off the roads.

“We redid most of them and added bigger pipes,” Mudd said. “The pipes they had weren’t large enough and there was erosion.”

But the engineers came up against some challenges, just like they would on a real mission.

“We had a plan, but when we got out there, we hit bedrock or trees we couldn’t remove,” Mudd said. “We had to adjust.”

Kielpinski and others from the conservancy checked in on the project and said they were impressed with how the Marines worked.

“It was really amazing to watch the improvement in their skills,” Kielpinski said, recalling a Marine who navigated an excavator along a narrow ledge where he had to balance the vehicle by using the shovel spanned across the road. “They were working between cliffs, mountainsides and traffic.”

There were some hiccups — once when there was no detour for motorists, folks had to hike three-quarters of mile to their vehicle to get out.

Despite that, Kielpinski said he was impressed with the islanders’ reaction. Typically, he said, when the conservancy has a road project, there are always complaints.

“We had a longtime local tell our CEO we should always use the Marines for projects,” Kielpinski said. “No one complained because the Marines were here. It was like they thought it was their patriotic duty.”

Now that the roads are fixed, the island’s commerce, which relies on transiting to and from the airport, will move smoothly again. Delivery services such as UPS, FedEx and others travel the roadways daily.

But, the project will also help the island deal with its expected influx of summer visitors. Over Memorial Day weekend, more than 13,000 people were booked on the Catalina Express, Kielpinski said.

“This will help all the eco-tours who come out to see the bison, fox and flora and fauna or those who go into the interior for camping,” he said.

The Marines didn’t have to go sightseeing to see the island’s biggest animal residents.

“We were in the middle of the second road segment, halfway through and a buffalo decided to walk through,” Hartley said. “He just kind of stood there and sniffed around. We had to wait until he moved on.”