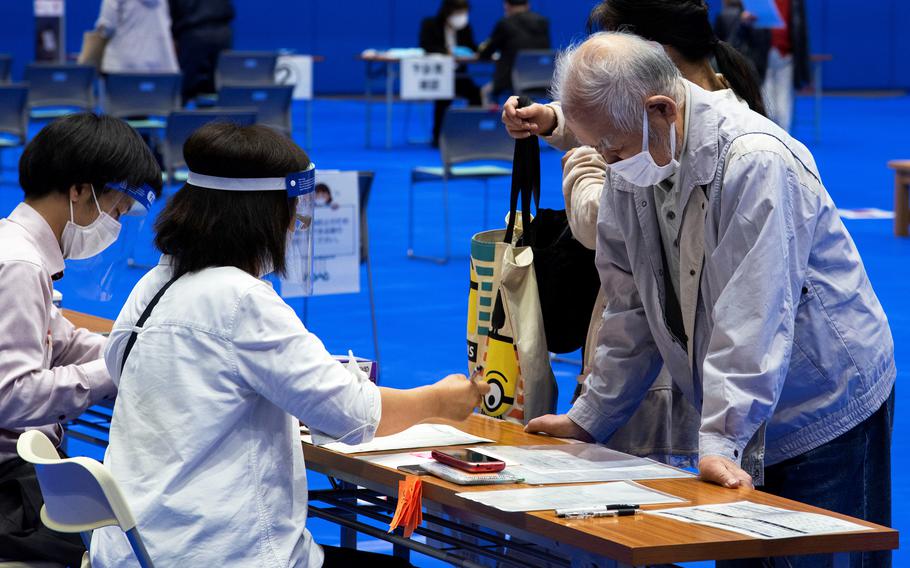 Buy Photo
A resident of Iwakuni, Japan, speaks with a medical worker before his COVID-19 vaccination at Atago Sports Complex, which is shared with the U.S. military, Thursday, May 20, 2021. (Jonathan Snyder/Stars and Stripes)

MARINE CORPS AIR STATION IWAKUNI, Japan — The city of Iwakuni began its COVID-19 vaccination drive for Japanese citizens ages 65 and older recently at the fitness center it shares with the Marine Corps.

Japan has been slow off the mark with its vaccination program. About 2% of the population had been fully vaccinated as of Sunday, according to the Johns Hopkins Coronavirus Resource Center. By contrast, about 40% of the U.S. population is fully vaccinated.

“I’m displeased with the Japanese government since vaccination in Japan is delayed compared to the United States and England," Iwao Tamura, 69, said Thursday as he waited for his first dose of the two-shot Pfizer-BioNTech vaccine at the Atago Sports Complex.

However, Tamura said he is pleased with how Iwakuni is handling the inoculations.

The city started its age 65-plus vaccination drive Thursday at the sports complex, a joint-use facility developed by the Japanese government and U.S. Forces Japan. It’s accessible to Japanese citizens and U.S. personnel alike.

“The sports complex is one of many venues where the group vaccinations will be given in the city, but it will be the venue that will hold most days of the vaccinations,” Satoe Kataama, chief of the city’s health promotion division, told Stars and Stripes by phone May 14.

“The city expects to conduct vaccinations for about 300 residents a day first and hopes to expand to a maximum of about 500 residents at Atago,” she said.

Base commander Col. Lance Lewis suggested the sports complex as a vaccination site during a visit by Iwakuni Mayor Yoshihiko Fukuda and other city officials in January, Kataama said. The city delegation came by for a look at the base inoculation clinic. 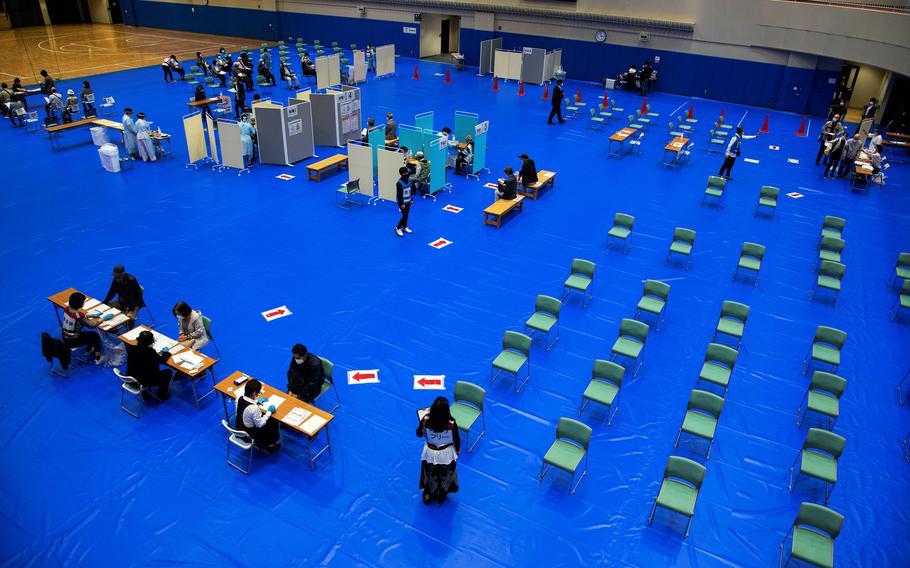 Buy Photo
The city of Iwakuni, Japan, holds a vaccination clinic at Atago Sports Complex, which is shared with nearby Marine Corps Air Station Iwakuni, Thursday, May 20, 2021. (Jonathan Snyder/Stars and Stripes)

“We invited the Mayor of Iwakuni, and representatives from his health office to the air station to see our inoculation efforts and to share the lessons we learned with our counterparts in the city,” Lewis told Stars and Stripes in an email Friday. “During the visit, our medical providers demonstrated our process of rapidly screening and inoculating personnel.”

Fukuda said the visit would help the city when preparing for mass vaccinations.

“The procedure and layout taken here will be very useful for infection control measures and an effective way to move people around when the city needs to set up a large vaccination venue, such as a gymnasium,” he said Jan. 28 after visiting the base, according to a statement on the city’s website.

The air station and the city jointly operate and administer the Atago Sports Complex as a city park.

“Throughout this pandemic, we have partnered with the City of Iwakuni to share our best practices and learn from one another,” Lewis said in his email. “Despite the difficulties of operating in a COVID-environment, the challenges of this last year have only brought us closer together with our counterparts in the local community.”