Buy Photo
Forward air-controller Capt. David Kee stands by as Marines pour out of an MV-22 Osprey to seize the airfield at Ie Shima, Okinawa, Wednesday, Oct. 7, 2020, during the Noble Fury exercise. (Matt Burke/Stars and Stripes)

IE SHIMA, Okinawa — Sgt. Cal Cushing-Hurley and his squad from the Camp Lejeune, N.C.-based 1st Battalion, 2nd Marines, could hardly contain their enthusiasm for their first Pacific exercise — a simulated airfield seizure on a tiny island off Okinawa’s northwest coast.

They were among the first wave of about 100 Marines to land at the airfield aboard MV-22 Ospreys on Wednesday during drills dubbed Noble Fury.

“I’m excited to put all of our practice into action,” Cushing-Hurley, 24, of Marshfield, Mass., said before the mission. “It’s always good to get live reps in and reinforce everything you’ve trained for.” 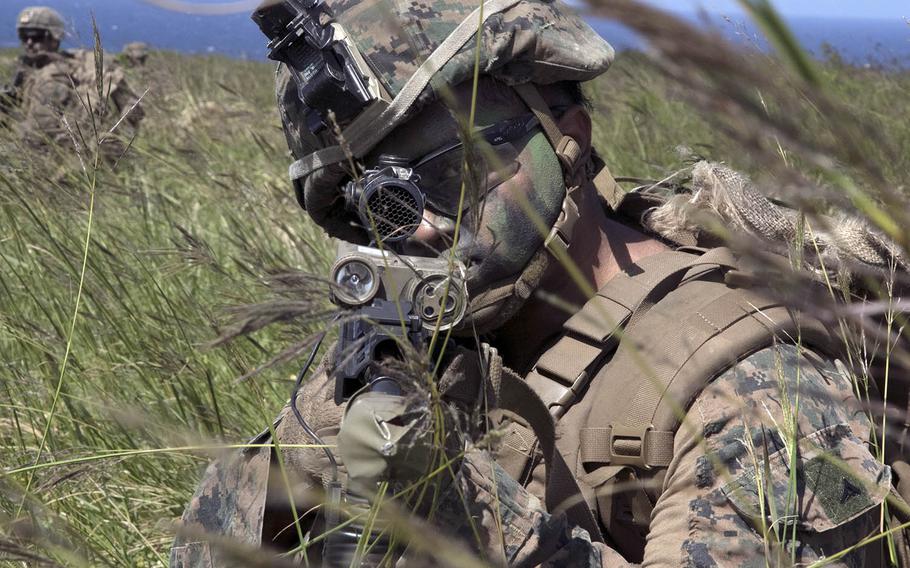 Noble Fury is a first-time joint training exercise between Marines and sailors of the III Marine Expeditionary Force and the Navy’s 7th Fleet, according to a Tuesday statement from III MEF. It is designed to improve III MEF and 7th Fleet’s working relationship through “simultaneous, distributed events.”

Primary activities include a command post exercise and field training drills like Wednesday’s airfield seizure. The exercise takes place on Okinawa and other Japanese islands, including Iwo Jima, known in Japan as Iwo To, the statement said. It concludes Oct. 15.

During the airfield seizure, Marines wore masks as a precaution against the coronavirus but were unable to maintain a minimum distance of six feet. They took off their masks once they hit the island.

First Battalion, which deployed to Okinawa in August, came to rehearse its ability to take and hold key maritime terrain from an equally matched, or “peer” enemy, and establish an expeditionary advanced base, Marine planners from the battalion and 3rd Marine Division said Wednesday.

However, in a “cultural shift” for the Corps, the Marines would then face outward and support the Navy in control of the seas, Col. Jason Perry, assistant commander of the 3rd Marine Division, said Wednesday at Camp Schwab. The tactic comes directly from commandant Gen. David Berger’s planning guidance.

“As a Marine, I’ve always kind of viewed our role as: We’re on ships; we’re looking at the shore; we get on our [amphibious assault vehicles] and boats and helicopters, and then we land; we go ashore; the Navy supports that and then we fight ashore,” Perry said.

“I think the difference now is that not only do we do that … once we are ashore, we are now in support of the Navy. We now turn our focus from just doing the land portion of that fight to looking out into the airspace and into the maritime space and supporting those fleet operations.” 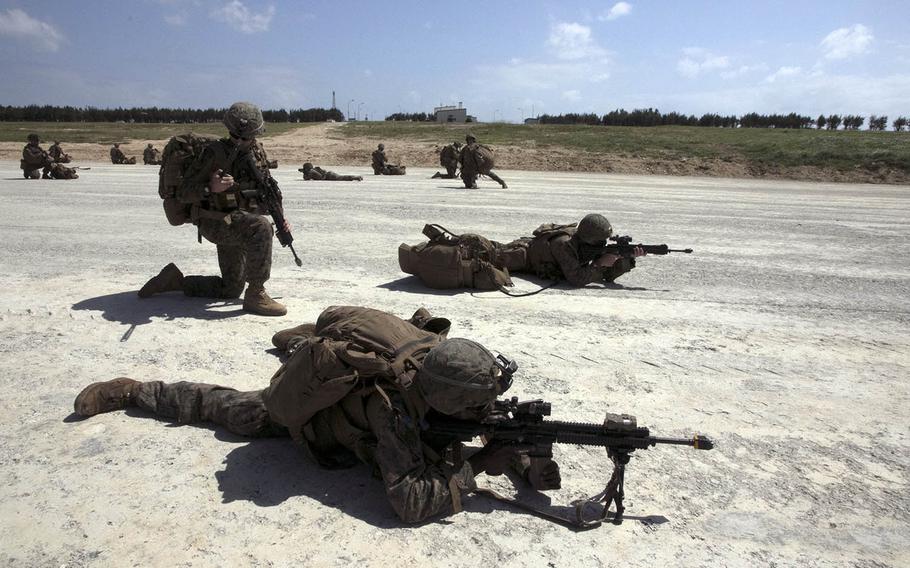 Noble Fury is also designed to reinforce the concept of distributed command and control centers, said 1st Battalion commander Lt. Col. Gabe Diana. This means having multiple command posts dispersed throughout the region, so adversaries have no chance of disrupting operations by targeting any one center.

“We’ve really worked the last 12 months to build competency in expeditionary — offense and defensive — operations, a focus on [amphibious] operations, so this provides us an opportunity to come out here and really practice our trade in very complex terrain,” he said. “It’s a well-disciplined, well trained force.”

The core group of leaders in 1st Battalion are combat veterans with experience in Iraq and Afghanistan, Diana said. Division spokesman Maj. Kurt Stahl said training prepared them to fight the next war against a peer adversary.

Marines in the field echoed the thought.

“In the future, this is something we might be tasked to do so we need to be able to conduct it and it needs to be passed on to the next generation of Marine so we do well,” said Cpl. Daniel Steele, 28, of Middlebury, Vt.

A key part of the exercise involved inserting a Marine M142 High Mobility Artillery Rocket System, or HIMARS, from 3rd Battalion, 12th Marines’ Romeo Battery to Ie under the cover of darkness Wednesday night for a fire mission.

Cushing-Hurley said he was “absolutely confident” in his squad’s ability to accomplish their part of the mission, providing security for the HIMARS, without issues.

“It’s my first time bringing HIMARS to conduct [airfield seizure] operations so I’m looking forward to that and seeing the integration between the [Marine Air-Ground Task Force] and the battalions as a whole,” he said.

Machine-gun squad leader Cpl. Nikolas Werosta, 23, from Medford, N.J., couldn’t wait to get on the Ospreys and get airborne.

“For me, it’s just about getting experience under my belt so when I get newer guys when we get back to [Camp Lejeune], to just be able to teach them, help them out,” he said. The day started early at Camp Schwab for Cushing-Hurley and the Marines of 2nd Platoon. They arrived at the Central Training Area and took positions in the woods around Landing Zone Phoenix, concealing themselves by slathering camouflage paint across their faces.

A few hours later a pair of MV-22 Ospreys arrived to ferry them to their destination.

The scenario was simple: The platoon would take and hold Ie’s long runway and airfield. It would then push out and defend against enemy counterattacks, sending security patrols spiderwebbing across the island’s grassy fields and jungle patches.

Lastly, the platoon would support deployment of the HIMARS system and depart the island the next day. No simulated opposition force awaited them.

When the time came, the Marines poured off the Ospreys and immediately hit the deck, covering all angles of the runway, rifles pointed outward in all directions. Once they had established a perimeter, they moved out into tall grass surrounding the airfield.

Forward air controllers set up communications gear in the grass and talked to incoming helicopters as the first wave pushed out into the island’s interior. Two more waves arrived behind them.

Sometime in the evening darkness, an Air Force MC-130J Super Hercules, from 1st Special Operations Squadron at Kadena Air Base, approached the island, Marine officials said. It landed on the Ie runway, which was still controlled by 1st Battalion.

Marines of Romeo Battery rolled off their HIMARS using night vision optics. They simulated firing its complement of rockets, in what is called a rapid infiltration mission, to support the Navy, and then they were gone, back aboard the MC-130J, before the simulated enemy even knew they were there.

“It’s very quick,” said HIMARS battery commander Capt. Ralph Biddle, a 31-year-old from Philadelphia. “A good crew can get on and off in well under a half-hour.”

The Marines judged the exercise a success.

“Noble Fury improves the MEF’s ability to establish expeditionary fires bases and forward arming and refueling points throughout the Indo-Pacific at any time and place, further enabling the Navy and the larger joint force in times of conflict,” III Marine Expeditionary Force commander Lt. Gen. H. Stacy Clardy III said in the Marine statement. “We must be ready to rapidly deploy in support of—and stand with—our allies and partners throughout the region.”