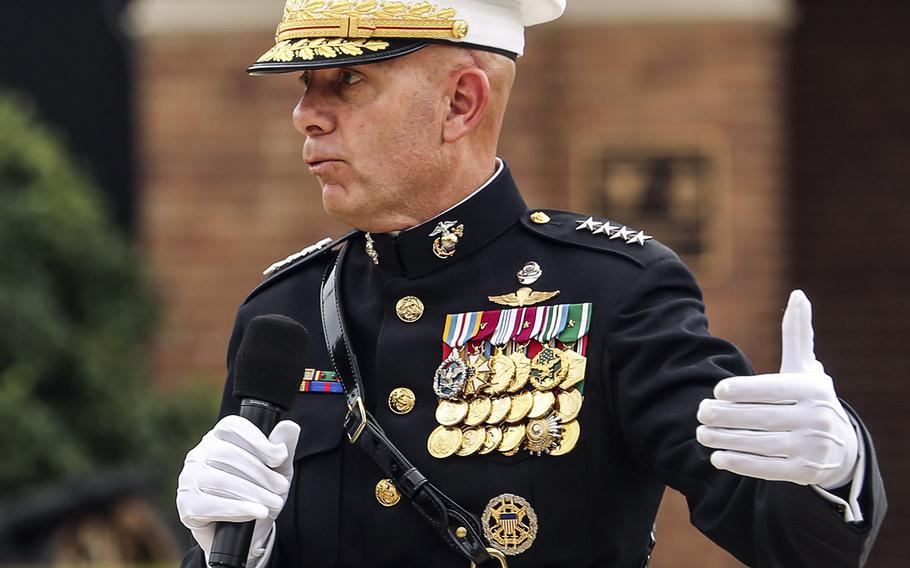 Gen. David Berger, 38th commandant of the Marine Corps, speaks during a passage of command ceremony at Marine Barracks in Washington in July. (Robert Knapp/U.S.Marine Corps)

Marines will likely get greater clarity in the coming months on the commandant’s bold new vision for a leaner and meaner force to fight near-peers like China and Russia in contested waters and on coastlines.

Gen. David Berger outlined a dramatic reshaping of the Marine Corps in guidance published last summer, and in December published early notes on an expected 10-year effort to modernize the service and align it with the National Defense Strategy. He promised the first results of a force design, based on wargaming and analysis, would be coming this spring.

Berger’s guidance has touched on other changes he intends to make across the force — including revamping its industrial-era manpower system — but his top priority is designing a force suited to evolving threats, especially in the Indo-Pacific theater.

The success of those efforts will likely depend heavily on the details, which at the moment are hard to come by.

At Marine Corps Combat Development Command, Capabilities Development and Integration, officials could not disclose details of the force redesign efforts, the command said in a statement in December.

“That kind of stuff is much more cloudy now,” said McGrath, managing director of The FerryBridge Group, which provides consulting services to the Navy. “I think you can imagine that things will be smaller, things will be faster, there will be more unmanned than there was before.”

But it’s unclear, for example, whether Berger’s plans will require shedding a number of large amphibious ships to pay for itself, McGrath said, or if that would put it at odds with President Donald Trump’s desire for a 355-ship Navy — a goal that acting Navy Secretary Thomas Modly said the service should aim to reach in a decade.

Berger has said he is willing to trade force structure for modernization dollars if necessary. He also has declared an end to the Corps’ insistence on having 38 amphibious warships to support an invasion force made up of two Marine Expeditionary Brigades.

He left no quarter for concepts the Corps has held dear for decades, such as the Marine Air-Ground Task Force, the service’s principal organizing structure for all missions, which includes command, ground combat, aviation and logistics elements. That formation, first formulated in the 1960s, cannot be the default response to crises, he said in his planning guidance, which called for closer integration with other services, even at individual unit levels.

Driving the sweeping changes is the possibility that the U.S. military might not control the sea in a future conflict, as adversaries improve their ability to deny U.S. freedom of movement or target its ships with long-range, precision weapons.

Such capabilities could keep the Marines’ large amphibious ships at bay, or force them to disperse landing forces and consolidate them later inland, said B.A. Friedman, a military analyst who focuses on amphibious warfare.

“The problem is that the U.S. military is currently equipped for [large-scale] amphibious assault and lacks some of the smaller craft and ships that would be more conducive to [smaller-scale] amphibious raids and other forms of amphibious operations,” he said.

Early indications suggest the Corps is overinvested in manned platforms and transports, the commandant said last month, while it’s invested too little in unmanned systems for lethal or logistical missions on land, sea and air.

But planners will need to strike the right balance between older manned systems and new unmanned technology, McGrath said. Wider use of automated or remotely piloted craft could “lower the bar for conflict” compared to use of those carrying thousands of sailors and Marines, each with a “beating American heart,” he said.

“We run the risk of becoming less effective as a deterrent,” McGrath said. “We may become more effective as a warfighting force, but how you deter and how you fight aren’t always the same things.”

McGrath and others expressed early enthusiasm for the commandant’s ambitious goals, which Berger said will involve “substantive change” over the next four years aimed more closely integrating with the Navy and getting the Corps’ sea legs back after nearly two decades of operating largely as a second land army.

While fighting in Iraq and Afghanistan since the early 2000s, the Corps has often operated as if it was supported by the Navy, rather than a support to it, McGrath said. Berger is looking to flip that dynamic.

Naval integration is seeing renewed focus at the Corps’ Training and Education Command, which was in the process of ensuring Marine Corps doctrine aligns with that of the Navy and joint forces, said Tom Hartshorne of the command’s policy, standards and doctrine division. TECOM would incorporate into the doctrine new operations concepts related to the commandant’s guidance, he said.

The command is also working to strengthen partnerships with Navy counterparts. It may decide to increase the number of Navy officers attending Marine Corps schools and augment its education command with a Navy captain, Hartshorn said.

Berger’s vision would ultimately seek to integrate the Marine Corps as a naval weapons system, like the carrier strike group or submarine forces, McGrath said.

Berger believes that “in the synthesis of those two forces (the Navy and Marine Corps) is a very powerful conventional deterrent and warfighting force,” McGrath said. “I think he is absolutely right.”