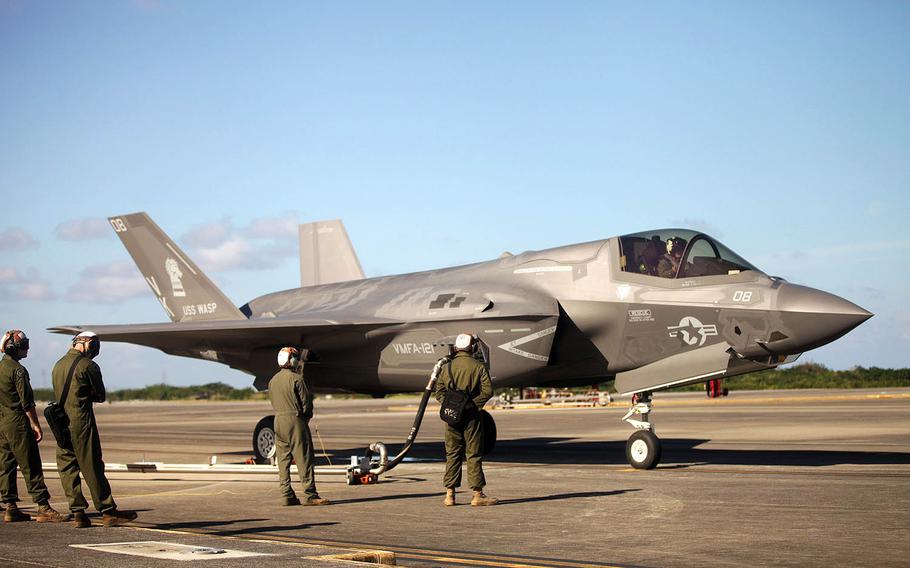 An F-35B Lightning II has landed at Marine Corps Air Station Futenma, marking the advanced stealth jet’s first visit to the Okinawa base.

U.S. Forces Japan released a photograph of the aircraft from Marine Fighter Attack Squadron 121 — the “Green Knights” — at Futenma on Tuesday.

“An F-35B landing at MCAS Futenma demonstrates the air warfighting capability, operational flexibility and tactical supremacy that this platform brings to the Indo-Pacific region, our allies and our partners,” the photo’s caption said.

The short takeoff/vertical landing F-35Bs have been operating out of Marine Corps Air Station Iwakuni since January 2017 and have notched a number of milestones, including their first operations this spring from the Sasebo, Japan-based USS Wasp amphibious-assault ship.

Meanwhile, the Japan Air Self-Defense Force began flying its first F-35As, which perform conventional takeoffs and landings, from Misawa Air Base on northern Honshu in January. Japan had planned to buy 42 F-35As to replace its fleet of 60-year-old F-4 Phantom II jets. However, the U.S. ally is in the market for another 100 F-35s, to replace aging F-15s, according to a Wednesday report in the Nikkei Asian Review.

Japan’s government is concerned about China’s growing military might and has faced pressure from President Donald Trump, who wants Japan to buy more U.S. military gear to balance trade between the two countries.

Experts have speculated that Japan could upgrade its massive helicopter destroyers – the JS Izumo and JS Kaga – to carry F-35Bs.

Nikkei reported that F-35Bs were part of the purchase plan and that the ships would be revamped to accommodate them.