CAY SAL BANK, Bahamas (Tribune News Service) — High above a remote uninhabited Bahamian island, a U..S. Coast Guard air crew on patrol watches as a man and small child fish from a white-sand beach. A twin-outboard engine cabin cruiser is anchored in a cove just a few feet from shore.

Using cameras mounted on the C-144 Ocean Sentry, pilots and radar operators watch from about 1,500 feet as the two stand on the sand, rod and reel in hand, waiting for a fish to bite. Then the man and child notice the plane circling above. They drop their fishing gear and run toward trees.

“It’s very peculiar,” Lt. Spencer Zwenger says as he pilots the plane and watches what’s happening on the beach below.

The pilot positions the plane — a twin-engine turbo prop that the Coast Guard uses for search and rescue and law enforcement patrols — at a different angle, and the cameras catch more people hiding beneath a tropical tree canopy.

“Oh, there’s more than two people,” Lt. Cmdr. Joshua Mitcheltree says from the right seat of the cockpit, after spotting the others gathered in the tree line.

The people below are likely migrants that, for unknown reasons, stopped at Cay Sal Bank, an arrow-shaped atoll located about 30 miles from the northern coast of Cuba, on their way to South Florida. The Coast Guard crew above was on a routine patrol mission on Jan. 14.

The boat, a factory-built pleasure craft and not a makeshift migrant vessel, also indicates to the crew that the people are not on their own, but taken to the island by paid smugglers.

“It’s a nice boat in this graveyard of boats,” Zwenger says, noticing a growing number of smashed migrant vessels that have been gathering on Cay Sal and other isolated Bahamian islands — reminders of the ongoing exodus of Cubans and Haitians on the way to the Florida Keys and South Florida. 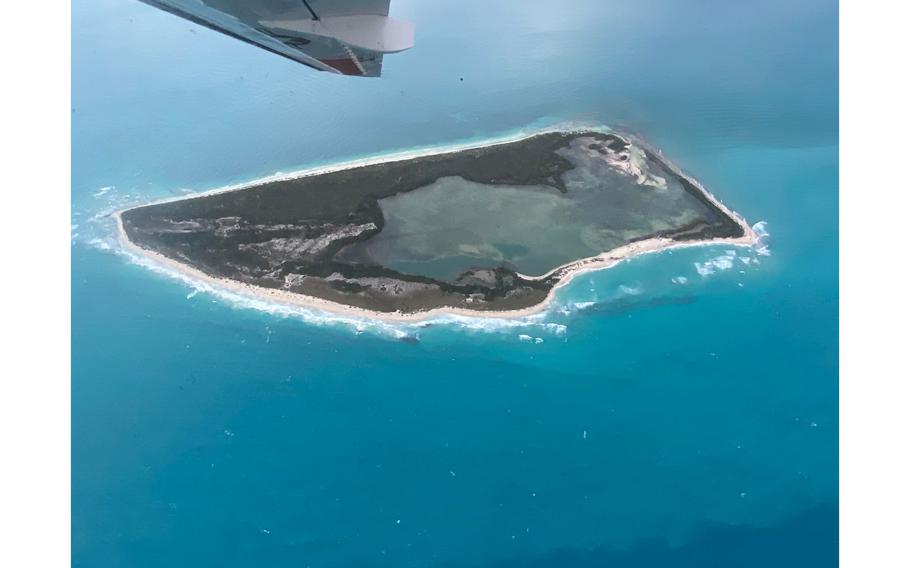 Lt. Cmdr. Derrick Ferguson with the Royal Bahamas Defense Force said the Cay Sal Bank area just off the north coast of Cuba is a traditional “transshipment point” for people leaving Cuba for the United States. It includes Cay Sal Bank, Elbow Cay and a group of small islands called the Anguilla Cays.

But there has been a “significant uptick” in migrants arriving there over the past three to four months — coinciding with the increase in landings in the Florida Keys, Miami-Dade and Broward.

“Sometimes, between navigational errors, sea conditions or mechanical issues, they will be left marooned on one of those cays inside Cay Sal Bank,” Ferguson said.

As the area becomes more of a zone for scrutinizing Coast Guard and Royal Bahamas Defense Force patrols, Cuban migrants are increasingly using routes far to the east and north of the traditional maritime path to South Florida, a trend that concerns Ferguson.

“Which means they are taking longer journeys at greater risk, which could increase the incidence of tragedy and loss of life at sea,” he said.

The increase in migrants from Haiti and Cuba — two countries with deepening economic and social crises — has escalated so much since the holidays that Gov. Ron DeSantis activated the Florida National Guard. He ordered the agency and other state law enforcement agencies to the Keys to help patrol the surrounding waters for incoming migrants moving through the Florida Straits. Nine months ago during another flyover, Cay Sal Bank looked like any remote Bahamian island in the middle of the ocean. But these days, the island and the nearby islands of Elbow Cay and the Anguillas have become landmarks of increased Cuban migration and offer a clue on how migrants may be making the journey. The islands appear to be stopovers for migrants, or a place for them to wait when things go wrong with their journey to the United States. The islands have become littered with abandoned boats.

Sometimes migrants are forced to seek refuge on the islands because of weather or because of a boat breakdown. Last February, the Coast Guard rescued three people who had said they were stranded on the island for 33 days and survived by eating coconuts.

But as the migration to South Florida increases, the Anguilla Cays, Cay Sal Bank and Elbow Cay are also being used as a launching pad for smugglers who have migrants wait there until they can be transported for the rest of the journey.

Other tell-tale signs that people have been camping out on the islands include discarded clothing, tents and parachutes from Coast Guard planes dropping supplies to the stranded. Supplies meant for stranded mariners and migrants are set in the back of a U.S. Coast Guard C-144 Ocean Sentry plane Jan. 14, 2023. (David Goodhue, Miami Herald/TNS)

From there, the plane flies up to the Florida Straits, covering the roughly 100-mile-wide distance west, then cutting back east, overlapping the same route, looking for migrant boats. It’s a group effort, with the pilots looking out the windows of the cockpit, along with video screens on their console, Carty and Angell sitting in front of video and radar screens in the middle of the plane and Williams scanning the horizon out of the two bubble windows in the back.

If the crew determines people on an island or in a disabled boat need help, it’s Williams’ job to lower the back ramp door and drop supplies — food, water, blankets, a radio — to the distressed below.

Despite all of the eyes and technology aboard the C-144, it’s a very big ocean with thousands of boats on the water for legitimate reasons. It’s not hard for migrant vessels to slip past their view.

“The smaller ones, sometimes you don’t even see on the radar,” Mitcheltree says.

Over the course of this latest chaotic maritime exodus from Cuba and Haiti, the Coast Guard has been “playing goalie” in its effort to spot migrant vessels before they reach the United States. Cuban boats are getting through because of the overwhelming numbers leaving daily. And larger Haitian freighters are reaching, or getting close to, the U.S. because they’re often piloted by smugglers who are seasoned sailors.

“They know what they’re doing,” Zwenger says of the Haitians, who also credit their belief in vodou to their boats’ arrival. “They’re professional mariners.”

On this patrol, no migrant boats are spotted at sea, but something else captures the crew’s attention. It’s a “mothership” Bahamian shrimping trawler towing several smaller boats that break off to fish and return to the bigger vessel to offload their catch.

The trawler is near the shoreline of the Anguilla Cays, a group of sandy, small islands near the southeastern-most point of Cay Sal Bank.

Carty and Angell scan their cameras along the beach. Suddenly, a makeshift migrant boat appears on the sand. It resembles the homemade Cuban “chugs” that have been left behind on the shore and in the mangroves up and down the Florida Keys for the past two years after migrant drop-offs.

About four men stand on the beach. As the plane continues circling the island, about a dozen more people are standing underneath stunted palm trees. One of the smaller shrimping boats is anchored just a few feet from shore. Two crewmen swim to the beach to check on the migrants.

The Ocean Sentry is finally able to reach the captain of the mothership by radio, who relays that his crew is providing the people on the island with food and water, and that they all appear to be in good health.

Petty Officer Nicole Groll, a Coast Guard spokeswoman on the plane during the patrol, says that because the U.S. and Bahamas have a “long-standing partnership,” the Coast Guard notified Bahamian authorities that the people were on the island and did not need immediate medical attention.

“What happens next,” Groll says, “the Bahamian authorities will go out there or they will ask us for assistance, and we will do our best to help.”

A 40-year-old Coast Guardsman, Mitcheltree was a helicopter pilot before moving on to the Ocean Sentry, and he was an elite rescue swimmer before going into aviation. He said each mission is unpredictable, and it’s hit-or-miss whether he and his crew will encounter migrants on any given patrol.

“The last time I flew, we found nothing,” he said. “This time, we found these two groups.”

Before heading back to Miami, the crew returns to Cay Sal Bank to make sure a supply drop isn’t necessary.

After seeing the people run from the C-144 earlier in the day, Zwenger and Mitcheltree want to be careful not to spook the boat driver on the second go-around in case, like they suspect, he is a smuggler. If that happened, he’d likely leave his human cargo on the island and at the mercy of the elements.

“Smugglers only care if they get paid,” Mitcheltree says. “If they think that they’re going to get caught, they’ll skedaddle in a heartbeat.”

The pilots hide out in the low cloud ceiling before dipping down slightly so the aircraft’s cameras can get a clear view of the beach. The people below don’t appear to be distressed. If they were, they’d likely wave frantically at the plane above. For now, they don’t seem to want a rescue. Like with the people in the Anguillas, the plane’s crew reports them to the Bahamians.

“The boat’s still there and the people are still there,” Mitcheltree says. “They got a nice little fire going.”

As the temperature drops inside the plane on this January evening, Zwenger responds: “Good for them. It’s going to be a cold night.”