(Tribune News Service) — The U.S. Coast Guard and the Huntington Beach Fire Department rescued a dozen migrants from a boat that washed ashore in Orange County on Tuesday, according to authorities.

A lifeguard with Huntington Beach Fire Department’s Marine Safety Division spotted a boat that appeared abandoned floating off the shore of Sunset Beach on Tuesday evening, said Jennifer Carey, a spokesperson for the city of Huntington Beach. Upon boarding, the lifeguard found 12 people on the ship and called the Coast Guard, Carey said.

Crews were dispatched to the scene at around 6:30 p.m., Carey said. The Marine Safety Division helped the Coast Guard tow the boat into Huntington Harbor just north of Sunset Beach, Carey said. The Orange County Sheriff’s Department was also at the scene.

KCBS-TV Channel 2 reported that 10 of the people aboard were Mexican citizens, and one person was a Colombian citizen, all between the ages of 19 and 40. Seven were male and five were female, the TV station reported.

The Huntington Beach Fire Department does not release the names or ages of the people it treats, Carey said. The Coast Guard could not be reached early Wednesday.

Seven people were treated on scene for minor injuries, and two people were taken to hospitals, Carey said. Their status was unknown Wednesday morning.

It was not clear what type of boat it was, Carey said. 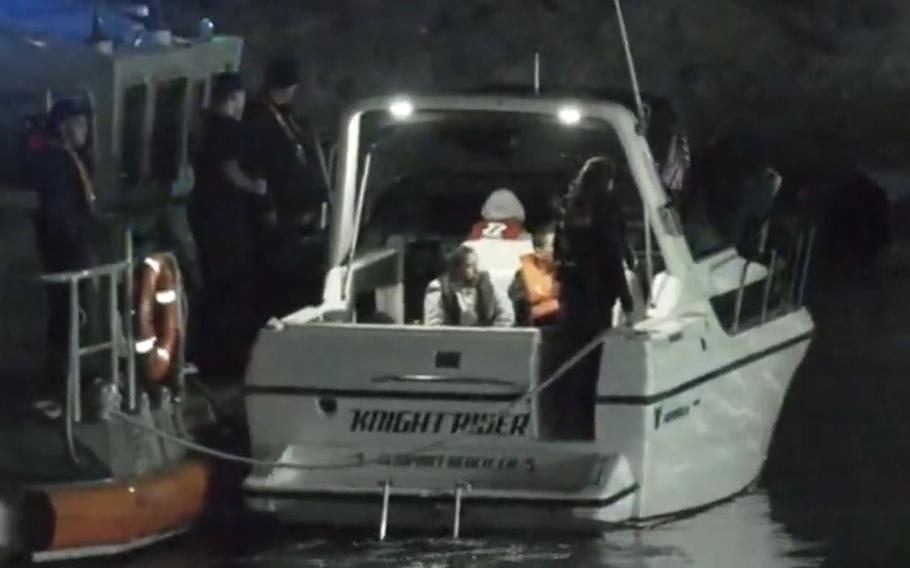 The U.S. Coast Guard and the Huntington Beach Fire Department rescued a dozen migrants from a boat that washed ashore in Orange County on Tuesday, according to authorities. (Screengrab from YouTube)