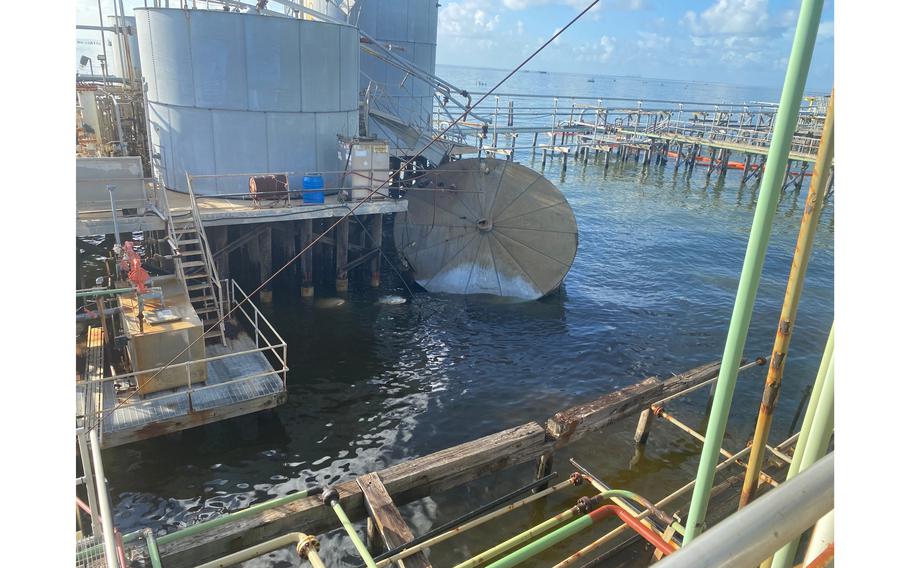 The Coast Guard is responding to an oil spill after an oil tank platform collapsed at the Hilcorp Caillou Island facility in Terrebonne Bay, La., Aug. 8, 2022. (U.S. Coast Guard)

Caillou Island is an open-water area where several oil platforms are located.

In a Tuesday morning press release, the Coast Guard said there have not yet been reports of wildlife impacts, but a marine safety information bulletin issued by the agency on Monday night warned that spilled oil was projected to drift west, “cross the Houma Navigation Canal between miles -1 to 5, and enter Lake Pelto with shoreline impacts by mid-day” on Tuesday.

The Coast Guard’s National Response Center notified the agency’s Houma marine safety unit on Monday that “the platform experienced a structural failure causing a tank to fall into the water and spill the oil.” The information reported to the center was not yet posted on its public list of emergency incidents, which on Tuesday had not been updated since July 31.

“The exact cause of the incident is still under investigation,” according to a Coast Guard news release.

The company did not immediately respond to a request for comment.

Hilcorp filed more than a dozen reports with the response center in 2021 in the days after Hurricane Ida, reporting the release of crude oil or the spotting of sheens at six locations in Terrebonne Parish, six in Plaquemines and four in Jefferson.

The company also was identified by the Coast Guard in March 2017 as the owner of an abandoned well leaking oil and gas near the mouth of the Mississippi River.

Hilcorp also agreed to pay Louisiana oyster growers $920,000 in the 2018 settlement of a lawsuit over the company’s dredging through oyster-growing areas without a permit in 2016.