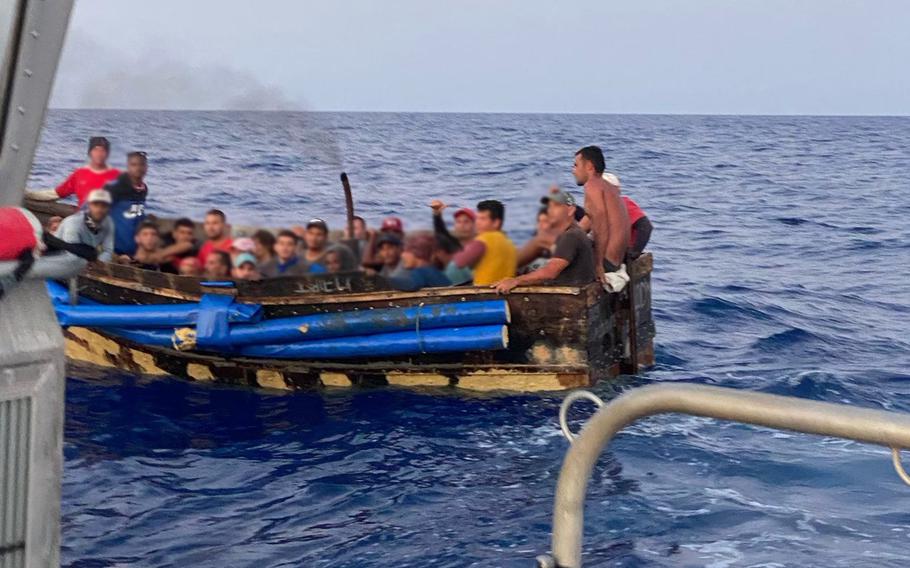 (Tribune News Service) — The U.S. Coast Guard sent 45 people back to Cuba on Sunday after stopping them off the Florida Keys last week.

They were found in four boats on Wednesday and Friday as U.S. authorities report the largest exodus of Cubans since 2016.

On Friday, civilians reported three additional rustic boats to authorities in a 15-minute span. At 11:45 a.m., the first one was found 17 miles south of Long Key. And at noon, two were spotted 17 and 22 miles respectively south of Big Pine Key.

Once aboard a Coast Guard cutter, all migrants receive food, water, shelter and basic medical attention, according to the agency.

“The possibility of being stopped by Coast Guard crews while illegally migrating through the Caribbean Sea is high,” Lt. Commander Mark Cobb of the Coast Guard Seventh District said in a news release. “No one should risk their lives on unsafe rustic vessels in unpredictable seas.”

The Coast Guard tallies the number of migrants detained at sea by fiscal year, which begins Oct. 1 and ends Sept. 30 of the following year. Since Oct. 1 of last year, Coast Guard crews have stopped 2,464 Cubans compared to:

On Tuesday, the Coast Guard returned 52 people to Cuba after stopping five rustic boats and one inflatable vessel off the Florida Keys.

On June 10, three vessels were detected in less than four hours. At 10:30 p.m., a Customs and Border Protection aircrew located a boat 17 miles south of Boot Key, and at noon, a civilian reported seeing another seven miles south of Key West. At 2 p.m., a Coast Guard crew detected a vessel taking on water 35 miles southwest of Key West.

And at 9:30 p.m. on June 11, a civilian notified the Coast Guard about an inflatable vessel 30 miles south of Islamorada.