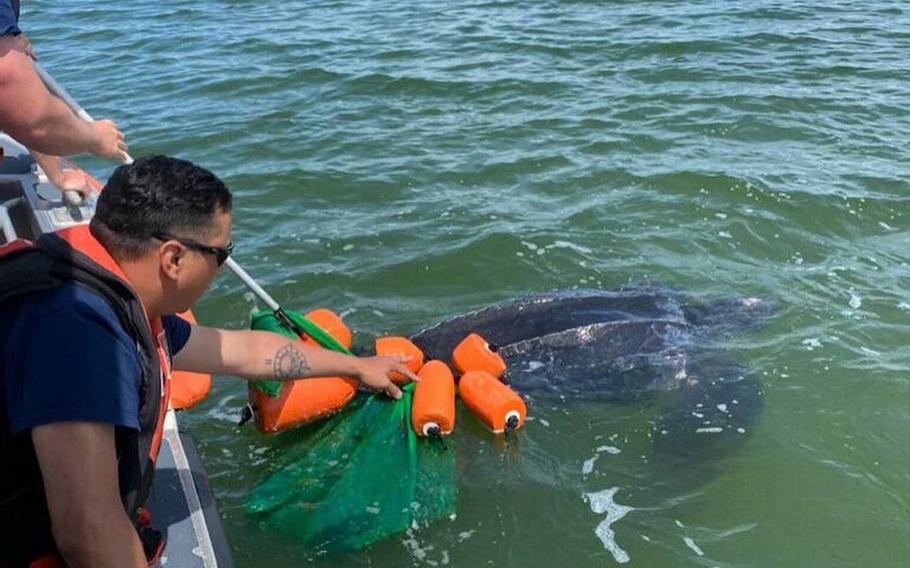 “It was the biggest turtle I’d ever seen,” Coast Guard Petty Officer Chad Austin, one of the rescuers, told the Nantucket Current.

A group of friends boating in the harbor spotted the turtle trapped in a string of buoys Saturday afternoon and phoned the Coast Guard, the Current reported.

Coast Guardsmen contacted the Marine Mammal Alliance Nantucket for guidance on how to free the marine reptile, which had rope attached to the buoys wrapped around her back and fin.

After untangling the turtle’s neck and cutting away the rest of the rope, Austin said he found that in addition to five orange buoys, the animal was also hauling four cinder blocks they were fastened to.

The buoys were connected to spat bags — mesh bags involved in raising scallops — that belonged to the Nantucket Natural Resources Department, the Current said. Jeff Carlson, the department’s director, called the incident a “freak” occurrence and said it was the first time an animal had been entangled in a spat bag.

The turtle was not only entangled but was dragging four cinder blocks along the seafloor that were attached to the lines pic.twitter.com/EoBOUtrRmz