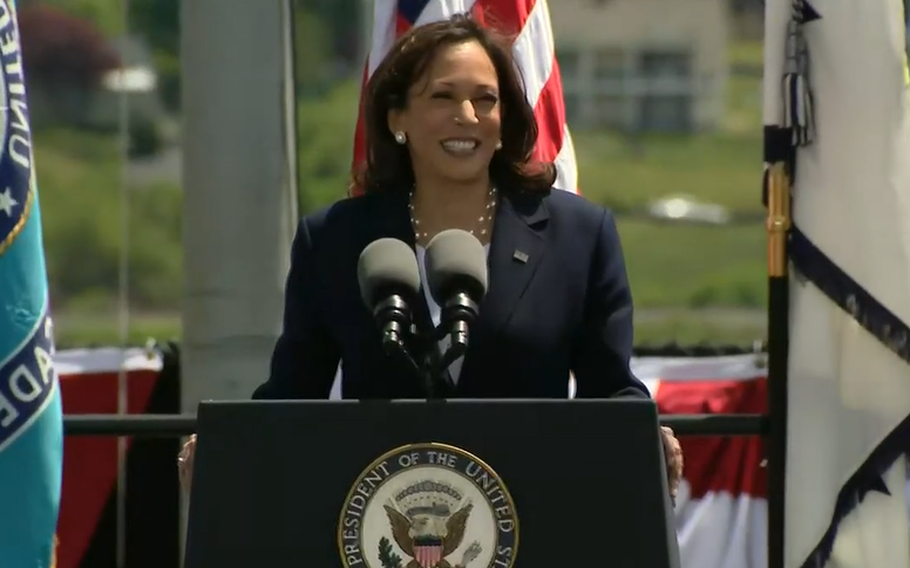 NEW LONDON, Conn. (Tribune News Service) — Vice President Kamala Harris addressed members of the U.S. Coast Guard Academy’s Class of 2022 at their commencement Wednesday, talking about how they will lead in an “unsettled world” after four unusual years at the academy.

Graduates in their first year experienced the longest U.S. government shutdown in history and stepped up to help local Coast Guard members, in their second year were abruptly sent home at the start of the COVID-19 pandemic, and in their fourth year saw the Russian invasion of Ukraine — the native country of one of their own.

And now they have graduated, with the nation’s first female and first Black vice president as the keynote speaker for the academy’s 141st commencement exercises.

“Your four-year cadet experience was unlike any other,” Coast Guard Commandant Adm. Karl Schultz told the class of 252 graduates on Wednesday, a sunny and 70-degree day. He said the academy experience is taxing in normal times, between the rigorous academic programs and athletics.

Schultz is set to retire at the end of this month after a 39-year career in the Coast Guard, and his successor is Adm. Linda Fagan, who will be the first woman to lead an armed service.

Harris congratulated the cadets on completing a “remarkable journey.” She flew in to Groton-New London Airport and walked onstage at Cadet Memorial Field about 11:15 a.m., after the graduating first-class cadets marched in.

“You will graduate into a world that’s going to need your leadership, one that is full of possibility and the promise of progress,” Harris told the graduates Wednesday. “At the same time, the world you graduate into is unsettled. It is a world where long-established principles now stand on shaky ground, where the rule of law in places is strained, where rules and norms are under question.”

She talked about Russia’s invasion of Ukraine, and how she thinks we have taken the international rules-based order for granted far too often.

“Frankly, sometimes we forget how rare it is, in human history, to have a period of relative peace and stability among the nations,” Harris said. “We must remember: upholding a system of laws, institutions and common understandings, this is how we secure the safety and security and prosperity of the United States, and this is how we preserve stability in the world.”

This is where the cadets come in, the vice president said.

For example, she chaired a meeting in Washington, D.C., last week with nine leaders on Southeast Asia and “spoke with them about the United States Coast Guard, about you, with pride.” Harris noted that the U.S. is sending additional Coast Guard personnel to the region to help build law enforcement capacity and launching new initiatives to cut down on illegal fishing.

But she said if the U.S. is to be strong abroad, it must be strong at home, and “every single American, in addition to you cadets, has a role to play in bettering our nation.”

Harris said Wednesday was a joyous occasion but it was impossible to ignore the “horrific attack of hate” in Buffalo, N.Y., on Saturday. A white 18-year-old opened fire with a rifle at a supermarket, killing 10 people and wounding three others in what authorities described as “racially motived violent extremism.” Harris called it another despicable attack in what she fears is an epidemic of hate.

But she looks at the cadets and sees “the very best of America,” individuals who have entered as many but will leave as one, she said. And she noted they are uniquely suited to the task at hand, both growing up online and in the post-9/11 era, with threats from the climate crisis and the pandemic.

“You are familiar with a world that frankly feels strange and so new to so many of us,” Harris said. “I believe you have the ability to see what can be unburdened by what has been, to learn from the past but not be limited by it, to identify new opportunities for our Coast Guard to lead both in today’s unsettled world and far into the bright, beautiful future. We need your perspective and we need your expertise.”

Among the Class of 2022, 39% are women and 36% are underrepresented minorities, with the largest number of Asian Americans and Pacific Islanders in academy history. The class includes 12 graduates from Connecticut, and nine from other countries: Cambodia, Iceland, Jordan, Mexico, Madagascar, Palau, Panama, Rwanda and Ukraine.

Anton Kononuchenko from Ukraine got particularly loud applause as Superintendent Rear Adm. William Kelly read the names of cadets from other countries, and a standing ovation when walking across the stage to accept his degree.

“We stand with you, Anton,” Kelly said.

After the ceremony, Kononuchenko told reporters he is flying back to Ukraine on Thursday, and his shoulder boards will be waiting for him in Kyiv. He will be commissioned into the Ukrainian military.

“It is a new chapter of my life, and I’m ready to walk into it and do my best,” he said. He said the Coast Guard Academy cadets are all his family, and the support he’s gotten warmed his heart.

Asked if his family is safe, Kononuchenko replied, “More or less. I guess no one’s safe in Ukraine right now, but they’re alive.”

Distinguished Graduate Logan Tobias, the graduate with the highest grade point average, said in his speech, “Continue to be brave, Anton. Fortune will favor you soon enough.” Tobias was referencing the class motto, “Fortune favors the brave,” which Kelly also talked about.

“If you are brave enough to do right by your people, if you care for them, if you prepare them, if you set high expectations for them, and if you challenge them to be great,” Kelly said, “then fortune will most certainly favor the brave, and your unit, the Coast Guard and our nation will be most certainly be stronger for it.”

Secretary of Homeland Security Alejandro Mayorkas told the graduates, “Each of you has the opportunity, and in the fact the responsibility, to build a better Coast Guard.” He added, “you will lead with honor, and honor will be the reward for what you give.”

The Class of 2022 is the first graduating class with officers from the cyber systems major, which was created in 2018.

As graduates took the oath of office, they were commissioned as Coast Guard officers, transitioning from cadets to ensigns. Most cadets are going to cutters, while some are headed to a Coast Guard sector or to flight school.

From growing up at the academy to graduating from it

Gonzalez said she pretty much grew up on campus: Her father is Coast Guard Academy English professor Jose Gonzalez, who immigrated from El Salvador to New London at age 8.

Olivia Gonzalez said when she was growing up, her family sponsored Honduran cadets at their house, and seeing the kindness of cadets and the family atmosphere, “I knew I wanted to be a part of that.” In her time at the academy, she was involved in Compañeros, an affinity group with a focus on Latino culture; a member of the diversity peer educator program; and part of the crew team.

Graduates were allowed 10 guests each this year, compared to four last year. That meant that Merrill Cline of Ohio had the support of both parents, two grandparents, two aunts, an uncle and a sister in the bleachers.

Kristin Cline said her daughter grew up sailing and only applied to the Coast Guard Academy; she knew once she visited this was where she wanted to come.

Fitzgerald Johnson said his daughter, Serheni’te Johnson, has an Army dad and Air Force mom but is the first person in the family to go into the Coast Guard. He said she always wanted to be an engineer growing up, and had gotten involved in robotics and was a junior member of the National Society of Black Engineers.

At the academy, Johnson majored in mechanical engineering, played rugby and, for her senior project, designed an emergency evacuation system for boats.

“We’re proud of her in so many different ways,” Fitzgerald Johnson said.

Secretary of Homeland Security Alejandro Mayorkas’ title has been corrected in this story.