As sea crossings by Haitian and Cuban migrants increase, so do US Coast Guard patrols 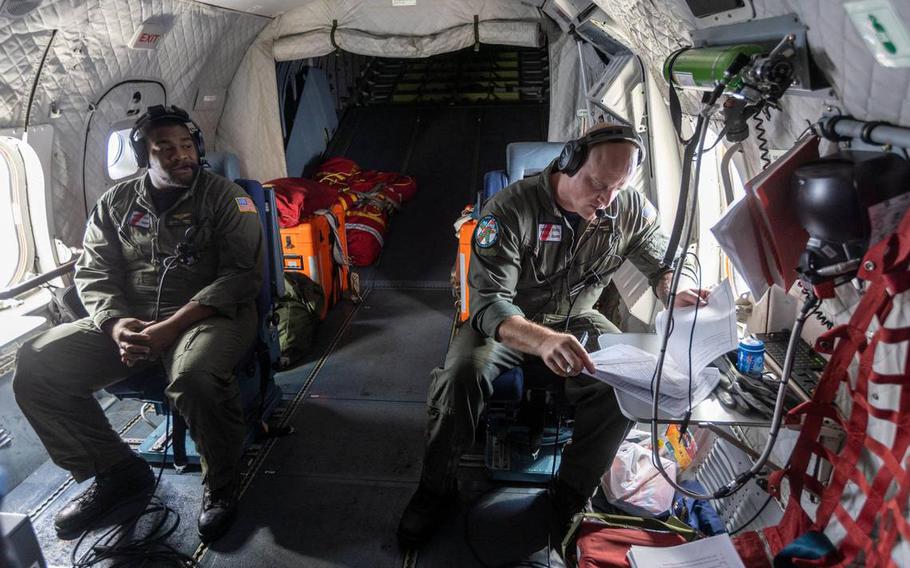 Two members of the crew of a US Coast Guard HC-144 Ocean Sentry airplane while on a reconnaissance flight over the Florida Straits and the Bahamas. (Jose A. Iglesias/Miami Herald)

MIAMI, FL (Tribune News Service) -- The white speck appears on the radar screen, bobbing in the surf far below as the waves crash into one another in the deep blue waters of the Florida Straits. A U.S. Coast Guard aviation electronics technician, manning the screen, leans forward for a closer look while cameras from the HC-144 turboprop airplane zero in.

A few minutes go by and the crew is still trying to determine if what is obviously a vessel is a fishing boat — or a migrant smuggling operation in process. Lt. Katrina Prout, the pilot, has already circled back once, and the crew decides it’s a false alarm. It’s a fishing boat.

As the number of Haitians and Cubans risking their lives at sea to reach the United States surges, the U.S. Coast Guard is stepping up its patrols to respond to the influx. On Friday, a five-plus hour patrol by air yielded two false alarms in the Florida Straits and one possible smuggling boat, left abandoned on Anguilla Cay in the Bahamas, the same place where last year three Cubans were stranded for 33 days. That’s an unusually quiet day compared to recent flights, Prout said.

Some days it’s like this. Choppy waters, cloudy skies and no migrant vessels. Some days, there may be a boat out there, but it could easily be missed because of weather conditions and because the ocean is so vast.

“It’s the luck of the draw,” Prout said, noting that when the crew of six does spot a boat, they will alert a nearby cutter while assessing the vessel’s stability from the air. “It largely depends on our radar. When you have a lot of waves, a lot of noise on the radar, it’s hard to figure out sometimes what’s a boat, and what is not.”

Flying 300 feet above some of the Bahamian cays and 1,500 feet above the Florida Straits, the crew, which operates out of Coast Guard Air Station Miami in Opa-locka, keeps a watchful eye. While Prout and co-pilot Lt. Hannah Boyce fly the aircraft, two aviation electronics technicians monitor the radars and the two flight mechanics, doubling as spotters, watch the ocean from a window on each side of the plane. On Friday, a Miami Herald reporter and photographer were aboard.

The crew spotted the abandoned boat after opening the bay of the plane and dropping to just 300 feet above Anguilla Cay. Located just north of Cuba, the cay is near where the Coast Guard stopped an overcrowded wooden Haitian sailboat ferrying 123 passengers on March 4.

Groll suspects the boat may have been used in a smuggling operation, because “there is no reason for a vessel to be down there.”

Friday’s patrol turned out to be uneventful. But the number of migrants trying to reach South Florida has been on the rise since October, along with Coast Guard interdictions at sea.

The law enforcement agency has interdicted more than 3,500 Haitians at sea and nearly 1,400 Cubans since October.

“The Florida Straits, and Windward and Mona Passages, are dangerous. ... The Coast Guard and our partners have increased air and sea patrols, and if you are stopped, you should expect to be returned to your country of origin,” Groll said.

“We are urging families in the U.S. to not encourage these dangerous and unsafe voyages,” she added. “The risk for loss of life is great and there is always the uncertainty of not knowing if your loved one made it or not.”