Adm. Linda Fagan nominated to be commandant of the Coast Guard, would be first woman to lead a service branch 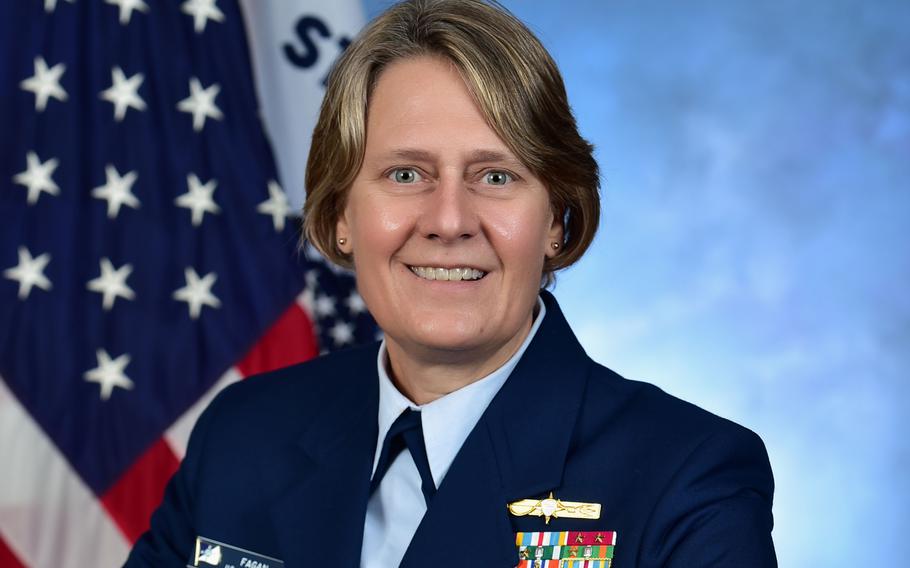 Adm. Linda L. Fagan has been nominated to serve as commandant of the Coast Guard, which would make her the first woman to lead a service branch of the armed forces, according to the White House.

The appointment made by President Joe Biden on Tuesday hinges on confirmation by the Senate.

“Her leadership and integrity are second to none,” Biden said in a statement. “If confirmed, Adm. Fagan will be the first woman in history to serve as commandant and the first female service chief.”

Fagan has served as the vice commandant since June and would replace Adm. Karl Schultz as the service’s top officer. She also was the first woman to take that job and the first to reach four stars in the Coast Guard. Schultz will retire following a command-change ceremony during the summer, the service said

“Admiral Fagan is a tremendous leader, trailblazer, and respected public servant who will lead the Coast Guard across its critical missions with honor,” said Homeland Security Secretary Alejandro Mayorkas, the department that oversees the Coast Guard.

A 1985 Coast Guard Academy graduate, her tenure in the Coast Guard has earned her the service’s first-ever Gold Ancient Trident, as the officer with the longest service record in the marine safety field.

Fagan has served on all seven continents, according to her Coast Guard biography. Her command experience includes leading the Pacific Area, Coast Guard Defense Force West and First Coast Guard District. She has more than 15 years as a marine inspector and conducted sea duty aboard the USCGC Polar Star, the service’s 399-foot heavy polar icebreaker.

“Within the Coast Guard and across the Department of Homeland Security, Admiral Fagan is admired as a role model of the utmost integrity, and her historic nomination is sure to inspire the next generation of women who are considering careers in military service,” Mayorkas said.

“Upon confirmation, she will become the first woman and mother to lead any branch of the armed forces. This nomination proves the value of enacting laws that provide family leave, child care, and health care access to support talented women in the Coast Guard who have dual roles as service members and parents. Adm. Fagan’s nomination will inspire generations of American women to strive to serve at the highest level in the armed forces,” Cantwell said.

To replace Fagan as vice commandant, she selected and Biden nominated Vice Adm. Steven D. Poulin, the service said. Poulin now serves as the commander of the Coast Guard Atlantic Area and is responsible for all Coast Guard missions from the Rocky Mountains to the Arabian Gulf.

Pending confirmation, Poulin is expected to relieve Fagan as vice commandant during a change-of-watch ceremony planned for May 24. A ceremony for Fagan to replace Schultz, who took command in June 2018, is scheduled for June 1. Both ceremonies will occur in Washington, D.C., according to the Coast Guard.

The Coast Guard is the largest component of the Department of Homeland Security with about 88,000 active duty, Reserve, civilian and volunteer auxiliarists.