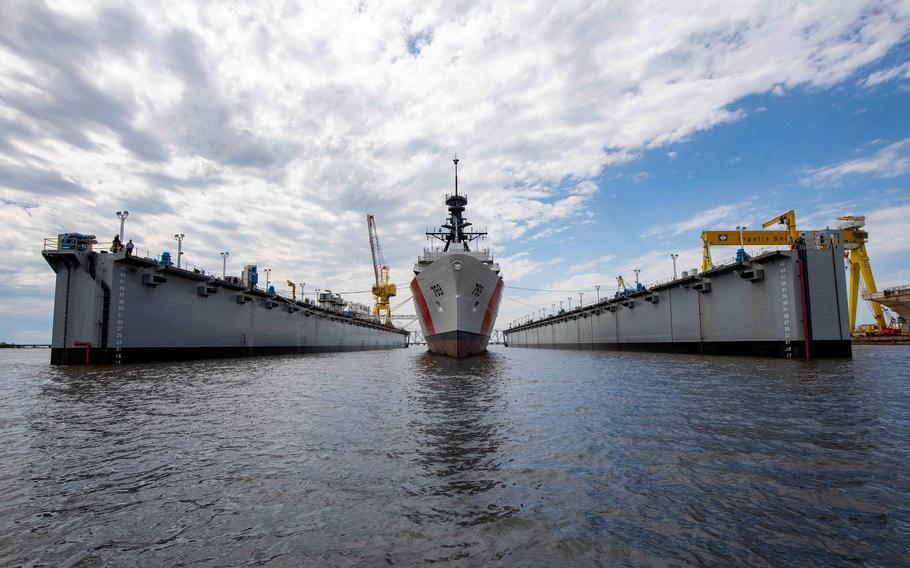 The National Security Cutter Calhoun (WMSL 759) is scheduled to be christened in June 2022 and delivered to the Coast Guard in early 2023. (Luis Solis/Huntington Ingalls Industries)

Aided by tugboats, Calhoun eased off the floating drydock Saturday, having first arrived at drydock by way of Ingalls’ rail system. The dock moved away from the pier and then ballasted to float the ship.

“The national security cutters are critically important to the safety and security of our country,” said Ingalls president Kari Wilkinson. “I am very proud of our NSC team who continues to build efficiencies into a mature program line to deliver the Coast Guard’s most advanced cutters.

“Our shipbuilders are proud and honored to build these magnificent ships, and we know that this ship named after the first Master Chief Petty of the Coast Guard, Charles L. Calhoun, has special meaning for the U.S. Coast Guard.”

Ingalls is the nation’s sole builder of Legend-class cutters for the Coast Guard. The shipyard has delivered nine NSCs, with two more under construction. In November 2020, NSC Stone was delivered to the Coast Guard and, within two weeks of sailing away from its berth at the Pascagoula shipyard, conducted an unprecedented 68-day patrol which resulted in a drug bust and enforcement against unreported and unregulated fishing off the coast of South America.

Calhoun is scheduled to be christened in June 2022 and delivered to the Coast Guard in early 2023.