What does $1 billion of cocaine and marijuana look like? The Coast Guard shows you (Tribune News Service) — The Coast Guard and other federal officials showed off more than a billion dollars worth of cocaine and marijuana Thursday that was confiscated from smugglers during several recent operations in the Pacific Ocean and more nearby in the Caribbean Sea.

The agency seized 54,500 pounds of cocaine and 15,800 pounds of marijuana, officials said Thursday at a briefing at Port Everglades in Fort Lauderdale, Fla. The total street value is estimated to be $1.06 billion, the Coast Guard said.

A haul that large means “a lot of sad walks to doors that will never have to occur,” said South Florida Democrat Rep. Debbie Wasserman Schultz, referring to overdose deaths that might be prevented with the drugs off the street.

The congresswoman made the remarks at the media briefing and was joined by other officials in front of the U.S. Coast Guard Cutter James, which was docked at Port Everglades.

It wasn’t the Coast Guard’s largest seizure, but it was for the James, a “national security cutter,” which is the largest and most technologically advanced type of ship the service deploys. 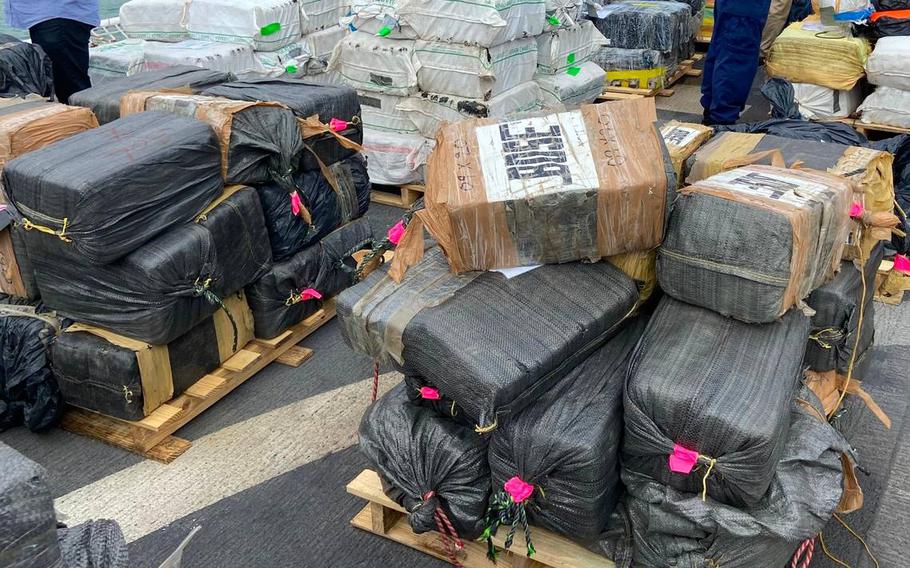 The seizure also comes on the heels of the U.S. Centers for Disease Control and Prevention reporting that fatal drug overdoses in the country topped more than 100,000 annually from April 2020 to April 2021 — up almost 30 percent from the previous 12-month time frame. The number reflects an increase in cocaine deaths as well.

“Our country is losing an American every five minutes around the clock,” Rahul Gupta, director of the White House’s Office of National Drug Control Policy, said at the news conference.

The drugs brought in by the James were the result of operations off the Eastern Pacific and Caribbean involving four other cutters, the U.S. Navy and the Royal Netherlands Navy, said Adm. Karl Schultz, commandant of the Coast Guard.

Officials have not commented on how many people were arrested in connection with the drugs, but about 30 people have been indicted in U.S. Southern District of Florida Court since Wednesday on charges related to distributing or conspiracy to distribute drugs on a vessel “subject to the jurisdiction of the United States.” That is the typical charge or charges pressed against people caught smuggling drugs by boat by the Coast Guard.

Capt. Todd Vance, commander of the James, explained Thursday that a typical interdiction first involves a Coast Guard helicopter spotting a “go-fast” or speedboat in the water. A cutter then launches a smaller patrol boat crewed by a team that will board the speedboat.

Vance said that it’s not just the drugs that are collected as evidence. He said things like “matchbook covers, pieces of paper and satellite phones” are also seized that help other branches of the government, including the Department of Justice, put together cases targeting the higher echelon of the transnational organizations trafficking the drugs.

Often, as happened at least once during the James’ most recent deployment, the speedboats don’t stop right away after seeing they’re being pursued. In those instances, the Coast Guard will fire warning shots in the go-fasts’ direction, Vance said.

“If the vessels don’t compel and comply when we ask them to stop, there are some steps that we take to allow them the opportunity to abide by our task and direction,” Vance said. “If that does not happen, we employ warning shots. A lot of times the targets decide to comply at that point, knowing that we have a full continuum of options after that.”