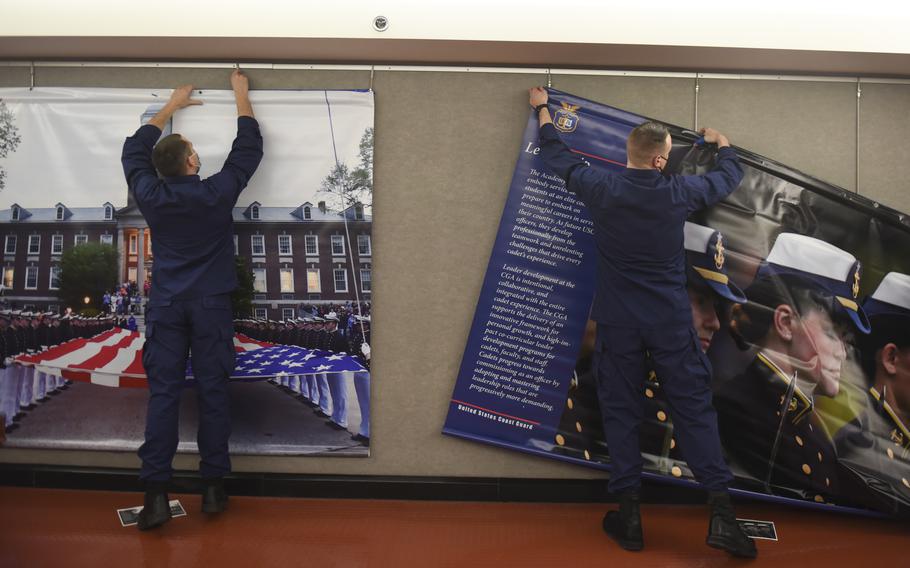 HARTFORD, Conn. (Tribune News Service) — A new temporary exhibit at the Connecticut state Capitol honors the United States Coast Guard and its rich history in Connecticut and serves as a preview of what’s to come with the Coast Guard Museum planned for New London.

The exhibit features panels on life at the Coast Guard Academy, the history of the Coast Guard, and the wide-ranging roles of service members. They line the hallway connecting the atrium of the Legislative Office Building to the Capitol building, and the exhibit will be up until Feb. 24.

Coast Guard officials and cadets gathered for a ceremony Thursday afternoon with local, state and federal politicians, with a brass quintet from the Coast Guard Band playing.

“We do not do a great job of telling our story,” academy Superintendent Rear Adm. William Kelly said. He added, “We’re delighted to share with you the Coast Guard story, here at the Capitol for the next few weeks.”

Kelly said the “engine” behind this exhibit was Rep. Anthony Nolan, D- New London. Nolan told The Day the idea dates to August, when he organized an extracurricular activity for New London youth to talk about the services.

“Three youth came back with Coast Guard, and they had very little information,” Nolan said. When he asked why, they told him, “We only know the Coast Guard for the academy and academics, and people can’t get in there because it’s too hard.”

Nolan said at a football game at the Coast Guard Academy, he got to talking to Cmdr. Krystyn Pecora, the academy’s external affairs officer. Pecora said Nolan had the idea of putting pictures up in this corridor, and she worked with Coast Guard historians in Washington, D.C., the National Coast Guard Museum Association and people from Sector Long Island Sound.

“We didn’t think it was going to be this big,” Nolan said Thursday.

Some historical artifacts were on display Thursday only. Lauren Laughlin, curator at the small, existing Coast Guard Museum on the academy’s campus, described the objects: Alex Haley’s hat, a bell from the USS Sea Cloud, and the Medal of Honor awarded to Douglas Munro.

Haley, the author of “Roots,” served in the Coast Guard, and Laughlin said he earned extra pocket money writing love letters for others to send to women back home, and then wrote news for the ship. The family that owned General Foods leased the USS Sea Cloud to the Navy for a dollar a year in World War II, when the Coast Guard fell under the Navy. And Munro sacrificed his life to save 500 Marines in the Battle of Guadalcanal in 1942.

“We’re really getting a preview of what’s going to be in the national museum,” said Drew Forster, spokesperson for the museum association.

Forster said the association has $81 million of the $150 million needed to build the museum — $30 million from the federal government for the Coast Guard to develop exhibits, $20 million bonded from the state to construct a pedestrian bridge, and $31 million in private fundraising.

U.S. Rep. Joe Courtney, D- 2nd District, noted that more federal funding could spur more private donations. He said the House didn’t have a mark for museum funding in its appropriations bill, which was part of a meeting he had Wednesday with Coast Guard Commandant Karl Schultz and Rep. Rosa DeLauro, D- Conn., who is chair of the House Appropriations Committee.

Speaking at the ceremony Thursday, Courtney noted that Schultz and the two commandants before him are all from Connecticut — East Hartford, Branford and Norwich.

He said of the exhibit, “This is not just a walk down memory lane; this is talking about the integral role the Coast Guard plays in evolving missions,” citing how there are Coast Guard ships “in some of the most contested waters overseas.”