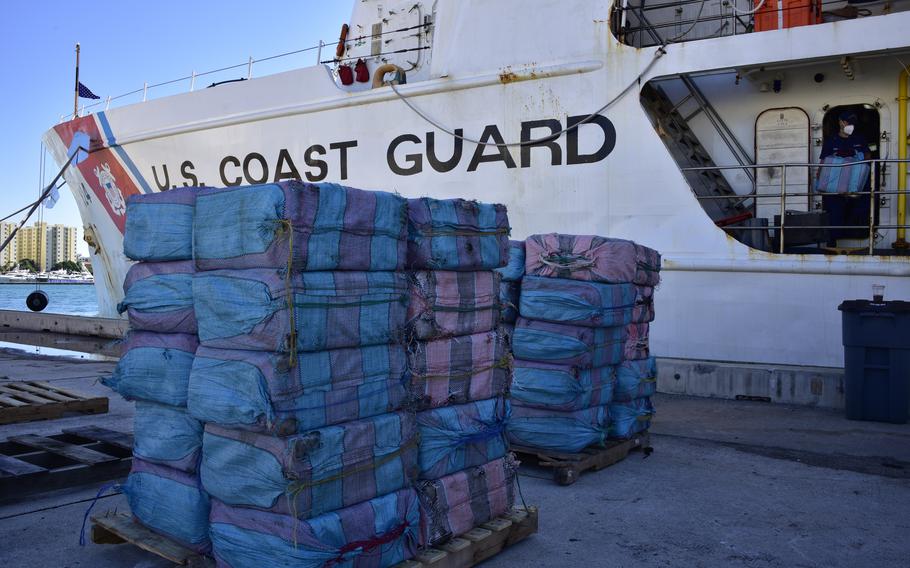 Bales of contraband are stacked in front of the Coast Guard Cutter Dauntless (WMEC-624) at Base Miami Beach, Dec. 7, 2021. The contraband was part of more than $148 million of illegal narcotics offloaded by the Dauntless crew. (Brian Zimmerman/U.S. Coast Guard)

(Tribune News Service) — More than $148 million of illegal narcotics were offloaded at the Coast Guard’s Miami Beach station on Tuesday.

The drop off, by Coast Guard Cutter Dauntless’ crew, included drugs seized from three separate interdictions in the Caribbean Sea in the past two weeks.

According to the Coast Guard, nine suspected drug smugglers from the Dominican Republic and Colombia were captured and will be prosecuted by U.S. Attorney’s Offices for the District of Puerto Rico, Southern District of Florida and the Eastern District of Virginia.

Hansel Pintos, Seventh District spokesperson, said the international partnerships help “counter threats in the maritime domain, protect each of our countries from transnational organized crime, and work to stabilize and promote good governance in the region.”

According to the Coast Guard, a suspect vessel is initially detected and monitored by allied, military or law enforcement personnel coordinated by Joint Interagency Task Force-South based in Key West.

The law enforcement phase of operations in the Caribbean Sea is conducted under the authority of the Seventh Coast Guard District, its office headquartered in Miami.

Members of the U.S. Coast Guard perform the interdictions, including the actual boardings, of suspected drug boats.