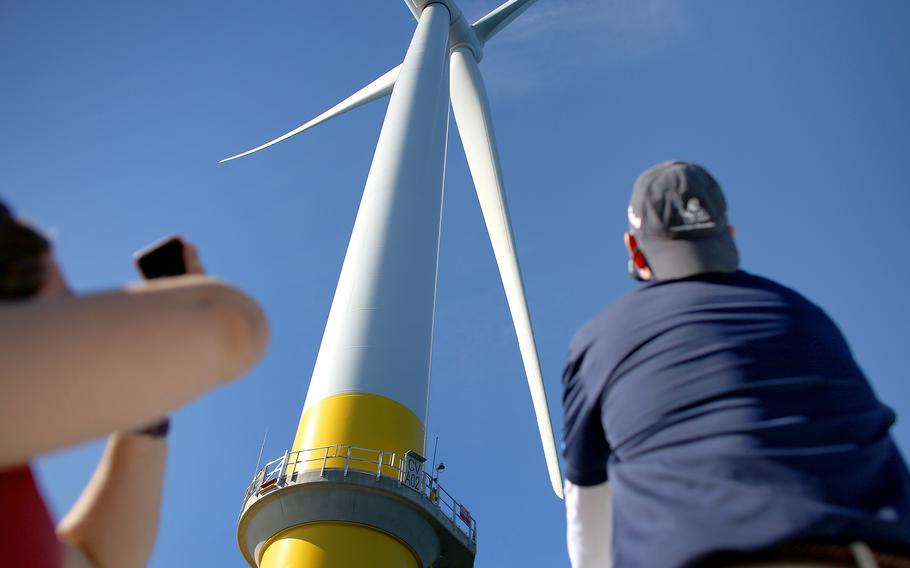 Dominion Energy’s first two turbines — part of a planned wind farm — are about 30 miles off the Virginia Beach coast. The Coast Guard already is planning how to conduct search and rescue operations around the massive structures. A turbine is seen Sept. 27, 2021. (Stephen M. Katz, The Virginian-Pilot/TNS)

(Tribune News Service) — Rear Adm. Laura Dickey has a lot on her mind.

For example, hundreds of wind turbines, each taller than two football fields, will soon make their homes in her jurisdiction. Then there’s an increasing number of commercial space flight operations from NASA’s facility on Wallops Island. Soon, more and more entities will use unmanned autonomous ships, complicating navigational safety efforts.

When you add those new concerns to the increasing number of fishing, recreational and shipping vessels that use waters under her watch, Dickey — who oversees Coast Guard missions from North Carolina to New Jersey — has plenty to do.

“How do we make sure that all these things are operating in harmony with one another?” Dickey asked attendees at a recent Virginia Maritime Association event.

Dominion Energy plans to construct a 180-turbine wind farm 27 miles off the coast of Virginia Beach by 2026. Avangrid Renewables also wants to construct a 2,500-megawatt installation 27 miles from Corolla, N.C.

Those aren’t the only wind projects planned in Dickey’s water. She said nine active projects and eight leases under consideration are in the mid-Atlantic region, including the two Hampton Roads wind farms.

The Coast Guard must ensure vessels can safely operate around the turbines, and that its own ships can conduct search and rescue operations safely. Along with the farms themselves, a host of construction, supply and support ships will be going back and forth to the installations.

“How do we handle that type of traffic?” Dickey asked.

Dickey said she’s already seen vessels at the two test wind turbines, which Dominion completed in October 2020. It’s a harbinger of the sector’s explosive potential, according to a new report on the Hampton Roads maritime industry from the TEconomy Partners research agency. The report says U.S. offshore is expected to grow from 30 megawatts to 23 gigawatts over the next decade. Turbine manufacturing also is expected to grow from a $2.6 billion industry in 2018 to $5.2 billion by 2024.

“There is just going to be some massive growth offshore,” Dickey said. “This is a really burgeoning area.”

The Coast Guard also will monitor the growth of commercial space flight in the mid-Atlantic, Dickey said. It provides security zones for Wallops Island when NASA launches its rockets. A company called Rocket Lab will begin launching small satellites from the facility, with larger satellites planned in the future.

Dickey said she needs to make sure how many launches her branch can accommodate, and whether larger launches will interfere with U.S. Navy operations or other uses of the ocean.

Lastly, Dickey said she expects to see more and more unmanned vessels at sea from users like the Navy, the National Oceanic and Atmospheric Administration, universities and research organizations and commercial industry. Beyond knowing who exactly is piloting a particular vessel, Dickey said the Coast Guard is worried about hacking attempts and national security risks from adversary countries controlling the vessels.