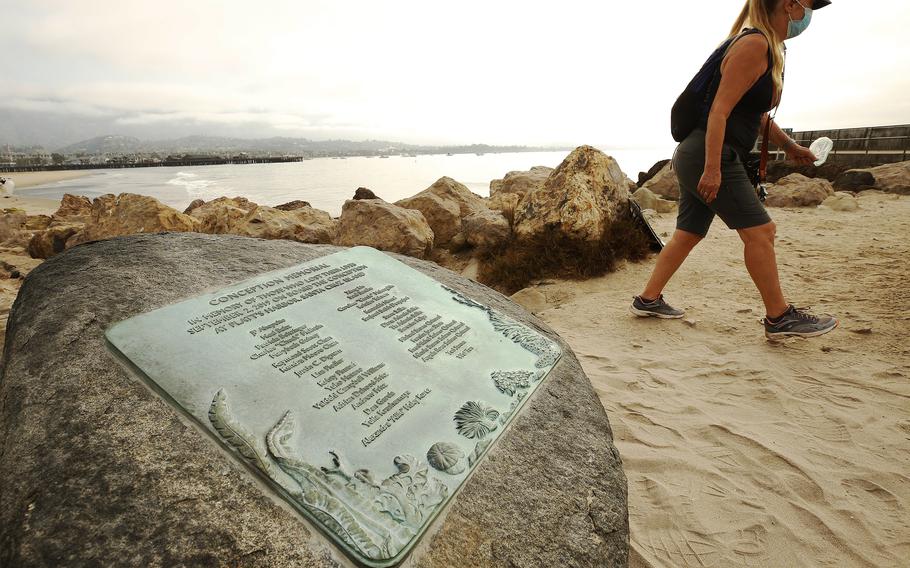 On the first anniversary of the 2019 Conception boat fire, Susan Tibbles walks past a memorial for the 34 people who died, in Santa Barbara, Calif. (Al Seib, The Los Angeles Times/TNS)

LOS ANGELES (Tribune News Service)— Family members of the 34 people who died in the Conception dive boat fire off the Channel Islands in 2019 are suing the U.S. Coast Guard, alleging it failed to enforce regulations and allowed the vessel to operate with substandard electrical and safety systems that led to the deaths.

The suit was filed Wednesday on the eve of the second anniversary of the fire, the worst maritime disaster in modern California history.

It also comes as the captain of the vessel, Jerry Boylan, is facing 34 counts of seaman's manslaughter for his failure to have a required roving watch person who could have detected the fire sooner, possibly in time to save the 33 passengers and one crew member who were sleeping below deck during the Labor Day weekend dive excursion.

The National Transportation Safety Board has previously cited the failure by Boylan and the Conception's owner, Truth Aquatics, to comply with Coast Guard requirements that it run a roving watch person whenever passengers were sleeping below deck, as well as other safety procedures. Boylan has pleaded not guilty and is awaiting trial.

But the wrongful death lawsuit filed Wednesday in federal court in Los Angeles portrays the Coast Guard as the enabler that helped send the 34 people to their deaths in Platts Harbor off Santa Cruz Island with failed oversight.

Less than a year before the fire, the Coast Guard certified the boat to carry 40 passengers overnight "even though her electrical wiring systems, her fire detection and suppression systems and passenger accommodation escape hatch were in open and obvious violation of" federal regulations, according to the lawsuit.

In the aftermath of the fire, the Coast Guard inspected the Conception's sister vessel, the Vision, and "discovered numerous glaring deficiencies" in its wiring and electrical systems, fire detection and suppression systems and its escape hatch, according to the suit. The Vision is similar in build and design to the Conception and was also owned by Truth Aquatics.

"Had the Coast Guard properly inspected the Conception it never would have been certified, never set sail, and these 34 victims would not have lost their lives," said Jeffrey P. Goodman, who represents several of the families and speaks for the legal team.

"Sadly, certifying noncompliant vessels is commonplace at the Coast Guard," he added. "The time has come for the Coast Guard to be held accountable for its failures to protect those victims and prevent future maritime disasters on America's waterways."

Coast Guard officials could not immediately be reached for comment on the lawsuit.

Goodman said that although most people know of the men and women who risk their lives in critical safety missions, the Coast Guard also is a regulatory agency responsible for properly certified vessels.

"The Coast Guard has failed in that mission for decades by not enforcing certification requirements and routinely allowing noncompliant and unsafe vessels on the water," he said.

The lawsuit notes that an examination of the Vision revealed homemade repairs done with the kind of wiring available at Home Depot and not of the quality used in maritime vessels. The boat's electrical system was so stressed that it could not run when the galley stove was on.

The suit notes that in 2013, the Coast Guard started publishing so-called Navigation and Vessel Inspection Circulars and safety alerts about the danger of circuit overloads and shipboard fires caused by power strips and rechargeable devices aboard vessels.

The suit alleges the Coast Guard knew or should have known that Truth Aquatics added "undocumented and ill-designed electrical outlets throughout the vessel for the purpose of battery charging" and encouraged passengers and crew to charge video cameras, smartphones, underwater scooter power packs and other lithium-ion battery equipment.

Eleven months before the deadly Conception fire, those on a dive trip on the Vision saw a battery being charged spark flames, which was then smothered with a dry chemical fire extinguisher and tossed in a bucket.

The Conception consisted of three decks: the pilot house and crew quarters on top; a middle deck, where the fire ignited; and sleeping quarters in the belly of the vessel. The NTSB determined the fire began in the back of the middle deck salon, where lithium-ion batteries were being charged. But the agency could not say whether it was the source that ignited the blaze.

Those sleeping below deck were trapped beneath the fire. There were signs that some were awake with their shoes on before they were killed by smoke inhalation. The NTSB faulted Truth Aquatics for running a vessel with little or no oversight, which Truth Aquatics' attorneys strongly deny.

The families are already suing Truth Aquatics for wrongful death and negligence in the operation of the Conception.