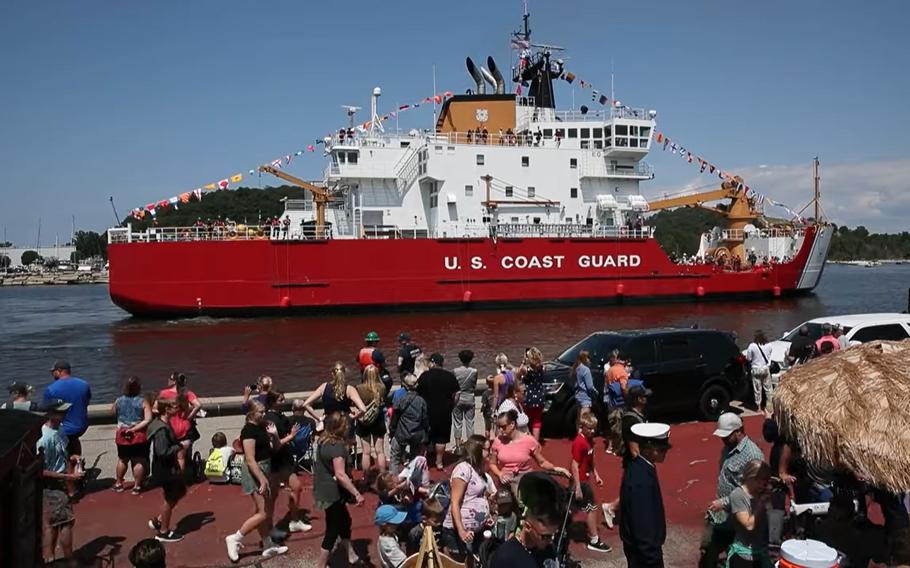 The Mackinaw was one of four Coast Guard cutters to officially port in Grand Haven on Monday as part of this year’s festival. (Screen capture from YouTube)

Nearly perfect conditions gave the 240-foot icebreaker an emphatic entrance, as the recognizable red hull nestled into the mouth of the Grand River.

A total of 33 people came aboard the heaviest icebreaker on the Great Lakes, touring a ship that has served the Great Lakes since replacing the original Mackinaw in 2006.

The Mackinaw was one of four Coast Guard cutters to officially port in Grand Haven on Monday as part of this year’s festival. The others are the cutters Buckthorn, Morro Bay and Katmai Bay.

But the Mackinaw couldn’t suit the festival better as its under command of Cmdr. Kristen Serumgard, highlighting this year’s festival theme of “Women in the Coast Guard: Strength Within.”

For Serumgard, it’s been a long time coming after two mechanical issues with the Mackinaw in previous attempts to make it to the Grand Haven festival.

“This is ecstatic,” she said. “I’m really excited to cap off the most senior command on the Great Lakes. Just super excited to be able to enjoy and be a part of this celebration of the Coast Guard.”

Serumgard, originally from Great Falls, Virginia, joined the Coast Guard when she was just 17 years old. Twenty-five years later, she’s part of leading just 15 percent of women in the service, and she is due for a promotion to captain next summer.

“It’s a pretty storied position to be in,” she said. “I know there will be a few previous (commanding officers) of the Mackinaw at the event, but it’s such a small group and a rarified air to be in.”

In fact, Serumgard says they nickname themselves by where they are located. In her case, Serumgard is Mackinaw 8, along with Cmdr. Scott Smith as Mackinaw 4.

Others, like Chief Daniel Parker, have patiently waited to come aboard the Mackinaw. Previously stationed in Portsmouth, Va., Parker had Mackinaw atop his list.

“I’ve never been to Grand Haven before so I’m really excited about this week,” he said. “I’ve been trying to get on this boat for 10 years now, so it’s unique. And as an engineer, it’s above and beyond a lot of what the Coast Guard has.”

Tourists who received their chance to come aboard the Mackinaw had to wait an extra year due to COVID-19, so for couples such as Karen and Mike Lowe, it’s been extra special.

“We’ve been on the Mackinaw and been out to see the boats, but seeing it this way is incredible,” Mike said.

Rick and Kay Waters have lived in Grand Haven for more than 26 years, but couldn’t have been more impressed with the “Queen of the Great Lakes.”

“The crew did a great job and this is a wonderful festival to have back in Grand Haven again,” Rick said. “This is a time to celebrate the heritage of the Coast Guard, city and state.”

The Mackinaw has the ability to smash ice from either the bow or the stern, with the ability to break through 24-36 inches of ice. The steel hull chops the ice initially, as the weight of the ship finishes the job.

“We typically operate in the Straits of Mackinac, St. Marys River and St. Clair River because those can get pretty jammed up,” Coast Guard Public Affairs Officer Patrick Buell said.

According to Buell, the Mackinaw is the largest, most capable American asset on the Great Lakes.

Per COVID-19 guidelines, there will be no civilian entry on board any ships in 2021. All tours will be walking tours on land next to the ships. Walking tour times are subject to change at the discretion of the U.S. Coast Guard and will be given by guides at Escanaba Park.