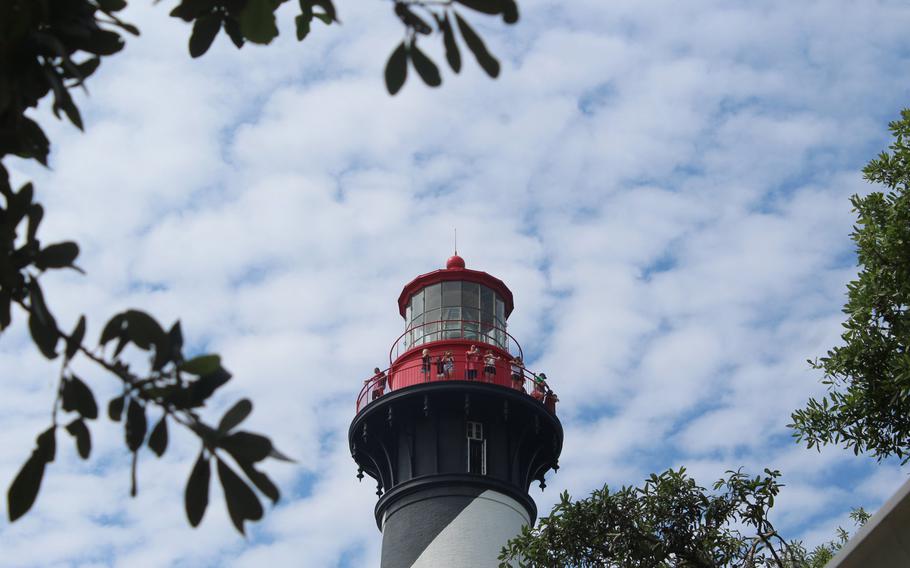 A photo of the St. Augustine Lighthouse & Maritime Museum on June 7, 2019. (Facebook)

ST. AUGUSTINE, Fla. (Tribune News Service) — St. Augustine may have seemed a long way from the fighting of World War II, but a St. Augustine Lighthouse and Maritime Museum exhibit shows how close the war was.

To disrupt commerce and the allied war effort, the navy of Nazi Germany sent submarines to patrol the East Coast of the United States and sink shipping.

To defend against the Nazi U-boats, the U.S. Coast Guard set up observation stations along the East Coast where Coast Guardsmen would patrol, observe and report any sightings of enemy vessels. One of the highest of these observation points was 165 feet above the ground atop of the St. Augustine Lighthouse.

Being in 1942, after the Japanese attack on Perl Harbor when the United States entered the war, Coast Guardsmen stood watch from the observation deck of the lighthouse 24 hours a day, reporting by radio any shipping and submarine sightings to a navy office in the Government House in St. Augustine.

In 2020, the Lighthouse Museum restored barracks near the lighthouse’s base where the observers lived to house an exhibit showcasing their contribution to the war effort during the first year of the conflict.

“People now don’t realize how close to our shores the war was,” said Kathy Fleming, executive director of the St. Augustine Lighthouse & Maritime Museum. “Nazi subs hunted shipping in the water right off the beach.”

A dramatic example of this is featured in the museum with an exhibit of the sinking of the oil tanker SS Gulfamerica off the coast of Jacksonville on April 10, 1942. Silhouetted by the lights of Jacksonville Beach, the ship was torpedoed by German submarine U-123, causing the deaths of 19 men.

Displayed in the exhibit is a video by marine archaeologists from the lighthouse’s research program whose divers documented the wreckage of the Gulfamerica.

The German U-Boat operations along the East Coast, informally called Operation Drumbeat, lasted until the late summer of 1942 and resulted in the sinking of more than 600 ships and the loss of thousands of lives.

Before dawn on June 16, 1942, a German submarine landed four Nazi spies on Ponte Vedra Beach who planned sabotage military bases. The Germans, along with four other spies that landed in New York, were captured.

“The World War II generation was the greatest generation, but they’re also the silent generation. They didn’t say much, but they did so much,” Fleming said. “That is part of what is special about this exhibit, to remind us of their service.”

The exhibit also tells of how the Ponce de Leon Hotel, now Flagler College, in the city was used as a training facility for Coast Guard recruits during the war. At any one time, more than 2,500 young men and women were trained and housed there. Photos on display show Coast Guardsmen marching from the Castillo de San Marcos and through town.

In addition to what is on display, the museum has an archive of thousands of items from the war era that includes uniforms, letters, logs books and photographs.

A big part of the project was to collect oral histories from the men and women who served here. Museum staff has recorded hundreds of hours of interviews that are part of their collection.

“There is an account from a guy that was here in St. Augustine who was bridge patrol on the old Vilano Bridge during the war who watched a Nazi sub come into the port of St. Augustine through the inlet and turn around and head out again.” said Jay Smith, a historian and museum staffer who worked on the project.

And the project is continuing.

“The current exhibit documents the war effort through 1942, but we are still collecting oral histories and artifacts and are working to included the rest of the conflict,” Smith said.

“This is part of our history here because the lighthouse was part of the coastal defense during the war as well as coastal navigation, “Fleming said. “In terms of a story, it is important to be educational because very few people know the story of the U-Boats being this close to us. If we can tell the story to the next generation or the generation after that, that is what we are here for.”

St. Augustine Lighthouse and Maritime Museum is a nonprofit organization the preserves the 165-foot lighthouse that was completed in 1871 as well as documenting and preserving the maritime history of the First Coast.