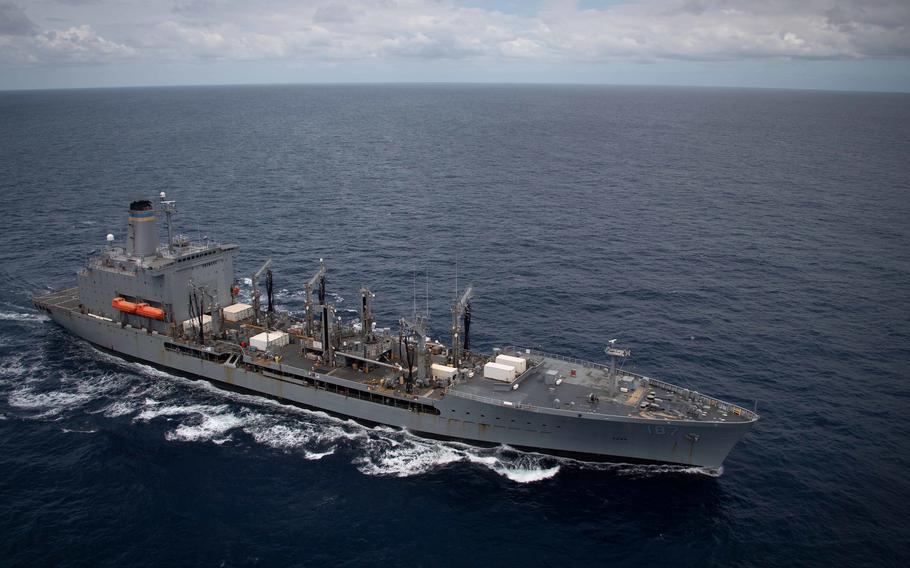 U.S. Navy fleet replenishment ship USNS Henry J. Kaiser steams in a multinational formation during a photo exercise off the coast of Hawaii during the Rim of the Pacific exercise on Aug. 21, 2020. (Jenna Dobson/U.S. Navy)

SAN DIEGO, Calif. (Tribune News Service) — The Coast Guard said it is investigating reports made last Saturday of two oily sheens off the coast of Point Loma and San Clemente Island, but has yet to release any details about a possible source of the pollution.

Coast Guard Sector San Diego did not acknowledge the possible spill off the island about 70 miles from shore until Wednesday evening. A whale-watching captain called the agency Saturday to report a “giant” oily sheen stretching for roughly 50 miles, and he later posted a video to social media of dolphins swimming through the pollution.

“The Coast Guard takes all reports of marine environmental pollution seriously,” said Lt. Ryan Szabo, incident management division chief, in a press statement release Wednesday after 7 p.m. “We thank all of the responsible citizens who reported these environmental concerns in a timely manner.”

The Coast Guard confirmed over the weekend a roughly 100-gallon spill of what was likely diesel fuel about 11 miles northwest of Point Loma. Authorities said that a cleanup effort wasn’t necessary because the spill would dissipate within a day.

“Navy personnel reported no signs of sheening in or around San Clemente Island,” officials said in Wednesday’s press statement.

The USNS Henry J Kaiser, an aging oiler used for underway replenishment training exercises, was operating in the area of the sheen last weekend, according to marinetraffic.com.

Sal Mercogliano, a maritime historian at Campbell University in North Carolina, said spills can occur during replenishment training, where an oiler like the Kaiser transfers fuel and other supplies to nearby military vessels.

“You pump under a high amount of pressure, a large volume of fuel goes across, and it’s not unusual for those large-diameter hoses to have ruptures at times,” he said. “ Henry Kaiser is also the oldest of the class. She’s close to 40 years old now, so she’s at the edge.”

Spills can also result from a cracked hull, such as with a Navy cruiser out of Norfolk, Virginia, that recently leaked fuel while attempting to cross the Atlantic Ocean.

“That’s the other way you get fuel spills like that; all of a sudden you start leaking from a tank,” Mercogliano said. “That’s an issue with older Navy vessels.”

Navy officials have repeatedly denied any knowledge of the potential fuel spill off San Clemente Island.