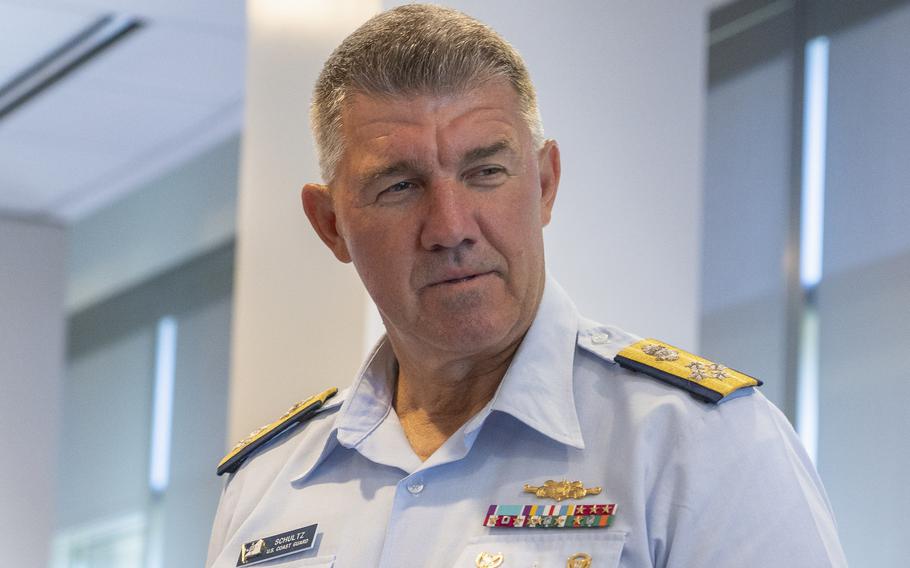 WASHINGTON — The commandant of the Coast Guard is set to testify Wednesday for the first time about how the service is addressing harassment, bullying and retaliation after a series of damning congressional and inspector general reports.

Adm. Karl Schultz is likely to face questions from lawmakers on the House Homeland Security Committee about the reports, dating back to 2019, as well as the findings of an independent study that year on female-retention challenges.

The hearing, titled “Building the Coast Guard America Needs: Achieving Diversity, Equity and Accountability Within the Service,” comes after Schultz faced scrutiny from some Democratic House lawmakers for declining to testify twice within eight months.

A brewing debate in Congress about military justice reform also stands as a backdrop for Schultz’s first appearance on Capitol Hill. A growing number of lawmakers are rallying behind a movement to take the decision away from the chain of command on whether to prosecute sexual assault cases and other serious crimes.

While Department of Defense service chiefs have spoken out in public forums and at congressional hearings on the scourge of sexual assault and harassment in the military and the lack of recourse for survivors, the Coast Guard’s leadership has largely remained out of the spotlight.

But an 18-month congressional probe into the handling of harassment and retaliation complaints at the Coast Guard Academy drew attention to one of the military’s smallest branches, which falls under the Department of Homeland Security.

In December 2019, the chairman of a House Oversight subpanel Rep. Jamie Raskin said at a joint hearing with the Homeland Security Committee to discuss the report that despite “repeated requests” for Schultz’s testimony, he “refused to attend.”

Vice Adm. Michael McAllister, deputy commandant for mission support, appeared at the high-profile hearing instead. McAllister told lawmakers then that the commandant asked him to testify on his behalf as the official who oversees the Connecticut-based Academy and leads diversity and inclusion initiatives and training programs.

At the time, McAllister said that he did not have data to suggest bullying and harassment were widespread issues within the Coast Guard.

Schultz also came under fire again when the heads of the House Oversight and Homeland Security Committee said the commandant declined to testify at a remote hearing set for July 16, 2020, claiming that a White House directive banned virtual testimony from administration witnesses.

A Homeland Security Inspector General report in early June was the focus of the planned July hearing, which found the Coast Guard Academy was aware of 16 racist harassment cases between 2013 and 2018, of which 11 were not investigated thoroughly. The IG also found racist harassment was “underreported” due to concerns over retribution for reporting allegations.

Lt. Cmdr. Kimberly Young-McLear, the whistleblower whose case was a key part of the 2019 congressional probe, said she has not seen a drastic change in the service’s culture since she testified that year on the bullying, harassment, discrimination and retaliation that she endured over five years.

A Black, lesbian officer who has climbed the ranks during nearly 20 years of service, Young-McLear made complaints that several of her superiors harassed her while teaching at the Academy based on her gender, race and sexual orientation.

The investigation found that these complaints were not investigated thoroughly and that she was retaliated against for speaking out about the years of abuse, in violation of the Military Whistleblower Protection Act.

“My case has been very visible in public, and to this day, even 18 months after I testified, there still continues to be zero justice or accountability with my case. … We don’t really have a strong culture where holding people accountable is a standard,” Young-McLear said.

All the senior Coast Guard officials who were found to be complicit in Young-McLear’s case have all gotten promotions or competitive job assignments, she said.

Young-McLear – now a detailee at DHS’ cybersecurity agency -- said she believes the high-profile incidents that “revealed the cruelty and pervasiveness of how allegations are systematically swept under the rug” are not isolated. They continue to erode “our preparedness and agility to address national security threats and mission readiness,” she said.

More than two dozen active-duty and former members of the Coast Guard contacted Stars and Stripes within three days when asked on social media to share stories about harassment, bullying, retaliation and toxic command climates within the service.

Many who reported incidents to their chain of command said they were told the abusive behavior was their fault, or that they were not telling the truth, which made some feel like they had to suffer in silence.

Poor leadership, gender bias, discrimination, unfair weight standards and sexual assault and harassment were among some of the top reasons why women left, according to the study, which included concerns from focus groups made up of active-duty women and men.

Some participants of the study said bad leaders are retained and sometimes promoted, and an “old boys’ club” culture made them feel excluded or that they had to tolerate inappropriate comments.

The service members also said that “units with only one or two women assigned and units in remote, isolated environments also tended to experience sexual harassment or assault more often than other units,” according to the study.

Estrella Marin, a Coast Guard veteran who served from 2005 to 2017, said the service’s handling of multiple Equal Employment Opportunity cases she filed made her decide to leave the military.

Marin, 39, left when she was an E-4, serving as a marine science technician in Guam. She said she had experienced reprisal after filing a complaint, as well as a sexual assault and harassment at some of her earlier units.

The Hawaii resident said that she wants Schultz at Wednesday’s hearing to share his understanding of the weaknesses in the Coast Guard.

“It may not be affecting him personally, because he’s in this insular bubble, even within a very insular organization,” Marin said.

“Every time things get pushed under the rug, it doesn’t go away. It just comes back worse. So then you have to allocate more money, more resources to get it taken care of, or if you would have just done it right the first time, it would not be where it’s at,” she said.

Young-McLear believes the Coast Guard needs a culture that prioritizes accountability and justice to attract and retain a workforce that is diverse and equitable.

The lack of it “sends a crystal clear message to the perpetrators that are already in the ranks … that they can continue their behaviors, because there won’t be any consequences,” she said.

This forces talented service members out of the Coast Guard, leaving them to deal with the lasting effects of psychological harm, including PTSD and other mental health diagnoses, she said.