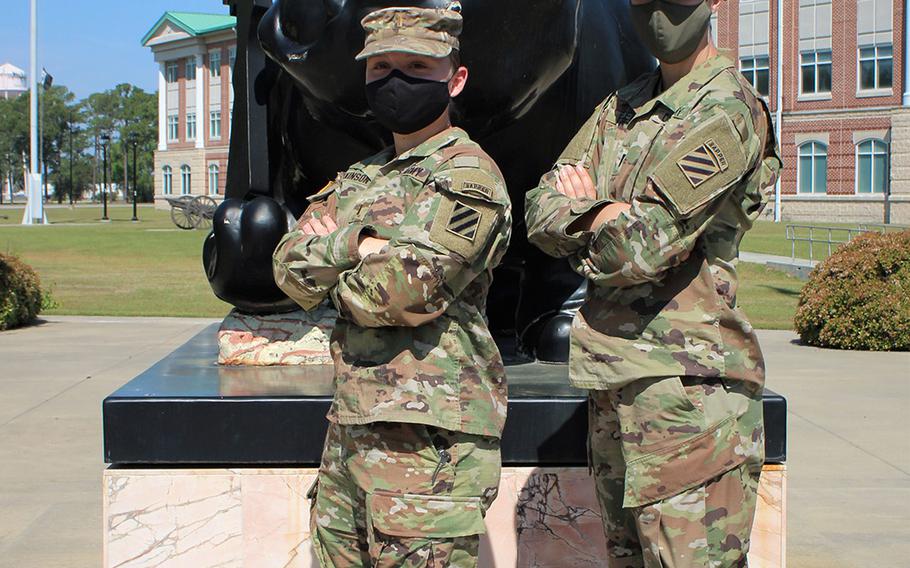 ATLANTA — A pair of Fort Stewart, Ga.-based engineering officers is set to become the first all-female team to compete for the title of the Army's best-skilled combat engineering duo next month in Missouri.

“It's an honor to compete and represent our unit, and even if we weren't the first all-female team just to go is a very, very good opportunity for us,” said Burden, who commissioned into the Army in 2017. “We’re really proud to be able to do that, [and] to show other Sappers that it is possible to go as an all-female team is exciting.”

The 2021 competition will mark the 14th iteration of the Best Sapper contest, which tests combat engineering teams in a variety of skills learned in the Army’s Sapper Leader Course for enlisted combat engineers and engineering officers. The 50-team competition sees contestants span more than 50 miles in 50 hours on limited sleep while carrying more than 80 pounds of gear and tests a variety of skills including demolition and land navigation, according to the Army.

It also will mark the first time competing in the event for Burden and Atkinson, who are both Sapper school graduates.

An all-female team from the 101st Airborne Division was set to become the history-making pair to compete in the Best Sapper Competition last year, before the coronavirus pandemic forced the Army to cancel the 2020 contest. Capt. Hilary Thomas and 1st Lt. Alyvia Orsini, who were with the 101st’s 21st Brigade Engineer Battalion, 3rd Combat Team would have competed last year, the Army had announced before scrapping the event.

Burden and Atkinson said Wednesday that they were inspired by the expectation of an all-female team last year.

“It was pretty cool that [Thomas and Orsini] were able to actually enroll,” said Atkinson, who commissioned as an officer last year after previously serving as an enlisted combat engineer with the North Carolina Army National Guard. “Being able to kind of carry that on and go on for it next month is going to be really exciting.”

The all-female team is one of the three Best Sapper teams entering the competition from Fort Stewart, including another with a female engineering officer. First Lt. Madison Jones will compete with 1st Lt. Andrew Wilhelm, both of the 92nd Engineer Battalion, 20th Engineer Brigade.

Burden expects the competition to be grueling. Competitors know generally the skills that they will be tested on, but they enter the contest unaware of precisely what the course will look like or what tasks they must complete.

Burden and Atkinson have spent the last three months training for the event, focused largely on long runs and ruck marches through Fort Stewart’s swampy tank trails that wind throughout the wooded training grounds on the coastal Georgia Army post. They intend to navigate 70 miles during morning training sessions, which they follow with afternoon training on their engineering skills.

They do think they have at least one advantage in training at Fort Stewart. They will compete in Missouri, which is cooler with less humidity than the climate in Georgia, where they have trained for months, Burden said.

“I'm not worried about becoming a heat casualty at all,” Atkinson said. “This is way hotter than anything we’re going to experience out there.”