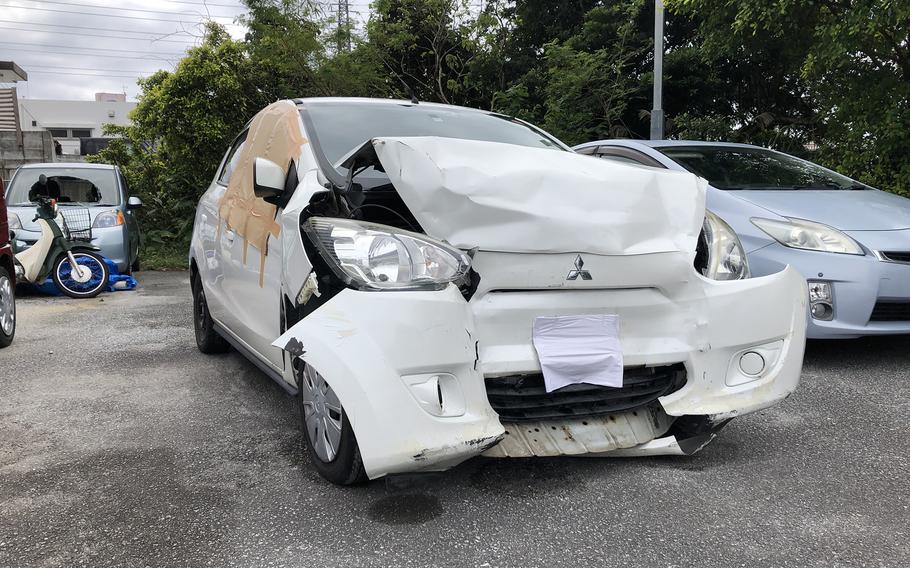 A Mitsubishi Mirage involved in a wrong-way crash in Uruma city sits at the Naha Police Station, Tuesday, Jan. 17, 2023. (Keishi Koja/Stars and Stripes)

On Thursday, police in Uruma city arrested a sailor assigned to White Beach Naval Facility for allegedly driving in the wrong lane and colliding head-on with another vehicle, a police spokesman told Stars and Stripes by phone Tuesday.

The sailor, age 20, and two local high school students, both 18, in the other vehicle were treated at local hospitals for minor injuries, the spokesman said. He would not identify the sailor because he was released to receive medical treatment.

A witness phoned police at 10:52 p.m. Thursday to report a white Mitsubishi Mirage driving in the wrong direction on the Kaichu Road bridge between Henza and Okinawa, the spokesman said. He said police arrived six minutes later to find the Mirage and another light automobile wrecked at the scene.

The male Japanese driver suffered a bruised knee; the female passenger’s back and armpit were bruised, the spokesman said.

He said the sailor’s blood alcohol content measured 0.09% on a breath test, or three times the 0.03% legal limit in Japan. The sailor was treated at U.S. Naval Hospital Okinawa on Camp Foster for unspecified injuries, the spokesman said.

Some government officials in Japan are required to speak to the media only on condition of anonymity.

The spokesman said Aden struck the motorcycle on a backroad in the Oyama district, where it had stopped for another vehicle. No injuries were reported.

The soldier was released Monday and his case was forwarded to prosecutors, the spokesman said.

The incident is under investigation, 10th Support Group spokesman Maj. Richard Barker told Stars and Stripes in an email Tuesday.

Aden and the unidentified sailor may be charged under Japan’s Road Traffic Act; the sailor could face an additional charge of injuring others while driving.