First woman leader of US Army Chorus: ‘I feel really privileged to be here’ 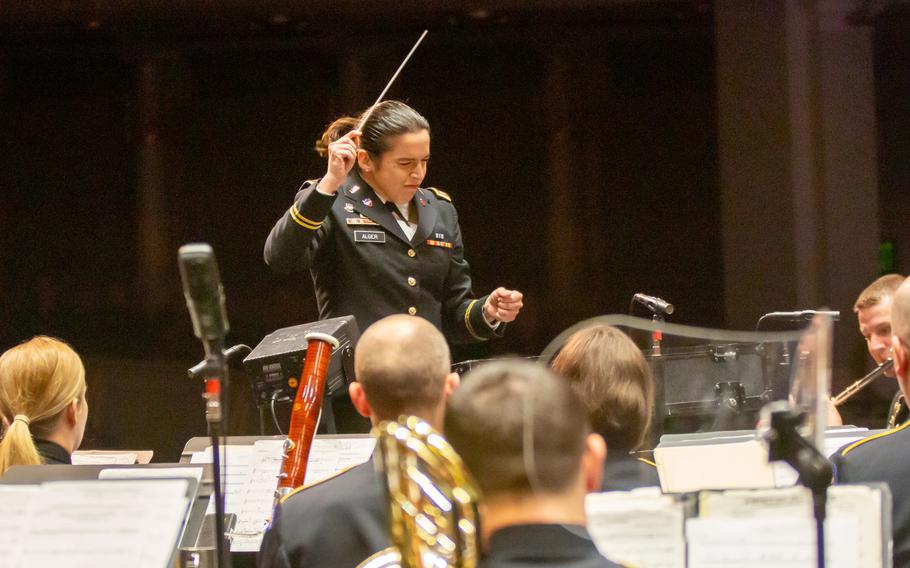 As Officer in Charge of the U.S. Army Chorus, Bonnie Alger is responsible for knowing the health and welfare of all the soldiers and their families within the group and assisting the unit’s supply team with their monthly inventories. (Facebook)

“I feel really privileged to be here,” Alger said. “I work with really wonderful people every day. The U.S. Army Chorus is comprised of a whole bunch of extremely talented, intelligent musicians who care about music-making at the highest level and care about their country.”

Alger said her primary responsibility with the U.S. Army Chorus is “to ensure the Chorus’ music readiness” to support senior government and military leadership.

Band officers also have a number of non-musical responsibilities, Alger said, that are often related to the operation and overall well-being of the unit. As Officer in Charge of the U.S. Army Chorus, she said she’s responsible for knowing the health and welfare of all the soldiers and their families within the group and assisting the unit’s supply team with their monthly inventories.

Regarding her new position, Alger said she’s coming into the army chorus at “a really great and really important time in its history.” She said the army chorus has existed for about 66 years and has gone through a variety of changes over the years in terms of the configurations of voices and the type of repertoire that they sing.

“I am often the one choosing repertoire, leading rehearsals and performances — which we call “missions” — and serving as the figurehead for the group,” Alger said.

Alger said the chorus was previously comprised solely of tenor and bass singers that sang classical, patriotic, show tunes, pop and opera selections, among other music. However, it has morphed into a soprano, alto, tenor and bass ensemble over the last few years.

“We’ve been holding auditions for sopranos and altos,” Alger said, “and once that transition is complete and once we have a fully balanced group with all four parts, we will continue the tradition of music that we’ve been singing.”

Alger plays the violin and sings mezzo soprano, though conducting has been her main focus for several years. She described conducting as a combination of all the things she likes about music and said it adds a teaching, coaching and leadership component.

A 2002 graduate of New Milford High School, Alger attended Lawrence University in Appleton, Wis., and graduated with a bachelor’s degree in music in 2006. She enrolled in graduate school at University of Northern Iowa in Cedar Falls, Iowa, where she earned a master’s degree of music in conducting, and then attended the University of Southern California in Los Angeles, Calif., where she earned a Master of Arts degree in teaching music.

Following her time in Los Angeles, Alger said she moved back to Iowa for a year where she directed a youth orchestra and a church choir, sang in regional choirs and played the violin in a few regional orchestras. She received an opportunity to move to Abu Dhabi, the capital of the United Arab Emirates, where she taught middle school music for two years. She returned to the United States to earn her doctorate of musical arts at the University of Maryland in College Park, Md. 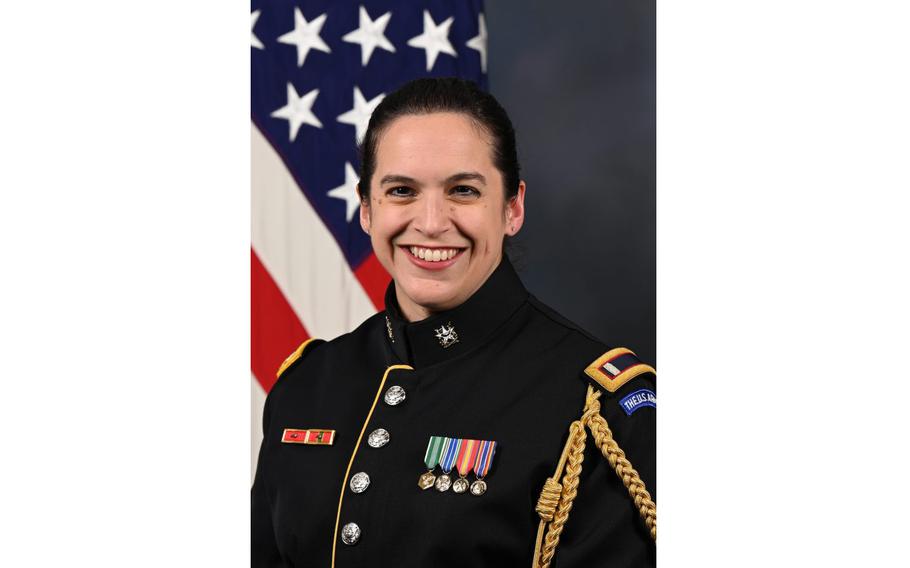 As Officer in Charge of the U.S. Army Chorus, Bonnie Alger is responsible for knowing the health and welfare of all the soldiers and their families within the group and assisting the unit’s supply team with their monthly inventories. (The U.S. Army Band)

It was while she was doing her doctorate in Maryland, Alger said, that she decided to audition for the U.S. Army Band program and join the U.S. Army.

She said she was motivated to apply to become an officer in the U.S. Army Band program because she had several colleagues and classmates who were auditioning for full-time military band positions as they were graduating with their respective degrees.

“I thought it’s really great they get to serve their country and they also get to play music full-time, which they are trained for and they love,” Alger said, “so I decided to see what the military bands offer as far as conducting was concerned... and that’s when I discovered that the U.S. Army held auditions for conductors.”

Alger said one to two officers are selected every year from the audition. If they’re not already in the army, she said the selected officers go to basic training for three months, followed by officer candidate school for another three months. At the end of officer candidates school, she said officers are commissioned as a second lieutenant in the army and must attend the three-month basic officer leader course at the United States Army School of Music in Virginia Beach, Va. After that, she said they’re assigned to their first duty station.