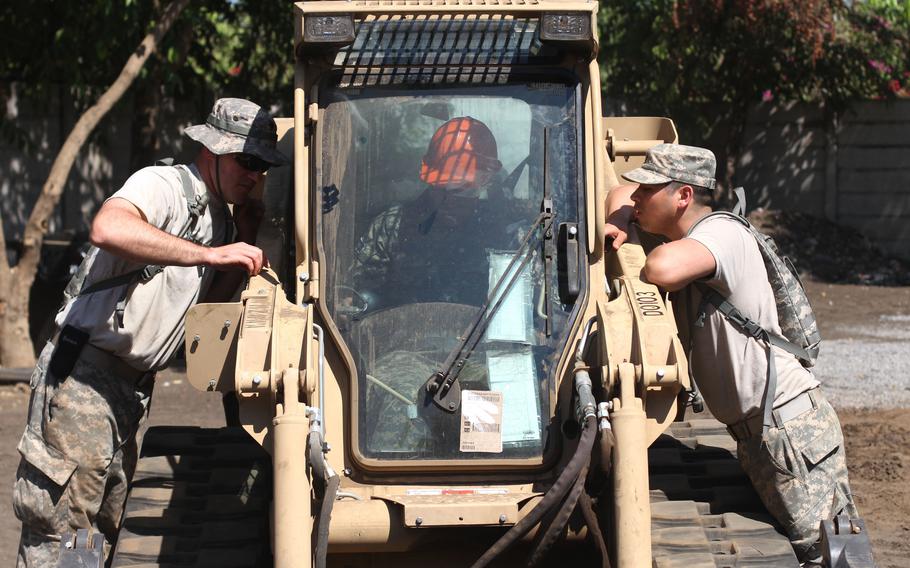 Spc. Phillip Hackley, from Nixa, Mo., and Spc. Ramiro Rodriguez, from Hollister, Mo., combat engineers with the 294th Engineer Company out of Nixa, Mo., instruct an El Salvadoran soldier on how to use the skid-steer, a light weight construction vehicle, on March 31, 2015, in Nuevo Consumidero, El Salvador. The Missouri Army National Guard’s 294th Engineer Support Company is preparing to deploy for between 10 months and a year to the Horn of Africa. (Sarah Anwar/U.S. Army)

CARTHAGE, Mo. (Tribune News Service) — Soldiers from across the state were honored Wednesday as they prepare to deploy for between 10 months and a year to the Horn of Africa.

The Missouri Army National Guard's 294th Engineer Support Company, based in Carthage, held a deployment ceremony Wednesday at Carthage High School to help their families and the public understand what was about to happen and to recognize the soldiers before they leave the country Thursday.

Hundreds of family, friends and members of the public filled the stands at the Carthage High School gymnasium to wish the members of the company a safe journey.

"I wanted to honor all of our boys that's going on this trip and hope they get there safe, get their tour done and get back home safe to all of us," said Betty Harnden, of Webb City, who was on hand to say goodbye to her great-grandson, Spc. Jonathan Lashmet. "I want to bless all of our military serving."

Lashmet, who works for the Carthage School District, is one of more than 100 soldiers deploying to work on construction projects across the range of military operations in the area, according to the Missouri National Guard.

Shawn Lashmet, Jonathan Lashmet's dad, said his son is being trained as an engineer and heavy equipment operator in the National Guard.

"We've watched him grow as a National Guardsman now for the last year and a half," Shawn said. "He's very excited to be a part of this and very excited to serve his country. We're very proud of him as well, we've got the whole family here to help see them off on their deployment, and it's a real honor for us and for him to be here."

"Essentially, horizontal construction is moving dirt for either military operations, and vertical construction means we can build libraries, we can build schools, we can build hospitals and medical facilities on the military side and the humanitarian side," Maevers said. "As engineers, we kind of get parsed out because we can do a lot of jobs, and the unique part of it as National Guardsmen, we have people do this on a full-time basis. We have carpenters, we have plumbers, we have people doing this trade every day, and that's why the U.S. Army wants us to keep on doing their work for them."

Brig. Gen. Jim Schreffler of the Missouri National Guard spoke at the ceremony about the importance of recognizing the work the soldiers have done to prepare and the work they'll do in their time in Africa.

"They have a very important mission downrange, and it just doesn't happen overnight that they're ready," Schreffler said "They've put in a lot of hard work, and this is validation for that hard work, so it's a chance to honor that hard work and for their family members to have some type of closure at this juncture to send them off to do good things as a community."

Spc. Jared Alverson, 22, of Exeter, said this is his first deployment and that he's excited for the opportunity to do his duty overseas.

He brought his wife, Damaris Alverson, 21, and 3-month-old daughter Emily. Their 2-year-old son, Jacob, was with family during the event.

"I'm very excited for the opportunity and for what's in store, but I also respectfully understand the strain it'll have on my family as well and the responsibilities that will be passed down to those around me," Jared Alverson said. "It's bittersweet. We're preparing for a yearlong deployment. It could be shorter, it could be longer depending on what the mission states."

"I'll be missing my daughter's first birthday, I'll be missing my son's third birthday, our anniversary, all those different things," he said. "But it's what we do in the Army. We put that aside so the nation can go first. I've been in the Guard for two years, and I have six more years in my enlistment."

Schreffler said he's been deployed three times and knows the emotions flowing through the soldiers.

"For those who are deploying for their second or third time, they've done it before, they're just ready to get the clock started," Schreffler said. "For the ones who have never deployed before, there are a lot of anxious feelings about how will they endure such a long separation from their families, how will the deployment go, what can they expect. There's a lot of uncertainty, and that's where the team comes together and props each other up and supports each other."

Damaris Alverson said the family has known for a few months that the deployment was coming and they've been getting ready.

"We've been preparing our son a lot," she said. "He's only 2, but he's a pretty smart kid, so we've been telling him Daddy's going to work for a while and things like that. I'm really confident about this time. We have a lot of family, and I'm really confident in our family and the support we have. I think we'll be OK."

Maevers said he's leaving on his third deployment in 12 years but his first in command of more than 100 soldiers.

Maevers, from Lee's Summit, attended the ceremony with his parents, Jim and Deb Maevers, wife Catherine, and sons Liam, 5, and Everett, 2.

"Essentially I'm responsible for every single individual," he said. "That's not just personally awe-inspiring for me, it's exciting. I'm motivated, and this is why I'm in this organization — to do this and lead these folks and hopefully we are successful in our mission and everyone goes there and comes back."

Maevers said he and the soldiers appreciated the crowd that came to see them off.

"This was an amazing sized crowd. I was honestly not expecting this," Maevers said. "I think everyone and all of their family came, and it shows the support of the family and of the community here in Carthage and Southwest Missouri."