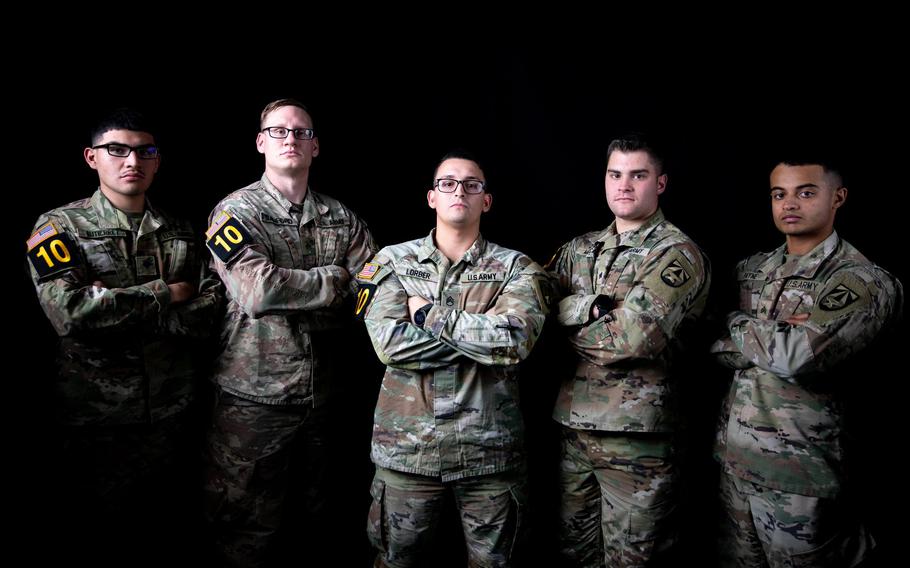 Spc. Jose Gutierrez (left to right), Staff Sgt. Cody Sanford, Staff Sgt. Joshua Lorber, Sgt. Marcus McCann and Sgt. Jackie Payne, stationed at Fort Detrick’s United States Army Medical Research Institute of Infectious Diseases, were one of 12 teams from around the world that participated in the Army’s first-ever Best Squad Competition. The competition, which took place at Fort Bragg in North Carolina from Sept. 29 to Oct. 7, featured a variety of fitness and combat-related challenges that were designed to test participants on their individual skills, as well as their ability to work together as a team. (U.S. Army Medical Research Institute of Infectious Diseases/Facebook)

(Tribune News Service) — Staff Sgt. Joshua Lorber, a trained combat medic stationed at Fort Detrick, is still physically recovering from a competition that has been over for more than two months.

His left ankle, which he twisted twice in the span of 12 hours, is broken. And even though Lorber described it as “just” a hairline fracture, he said it’s painful.

He’s also going to need surgery to fix one of his middle fingers, which he cracked in two places during a combative match — and didn’t get treated until after the competition finished.

Still, Lorber doesn’t regret participating in the U.S. Army Best Squad Competition, or not dropping out when he was injured. Far from it.

“As a staff sergeant, you get one chance to compete at this level of competition in your entire military career,” he said. “This was my one chance, and I was not going to throw it away.”

Lorber and four other soldiers stationed at Fort Detrick’s United States Army Medical Research Institute of Infectious Diseases were one of 12 teams from around the world to be selected to participate in the Army’s first-ever Best Squad Competition.

The competition, which took place at Fort Bragg in North Carolina from Sept. 29 to Oct. 7, featured a variety of fitness and combat-related challenges that were designed to test participants on their individual skills, as well as their ability to work together as a team.

From start to finish, the competition was a grueling test of mental, physical and emotional endurance. It included some of the hardest days Lorber has experienced in his Army career, he said.

Compared to the Best Squad tests, “boot camp was a picnic,” said Lorber, who served as squad leader for the five-member team representing the U.S. Army Medical Research and Development Command.

The squad was assembled earlier this year, after the five soldiers excelled in a test of their individual skills at USAMRIID. They were then victorious together at competitions on the USAMRDC and Army Futures Command levels.

While training for the competition together, the soldiers got to know each other’s strengths and weaknesses.

Lorber, for instance, learned that Gutierrez is the “fastest human alive,” while Sanford holds a well of tactical knowledge.

Payne is extremely resilient, Lorber added, and McCann is a “beast” in terms of strength.

On Wednesday, the squad sat around a conference room at USAMRIID, cracking jokes and making fun of each other. It was obvious how close the soldiers were.

Participating in the Best Squad Competition showed Payne just how much his body could handle, he said. The squad hiked 80 miles over the course of three days — completing surprise missions and tasks along the way — during the final competition at Fort Bragg.

“It was no joke. It was very, very fierce,” Payne said. “I know that there were times where I was like, ‘Man, I don’t know if I can do this.’ But one thing I will say is that having these guys with me kept pushing me forward.”

“When I had these guys around me, it felt like there was no limit to what had to be done and what could be accomplished,” he said.

As squad leader, Lorber faced some challenges on his own. Among the hardest parts of the final competition, he said, was the sleep deprivation. He had to stay awake as his soldiers rested to plan for the next day’s mission.

By the end of the competition, he hadn’t slept in two and a half days, he said. When his squad returned from Fort Bragg, he stayed in bed for almost a full day.

When someone is denied food and sleep, Lorber said, their body wants to shut down.

“You start to lose motor function. You start to hallucinate, you start slurring your words. I get migraines, so as soon as I started losing sleep, a migraine hits,” he said. “The mental challenge of it is, you know there’s an exit, but there’s no way you can grab that doorknob.”

It felt good to prove that stereotype wrong at the competition, the soldiers said.

“I’m very proud of them,” Sanford said of his teammates. “I watched them push themselves to their limits. ... And they went even past that. And we all stayed together and just all had a good laugh, and we kept going.”