(Tribune News Service) — During his first deployment at Al Dhafra Air Base in United Arab Emirates, Army Sgt. Anthony Castillo made his mark.

Between March and September, the mobility specialist assigned to the Bravo Battery 3-157th Field Artillery Regiment and Colorado National Guard painted 10 murals around the military base 20 miles south of Abu Dhabi.

"I'm trying to grasp peoples' inspiration," said the Denver native who now lives in Milliken. "People feel a certain way toward art, whether positive or negative, and for me that's the goal — to make them feel."

The first mural came as a result of a gift exchange between Castillo's Bravo Company and the United Arab Emirates Armed Forces. Gift exchanges are a common occurrence as the two military groups spend time training together. Castillo offered to paint a 20-feet-by-24-feet canvas of a HIMARS, a rocket launcher.

After that first big art project, Castillo began daydreaming about doing a mural for his company that featured a banshee from a folklore tale about a screaming ghost. 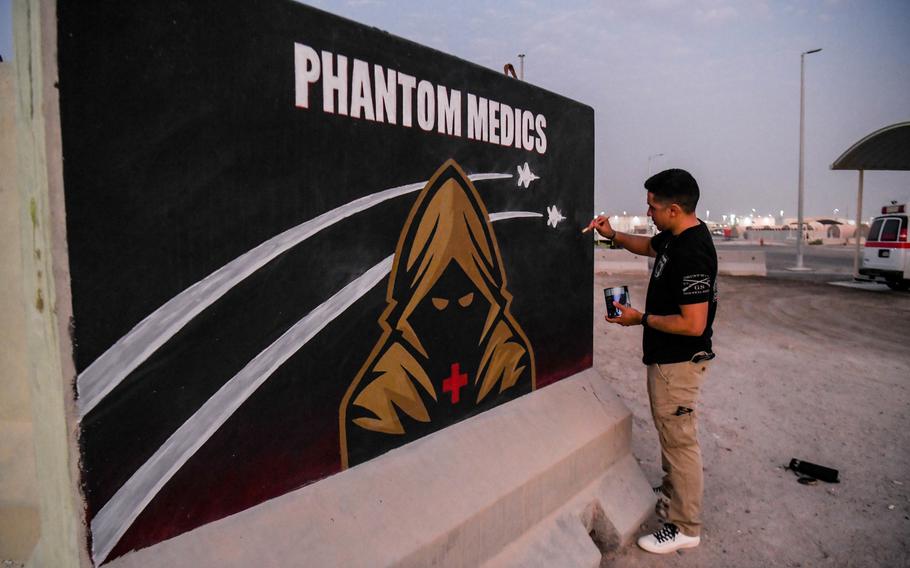 "It's common to go to a military base overseas and see murals on walls," he said. "Units leave their mark behind — their mascot or something signifying who they were. I chose a good location with foot traffic and that's when my exposure started to peak."

Majors from around the base came calling, asking Castillo if he could paint walls for their units. He did two for the Air Force medical team, then some smaller drawings and paintings by request. There also was a memorial mural he painted for a mentor who died; a Colorado flag for a military company based out of Colorado; another intended to encourage soldiers to reach out for mental health support; a unit's crest; and a large painting for Army Explosive Ordinance Disposal of an ox, the national animal for UAE.

"I'm trying to inspire others," Castillo said. "A lot of the painting was done on my own time. I hope those who arrive at Al Dhafra see and want to do the same for their own unit."

Art has always come naturally to Castillo, who is still in the Colorado National Guard and also works as a truck driver for Coors Brewing Co. During his younger years, he painted many murals around Denver, and often incorporated his Mexican heritage. He also creates tattoo imagery for friends.

"Painting keeps me calm and helps my mental being," he said. "A lot of people play video games or board games when they deploy, but painting was one way for me to cope with my anxiety and time away from friends and family." 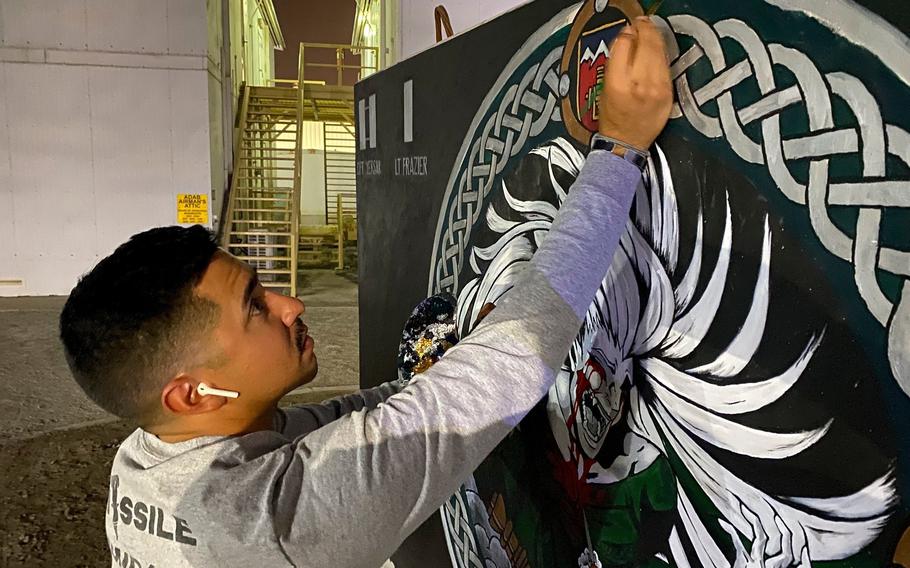 U.S. Army Sgt. Anthony Castillo, a mobility specialist assigned to the 3-157th Field Artillery unit and Colorado National Guard, paints a t-wall with his unit’s adopted patch, April 20, 2022, at Al Dhafra Air Base, United Arab Emirates. To avoid temperatures of 120 F or more, Castillo would gather his painting supplies, don a headlamp and begin painting at night. “The Banshee Barricade” took a total of 33 hours over the span of 20 days to finish. (Jeffrey Grossi/U.S. Air Force)