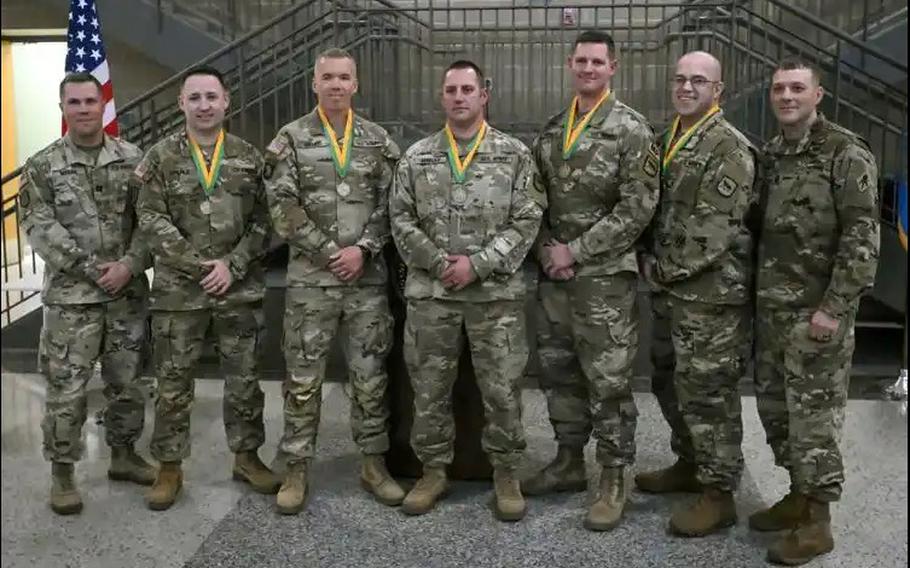 (Tribune News Service) — It was a historic occasion Tuesday at Camp Rapid as five members of the 235th Military Police Company of the South Dakota National Guard became the first in the state to ever receive the Marechaussee Award.

Officially established in 2000, the Marechaussee Award recognizes exceptional dedication, competence and contribution to the Military Police Corps Regiment. It's named after the Marechaussee Corps, formed by Gen. George Washington in 1778 at Valley Forge, Pa., tasked with policing the Army and securing fugitives.

Less than 10% of all military policemen with more than 10 years of service to the regiment are ever awarded the Marechaussee.

It's a full-circle moment for Regimental Command Sgt. Maj. Shawn Klosterman, a Rapid City native, who just happened to be on vacation in town at the time the award was to be presented.

"When I saw the packet and saw I had a close connection with one of the men that endorsed it, and to see it was coming to South Dakota, it's just kind of like fate," Klosterman said. "Fate wanting us to be here."

The ceremony was attended by the highest ranking military policeman in the state of South Dakota, as well as Adjutant Gen. Jeff Marlette, who commended the soldiers as "the best of the best."

"We have a history of doing the MP Corps well in South Dakota," he said. "This unit is amazing; it's truly amazing."

The award is particularly significant for Sgt. Nicholas Allen, who has served for 20 years through three deployments. He's the most-junior recipient of Tuesday's award, and one of very few of his rank to receive such a commendation, according to Klosterman.

"Our unit has done a lot for this state, with the civil disturbance support, [and] going to Washington, D.C., twice," Allen said. "It's nice [to] recognize some of our phenomenal soldiers in our unit that have put this time in and really love just doing what we do and serving this state."

While the medallion hung around Allen's neck, he credits the award to his family: his wife, Erika, son, Luke, and daughters Lily and Hope.

"It's an honor for my family," Allen said. "They've gone through multiple deployments with me and so it's amazing to have them here and go through this, and for my kids to see it because they made sacrifices. Even though I was getting the ribbon put on, it's for them."

Allen also received a Regimental Coin of Excellence from Klosterman, who called it an "extra kudo [sic] for being awesome."

"You have to do a lot to earn it," he said. "I thought it would be a little extra special."