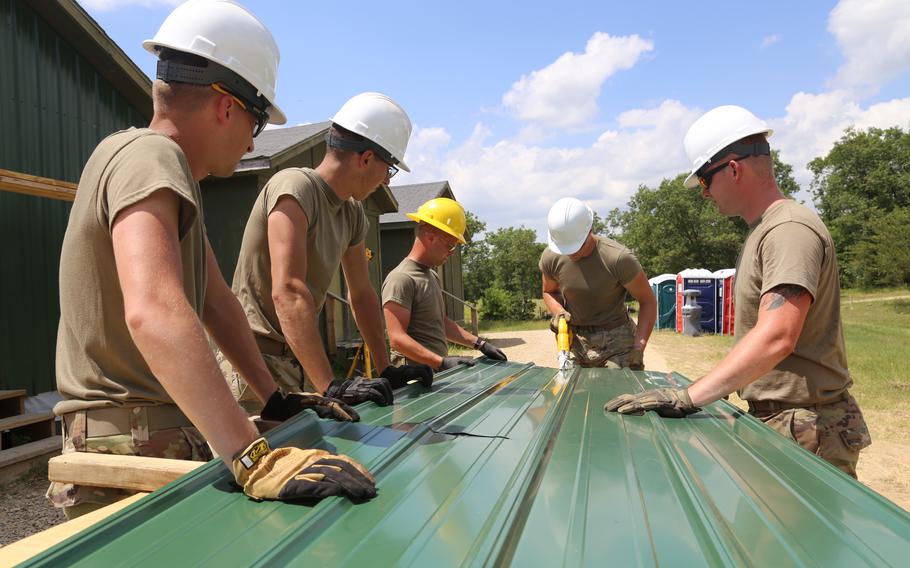 (Tribune News Service) — Members of a U.S. Army Reserve unit based in the Quad-Cities were honing their skills Sunday by helping ensure future baseball players at Davenport, Iowa's Northwest Park will have some shade.

Staff Sgt. Tyler Goodman, of the 389th Engineer Company, said one of the park's original baseball dugouts was knocked down by a violent storm.

"This dugout actually fell over completely," he said. "It was a total loss."

The company has been looking for projects to help its soldiers practice their skills, he said.

"That way, when we deploy, we're better equipped to handle any task that's put in front of us," Goodman said.

So, Davenport and the Army are collaborating to build the new dugout, he said.

The crew for Sunday's project was seven or eight members of the company, including Goodman.

Some of the soldiers were spending most of their time on ladders, working on the baseball dugout's roof, their bodies poking through the wooden frame or perching outside near its edge.

Others were nearby, working on the fence that would also be part of the new structure. The crosshatch framework lay on the grass as they worked to secure the boards to each other.

The breathy stutter of drills joined the scrape of the ladders' feet along concrete, the dull thud of wood shifting and the mix of pop and country playing on the nearby radio.

Spc. Adam Bristow was one of the soldiers working on the roof, dividing his effort between the ladders and the ground.

He was preparing the wooden sheets his fellow soldiers needed to cover the roof's frame, measuring and cutting where needed, then handing them up before joining in for the placement.

Bristow, 31, said he had been in the Army Reserve for 11 years but recently transferred to the company.

He said he loved working on a local project.