As more Alaskans are rescued from wilderness, this is what happens once you hit SOS 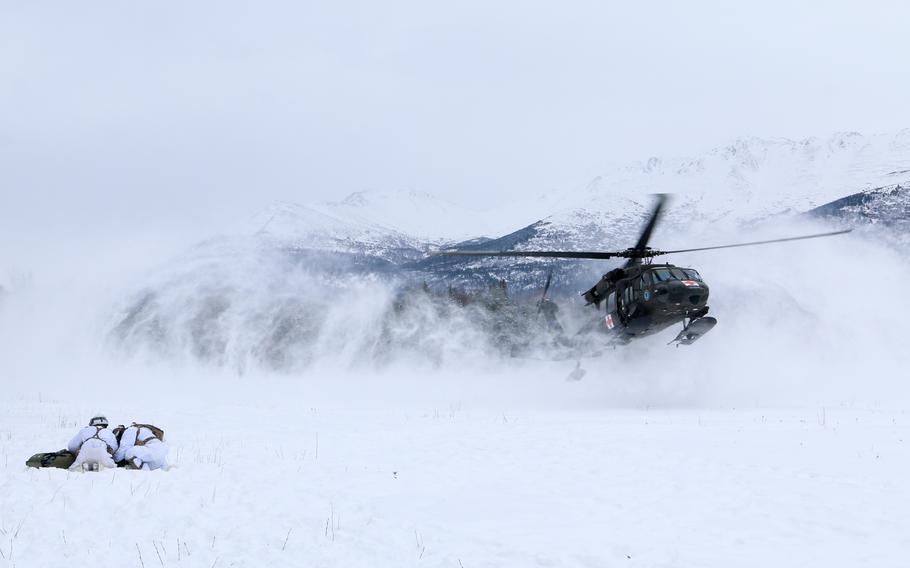 (Tribune News Service) — By the time Sgt. 1st Class Mikana Halloran descended from a helicopter by way of a winch-fed cable toward the top of Crow Pass, her target, a single hypothermic hiker, was stripped down near naked.

“He left all his stuff on the ground. He was just wearing his underwear,” Halloran said of the August rescue.

Stuck in the wet and cold of the Chugach Mountains, the man gradually shed all his soaked outerwear trying to keep it from further freezing him, until, by the time help arrived, he was left in just base layers.

Halloran strapped him into a harness, and the pair ascended into the belly of a Black Hawk outfitted for medical care. There, she jammed heat packs under the otherwise-uninjured man’s armpits before swaddling him in blankets for the flight to an Anchorage hospital.

Halloran, who grew up in Healy, is a medic with the Alaska Army National Guard, one piece of the state’s elaborate web of agencies, organizations and individuals involved in searches, rescues, and recoveries — the technical euphemism for returning the body of a person who has died afield.

The number of search and rescue missions in Alaska is rising, gradually ticking upwards in recent years from a combination of proliferating safety devices, social trends and esoteric but effective reconfigurations in military-governmental bureaucracy. Officials say that taken all together the changes generally mean less searching, more rescuing.

Still, few Alaskans, even those who know in the back of their minds they will be saved if they twist an ankle on a backcountry hike or flip a four-wheeler out moose hunting know much about the intricate system that launches into place once they hit SOS on an InReach or text a spouse to send help.

The short version is: it depends where you get hurt.

To a civilian, the jigsaw puzzle of jurisdiction and chains of command between federal, state, and civilian authorities involved in a Search and Rescue mission is nearly indecipherable, governed by intricate org-charts, jargon-laden acronyms and numerology bordering on the occult.

Where you get hurt or lost determines much of who will end up rescuing you.

Let’s say you are out on the north side of the Alaska Range when you trip over a tussock, falling down a steep stretch of tundra, breaking your leg badly enough there’s no chance you can stand, let alone walk yourself to help. Luckily, you recently spent a few hundred dollars on a safety beacon, and when you hit the SOS button it relays the signal to an array of satellites that then give your coordinates to an out-of-state private company, letting them know you are in trouble. They in turn contact officials in Alaska. And then the real work begins.

Some of the variables to consider as this rescue mission takes shape: are you inside a national park or on state land? Is the pitch of the hill steep enough to merit a helicopter hoist rescue? Is there a local Search and Rescue crew in the relative vicinity that the Alaska State Troopers can activate? Is it a holiday or weekend? How much daylight is left? Which rescue entities have enough personnel on hand for this particular call out?

The considerations are no more straightforward if your trouble occurs on water, where rivers and oceans are overseen by entirely separate chains of command.

In general, the Alaska State Troopers take the lead when a distress signal comes in and handle most of the Search and Rescues that happen on land. They work hand-in-glove with local SAR crews, volunteers, and regularly get help from helicopters, planes, and personnel under the military.

Plane crashes, though, fall under a wholly different chain of command. And even in a normal year Alaska sees a lot of aviation accidents.

“It’s been been pretty busy. There’s been a lot of airplane crashes for us this summer,” said Lt. Col. Christy Brewer who directs the Alaska Rescue Coordination Center.

The center is staffed around the clock by at least 12 members of the Alaska National Guard, and handles aeronautical search incidents, which in a state with so much aviation makes it a key player. The center functions like a football coach diagnosing a given situation and picking plays accordingly, but never actually taking the field. At the entryway is vintage map peppered with pins demarking airplane crashes. The display is a relic. Years ago, the Guard replaced it with a Google map.

Much of the RCC’s work is parsing whether there’s a real need for help, or if there’s just been some kind of miscommunication. Signals arrive all the time that could suggest trouble, but are resolved with a phone call or runway check confirming the person in question is fine but, for example, accidentally bumped the emergency transponder in their cockpit.

This fall, the Guard launched a search for a moose hunter 60 miles northwest of Galena after a distress signal pinged from his airplane’s safety equipment. The RCC scrambled an air crew, which eventually located the man. He’d left his plane and rafted six miles down river, ultimately relaying by radio to the guardsmen that he didn’t need any help.

“He crashed and probably didn’t realize that the authorities are already notified. And we’re going to act and go rescue you, and treat it as distressed until we can be proven otherwise,” Brewer said.

For complex rescues, the center taps what is referred to as the “rescue triad,” three squadrons under the Air Guard’s 176th Wing comprised of helicopter teams, C-130 cargo plane crews, and pararescuemen called almost exclusively “PJ’s.” Those are the elite Swiss Army knives of the search-and-rescue world, expected to parachute out of planes, hike up mountains, dive below water and either extract a patient or else keep them alive in inhospitable wilderness for days.

“We’re the only ones that would do what we do,” said Senior Master Sgt. Chris Robertson, a Colony High School grad with decades of experience on the kinds of rugged backcountry and combat rescues the PJ’s are known for.

Even though COVID-19 pushed more people to recreate outdoors, the pandemic actually led to a calmer-than-normal SAR season in Alaska during 2020.

Along the road system there were fewer out-of-state tourists requiring assistance. In rural Alaska, many communities barred inter-village travel in order to curb viral spread. All that led to fewer rescues.

“A lot of the communities out in western Alaska were locked down. So that dropped the number of individuals visiting family members back and forth, or going to the larger hubs to get groceries. Same with southeast,” Fussey said.

But since then, the numbers have reversed course and kept with a longer-term trend of slowly ticking upwards. Between July 1 and Sept. 11 this year, Alaska saw 176 individuals rescued or recovered. During the same period last year it was 146, and 145 the year before that.

One of the factors Fussey and others point to is the steadily growing popularity of personal locator beacons and similar devices that can relay positioning and distress signals to officials. According to Brewer with the RCC, the number of such devices sold has increased by 10% each year since 2016. The effect for rescue coordinators is receiving more pings, whether or not the event generating them is serious. In earlier eras, a hunter or hiker in trouble might not have been reported missing until days after she was due back home. Or they might have been spotted by a good samaritan, extricated from harm without a formal report ever reaching the RCC. Now, though, more people in the backcountry carry a piece of hardware with a satellite-linked SOS button.

The main frustration in the rescue community with locator beacons is that too often people don’t register them, omitting crucial information like the owner’s identity, where they live, an emergency contact, all of which can save searchers hours of hunting for clues about who might have pressed that help button.

“I can’t stress that enough,” Fussey said. “If you have an ELT or personal locator beacon, once you purchase it, register it.”

‘Everybody knows somebody who’s been rescued’

Another substantial change in the state’s SAR system is an infusion of helicopters over the last half decade. Beginning in 2017, the Alaska Army National Guard changed how it used helicopters, from an offensive mission to general support aviation. That seemingly remote bureaucratic adjustment led the Army Guard to mix different helicopters into its fleet and build up its capacity for in-flight medical care. Members of the unit, many of whom were reared in Alaska, searched for ways to add extra capabilities to the state’s SAR system that were missing.

“What we try to do is to complement each other and not compete,” said Capt. Cody McKinney, an East High grad who up until a few months ago was the medevac commander for the Army Guard.

“Where we tend to excel is as high altitude, high angle, dynamic hoist profiles,” McKinney said of the Army Guard’s specialty, meaning rescuing people up high on steep mountains by scooping them into a helicopter hovering overhead, or sometimes in actively in motion to avoid the rotors blowing the injured patient off a cliff.

Overall, the shift in organizational priorities has added new hardware and personnel to rescue missions across the state. Not just in Southcentral where the majority of the Army Guard’s fleet is based, but also in Western Alaska where the unit tries to keep small numbers of personnel year-round in a few hub towns. That capacity was in high demand in the weeks after the Merbok storm slammed into communities along the Bering Sea coastline. During assessment and recovery operations, Army Guard Black Hawk helicopters stationed in Nome and Bethel flew thousands of miles ferrying public officials between communities and bringing in supplies.

“I would say up until maybe two years ago, we kind of got all the leftover missions,” said Chief Warrant Officer 3 Michael Miller, who grew up in Western Alaska and recently finished a two-year posting in Bethel.

As a relative newcomer to the state’s rescue community, the Army Guard picked up work other entities passed on for one reason or another. Often that meant back-filling capacity on weekends and holidays. Or missions like body recoveries that rarely bring positive attention or commendations, but helped hone the unit’s technical acumen.

“We’re all Alaskans, we all grew up here,” Miller said. “Everybody knows somebody who’s been rescued.”