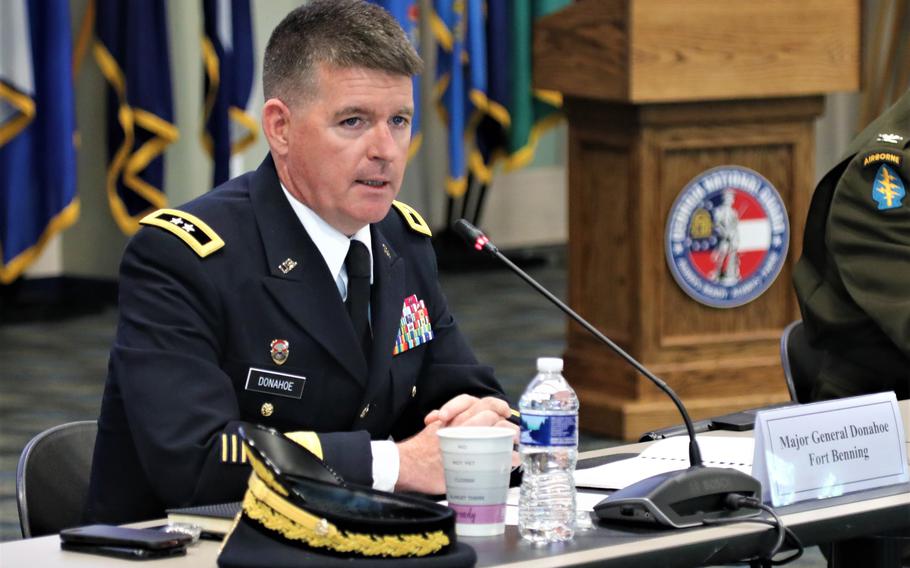 An investigative report that faulted a two-star general for publicly defending female troops following ridicule by a right-wing pundit has opened up the Army to blowback over its commitment to stand up for women in the ranks.

Maj. Gen. Patrick Donahoe, the former commander of the Maneuver Center of Excellence at Fort Benning, Ga., brought “negative publicity” to the Army in connection with his tweets directed at Fox News host Tucker Carlson and others, according to the Army report, which was obtained by Task and Purpose.

The controversy centered on Donahoe’s decision to take issue with Carlson over a March 2021 segment in which the Fox host described the U.S. military as becoming “more feminine” while China’s becomes “more masculine.”

Carlson complained about Pentagon efforts to make military service more appealing to women, such as changes to grooming standards that allow new hairstyles and the introduction of a flight suit for pregnant troops. 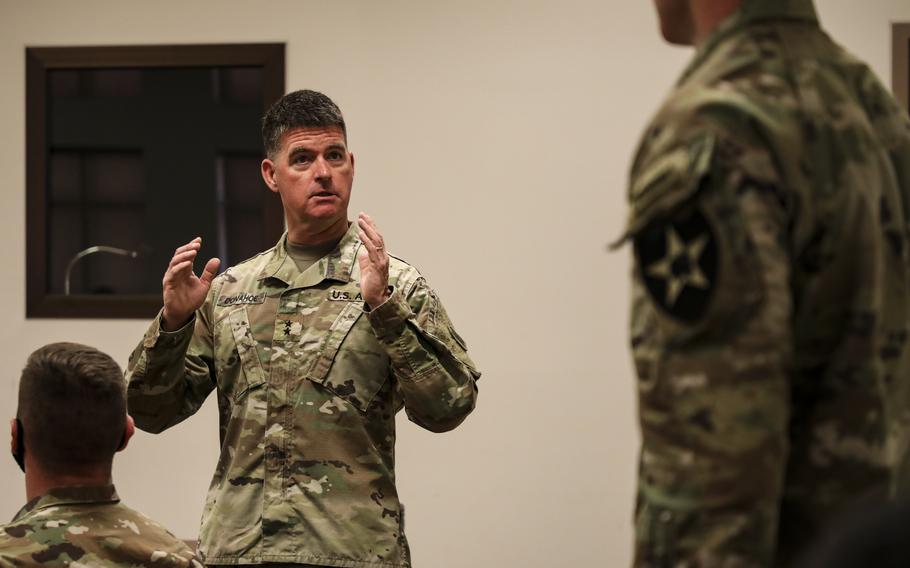 Maj. Gen. Patrick Donahoe speaks to soldiers at Camp Humphreys, South Korea, in May 30, 2020. Donahoe received criticism in a recent Inspector General report for comments he made on behalf of female service members on Twitter. (Steven Close/U.S. Army)

Donahoe was quick to respond, posting a video on Twitter in which he reenlisted a female staff sergeant at Fort Benning and wrote “just a reminder that @TuckerCarlson couldn’t be more wrong.” Several other Army leaders made similar remarks on Twitter.

The Army investigation, however, determined that the “national media coverage” that followed from Donahoe’s statements “brought a measurable amount of negative publicity to the Army, enough that (the Office of the Chief of Public Affairs) warned (the Secretary of the Army) of the fallout,” Task and Purpose reported.

The Army’s rebuke of Donahoe, which also included criticism of his public pushback on Twitter over COVID-19 vaccine mandates in the military, has sparked an outcry in military circles.

On Thursday, the Army was among Twitter’s top trending topics, with many of the 235,000 tweets related to the Donahoe case.

For the Army, the situation comes as the service struggles to attract sufficient numbers of new recruits. Some critics say its failure to back Donahoe in his defense of female service members could have a chilling effect.

“Army leadership is sending a very clear message: Pleasing gutless demagogues and loud mouthed extremists is more important than showing support for your brothers and sisters in arms,” wrote one popular military Twitter user who goes by Rising 1L Tom.

Another prominent military Twitter personality known as Lethality Jane made a similar observation: “Pretty depressing to consider that the military I’ve spent over a decade of my life serving in is now considering whether to punish a General Officer for stating that my existence does not make a mockery of the Army.”

Thousands of such messages flooded the social media site.

Pretty depressing to consider that the military I've spent over a decade of my life serving in is now considering whether to punish a General Officer for stating that my existence does not make a mockery of the Army.

The situation has delayed Donahoe’s planned retirement while the Army investigated. It’s not clear what punishment, if any, he faces.

“Even just the suggestion that the Army would punish MG Donahoe for doing exactly what we should expect of good leaders undermines nearly everything the Army preaches,” wrote Mother of Tanks, another military Twitter user.

But investigators said that Donahoe’s tweets to Carlson “exhibited poor judgement” and that the “subsequent media coverage drew national attention … and it cast the Army in a negative light,” Task and Purpose reported.

The military has grappled for years with how leaders should engage with the public on social media sites like Twitter.

Donahoe was one of its earliest and most active practitioners. During a panel discussion in 2019 focused on social media use in the Army, Donahoe encouraged soldiers to be engaged.

“The richness of the discussion outweighs the risks,” he said at the time.