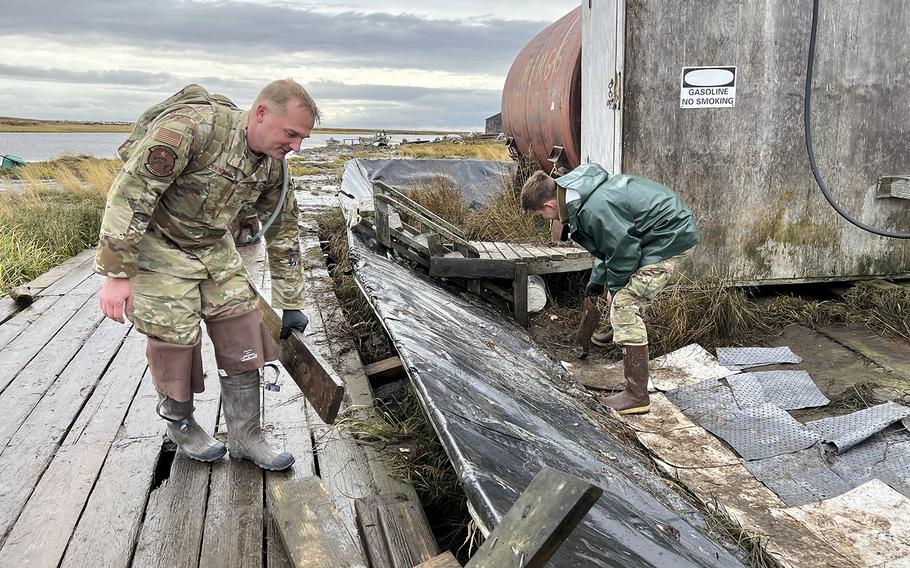 The move unlocks additional aid to help communities with their ongoing recovery efforts.

“Assistance can include grants for temporary housing and home repairs, low-cost loans to cover uninsured property losses, and other programs to help individuals and business owners recover from the effects of the disaster,” reads the declaration.

Elected leaders thanked federal agencies during a briefing at the governor’s office in Anchorage Friday evening as they provided an update on storm recovery.

“Everyone is pulling together on this,” said Gov. Mike Dunleavy, applauding cooperation among an array of state and tribal entities alongside Alaska Native Corporations, non-profits, and volunteers. “We’re pretty positive that we’ll get a lot of this recovery done before freezeup,” Dunleavy said.

According to the state’s latest assessments, 103 homes sustained damage from the storm, with several dozen people still staying in community buildings. Personnel from the Alaska National Guard and other organizations have helped remove around 20 tons of debris, the biggest share of which was in the community of Golovin, according to Maj. Gen. Torrence Saxe, who heads the Guard and Department of Military and Veterans Affairs.

According to the Department of Transportation and Public Facilities, the state has secured federal highway relief funds, and is making $15 million available in procurement for contractors to begin repair work to roads.

Newly installed U.S. Mary Peltola was on hand at the briefing, having arrived directly from a flight back from Washington, D.C.

“Families have lost multiple boats, multiple fourwheelers,” Peltola said. “These are not recreational.”

She will be traveling to Nome over the weekend with members of the Federal Emergency Management Agency, and plans on helping to emphasize Alaskans’ unique needs when it comes to subsistence equipment and vehicles.

“I’m also very concerned about subsistence camps,” Peltola said. “Those are things I”m going to be watching for.”

Peltola said the Interior Department is allocating $2.6 million through the Bureau of Indian Affairs to 45 communities for purchasing food, water and other critical supplies.

Sen. Lisa Murkowski was already in the Bering Strait region Friday, and plans to visit affected areas over the weekend.

“So many communities throughout Western Alaska have been devastated and are in dire need of federal support. I appreciate the President for listening to us and recognizing the urgency of this situation. With winter weather looming, this federal assistance can’t come soon enough,” Murkowski said in a statement.

Sen. Dan Sullivan was not at the briefing or in-state, owing to military training, according to Dunleavy.

“This has been an extremely coordinated response effort,” said FEMA Administrator Deanne Criswell, who flew to Alaska from Puerto Rico, which is also contending with the aftermath of a destructive storm. “The state was undoubtably ready to respond to this storm.”

Criswell and other members of FEMA are preparing to visit western Alaska over the weekend. State, tribal, local governments, and some nonprofits are eligible or federal funds on a cost-sharing basis, though the state has asked for its share to be waived given the severity of the storm and tight timeline before winter freeze up.

“This is gonna be ongoing recovery,” said Dunleavy, who spent the last several days visiting impacted areas. “Keep your receipts, keep your invoices.”