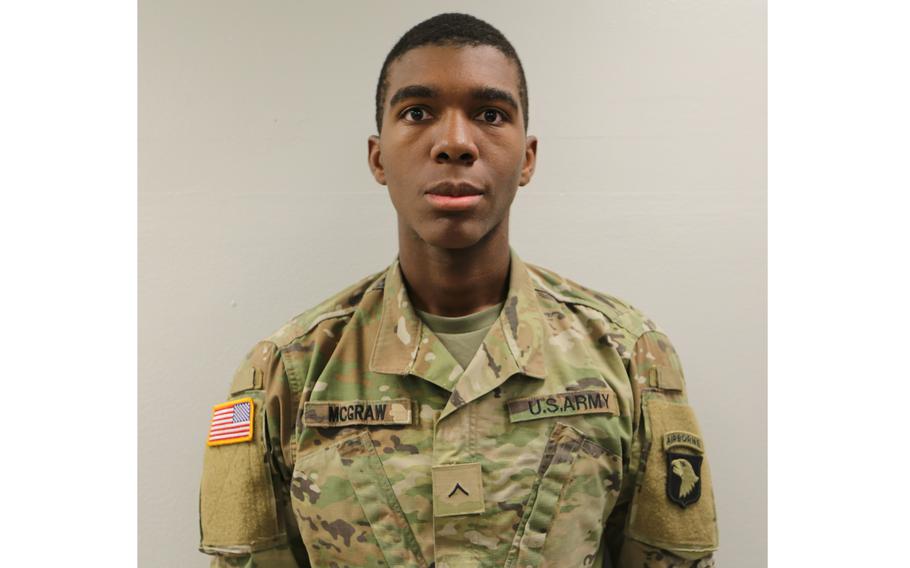 Spc. Jabori McGraw, 20, was assigned to the Headquarters Battalion of 101st Division Artillery, 101st Airborne Division (Air Assault) at Fort Campbell, Ky. He died Saturday, Sept. 10, 2022, after falling into the Red River in Tennessee while hiking with friends. (Photo provided by Fort Campbell)

A 20-year-old soldier assigned to Fort Campbell, Ky., died Saturday after falling into a Tennessee river during a hike with fellow soldiers, base officials said Tuesday.

Spc. Jabori McGraw was a soldier with the Headquarters Battalion of 101st Division Artillery, 101st Airborne Division (Air Assault). The Clarksville Police Department said it received a call at about 3:45 p.m. Saturday from someone at Billy Dunlop Park who said a friend was in the Red River and was no longer visible.

Local police, the Clarksville Fire Rescue and the Montgomery County EMS dive team responded to the scene and closed the park, police said. They suspended the search overnight and returned at 9 a.m. Sunday.

McGraw’s body was found about 40 minutes later, according to police. Foul play is not suspected.

"The entire division artillery team is saddened by the loss of an outstanding soldier. He was a valued team member who had the ability to light up any room he was in," Col. Patrick Moffett, commander of 101st Division Artillery, said in a statement. "His commitment to getting better every day was respected by his subordinates, peers and leaders. Our deepest condolences go out to his family. They are in our thoughts and prayers during this tragic time."

McGraw was born in Illinois and enlisted in the Army in 2020 from St. Louis, Mo., as a signal support systems specialist, according to Fort Campbell. In July 2020, he attended boot camp at Fort Jackson, S.C., and then moved to Fort Gordon, Ga., for the Signal Advanced Individual Training.

Roughly 30,000 soldiers are assigned to Fort Campbell, which stretches across 106,700 acres at the Kentucky-Tennessee state line. It’s home to the 101st Airborne Division and 5th Special Forces Group.