Move over, Iron Man: The Army has a new suit to solve soldier back pain 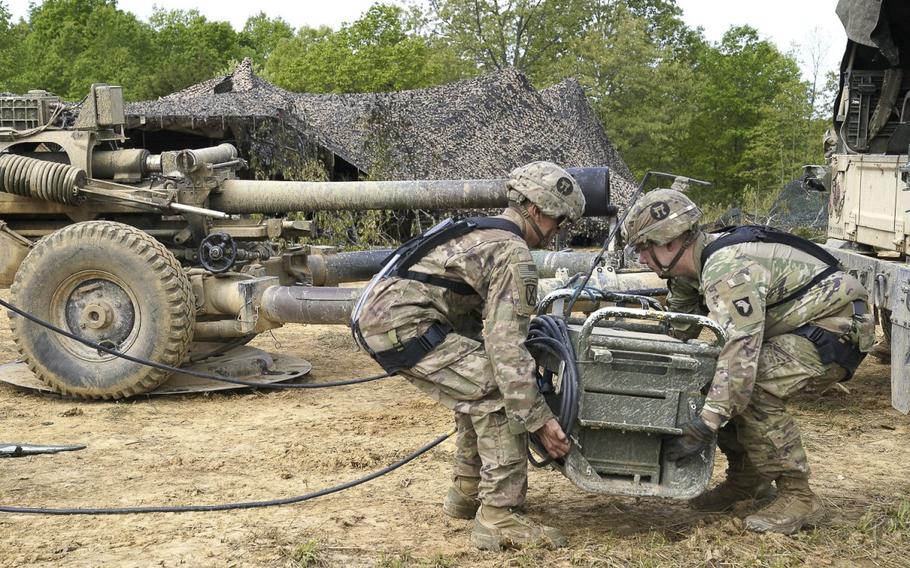 The Army’s Pathfinder program, led by a collaborative team of Soldiers from the 101st Airborne Division at Fort Campbell, Kentucky, and engineers at Vanderbilt University, brought about exoskeleton prototypes that augment lifting capabilities and reduce back strain for sustainment and logistics operations.  (Larry McCormack/U.S. Army)

Futuristic military dreams of an Iron Man exoskeleton suit might be giving way for something simpler: a lightweight wearable to help with back pain.

The new suit, which weighs just three pounds, is a soft harness that soldiers strap around their shoulders and legs. Soldiers can press a button on the suit by their left shoulder, which activates the straps running along their back to help ease the burden when lifting heavy objects like artillery rounds, boxes or guns.

Its name is a mouthful, dubbed the Soldier Assistive Bionic Exosuit for Resupply, or SABER. It is developed by the U.S. Army and Vanderbilt University, and slated to be deployed in the field in 2023.

SABER is a departure from the clunky, robotic "warrior suits" the military has designed in the past, and is instead a lightweight, flexible accessory soldiers can wear while moving heavy machinery or artillery around. Creators say this approach is better, because it solves a specific problem soldiers have while not getting in the way.

"[The Army] initially tried to create Iron Man," Karl Zelik, a lead designer for SABER and associate professor of mechanical engineering at Vanderbilt University, said. "They had these full-body robotic systems that hoped to do everything but ultimately effectively did nothing because they [were] too bulky and heavy and complex and costly . . . This exosuit is about as far away from Iron Man as you can get."

Back pain is widespread in the Army and has a significant impact on operations. Lower back injuries result in more than 1 million lost, or limited, service days for soldiers each year, according to the U.S. Army Public Health Center. Roughly 460 soldiers are diagnosed with back overuse injuries every day, U.S. Army data shows.

To solve that, the military turned to its Pathfinder project - which aims to innovate Army operations by having soldiers collaborate with universities - and invested $1.2 million into creating the SABER prototype suit.

To date, roughly 100 soldiers have tested the suit at three different Army bases. In May, 11 soldiers with the Army's 101st Airborne Division used the SABER exoskeleton suit while on a training mission at Fort Knox, which required them to lift heavy boxes of ammo and move a howitzer gun multiple times a day, Zelik said.

"Lifting 60-pound rounds you get worn out," Dale Paulson, a private first class with the 101st Airborne Division who tested the suit, said in a statement. "Wearing the suit really helped a lot, especially with getting the rounds out of the back of the truck."

Now, the design of the suit moves from Vanderbilt University and the Pathfinder project to a spinoff corporation called HeroWear that will manufacture the device, Zelik said.

The challenge ahead, Zelik added, is getting the product approved through the Army's "very complicated" acquisition process. If that happens, the effects could be significant.

"You have a lot of people who are getting hurt," he said. "We have the opportunity to help prevent some of those injuries."