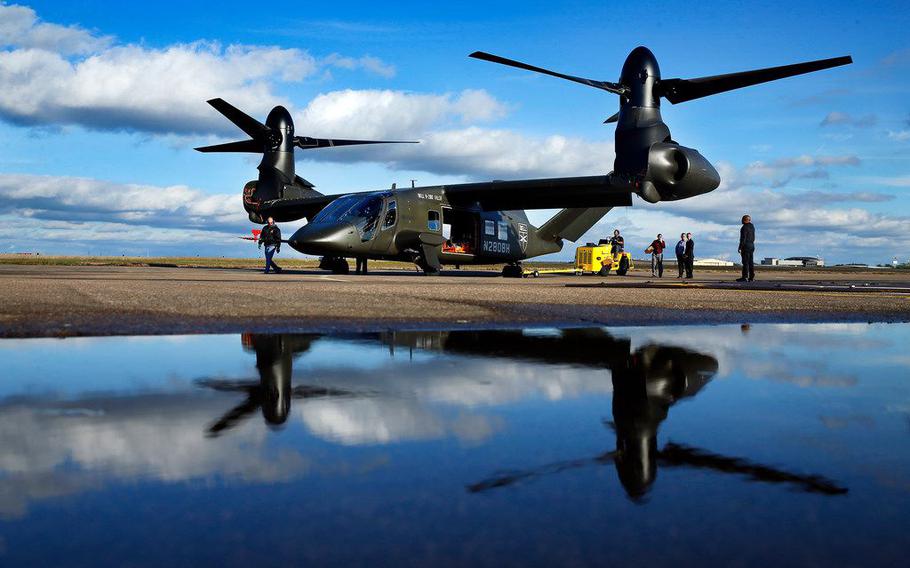 The V-280 Valor tilt-rotor, a next-generation aircraft that Bell wants to build for the U.S. military, was reflected in rain water after demonstrating its skills at the Bell Flight Research Center in Arlington. (Tom Fox/TNS)

FORT WORTH (Tribune News Service) — Executives at Fort Worth-based Bell are optimistic the company could soon land a coveted deal to provide the U.S. Army with a new long range assault aircraft to replace its iconic Black Hawk helicopter.

Bell supplies aircraft to the U.S. military and private sector customers and has been building new facilities across North Texas, including a 140,000 square foot Manufacturing Technology Center in Fort Worth.

The companies also are vying to win a separate assignment to produce the army’s new attack reconnaissance helicopter. At stake in the high-profile competitions: the billions of dollars and thousands of jobs involved in producing a generation of army aircraft.

Bell officials said securing either deal would likely result in hundreds of additional jobs in the Fort Worth, Amarillo and Arlington areas as well as other parts of the country, although they said it would be inappropriate to speculate on specific numbers.

Bell currently employs more than 4,500 workers in the Dallas-Fort Worth area.

Bell has proposed the tilt-rotor V-280 Valor as the army’s next long range assault aircraft and the Bell 360 Invictus as the service’s future attack reconnaissance aircraft. If it wins either, the company plans to perfect production at its Manufacturing Technology Center.

Glenn Isbell, the company’s vice president of rapid prototyping and manufacturing innovation, described the center as a “test kitchen” where Bell can craft “recipes” for manufacturing different components of those aircraft and others in the future.

The center is intended to make dramatic advances in cutting-edge manufacturing techniques rather than incremental improvements.

“This particular facility is really a place where we can enable and try to change the way we manufacture our hardest-to-build parts,” Isbell said.

The first aircraft would come from the center as the company fine-tunes the process before moving large-scale production to other locations. Bell could build entirely new facilities or expand its existing plants to churn out the large number of aircraft the army is expected to order.

Coffman said producing the advanced aircraft will require highly skilled employees and the company will look to the area’s technical schools and junior colleges to help provide a pipeline of future workers.

“It’s going to be a manufacturing boost to the Fort Worth area, certainly, and advanced manufacturing too, not just the way we’ve done things traditionally in the past,” Coffman said.

Helicopters and their ability to swiftly move personnel and equipment over challenging terrain transformed how the army fought in the Vietnam War era.

Over the years, those helicopters have evolved to increase their airspeed, range and capabilities. But now the army is looking to respond to modern threats with major boosts across all categories.

Bell’s V-280 Valor prototype features a tilt-rotor design that combines the vertical take-off and hovering ability of a helicopter with the speed and range of an airplane.

Bell has plenty of experience when it comes to tilt rotors. Its pioneering V-22 Osprey was the first production tilt rotor aircraft.

Company officials say the V-280′s range and speed will allow a group of aircraft to attack in a dispersed formation, flying around threats before massing on a target.

On the other side of the competition, Sikorsky and Boeing tout the benefits of their Defiant X, which they describe as “the fastest, most maneuverable and most survivable military helicopter in history.”

Sikorsky also cites its experience supplying the army with Black Hawks and other helicopters.

The army aircraft being developed are key to countering modern threats, Maj. General Walter Rugen, who oversees the aviation modernization efforts known as Future Vertical Lift, said during a recent event at the Washington-based Center for Strategic and International Studies.

He said the Black Hawk has been “tried and true” but is now 50 years old.

“And what we’re finding is just that analog age will not give us the decisive transformational capabilities we need on the future battlefield,” he said.

Rugen said the fighting in Ukraine has validated core principles behind the army’s modernization efforts, including how military aircraft need to be faster in both the physical world and the cyber domain.

“There’s plenty of places to hide if you stay low,” Rugen said.

He also cited the importance of improving army aircraft ranges as the United States seeks to bolster its military presence in the Pacific, with its vast expanses of open water.

The development of advanced, next-generation projects is expected to support the country’s defense industrial base even as older aircraft are phased out.

“We’ve done a great job of incrementally upgrading them, but there’s really no more work there because we’ve run out of SWaP - Size, Weight and Power,” Rugen said.