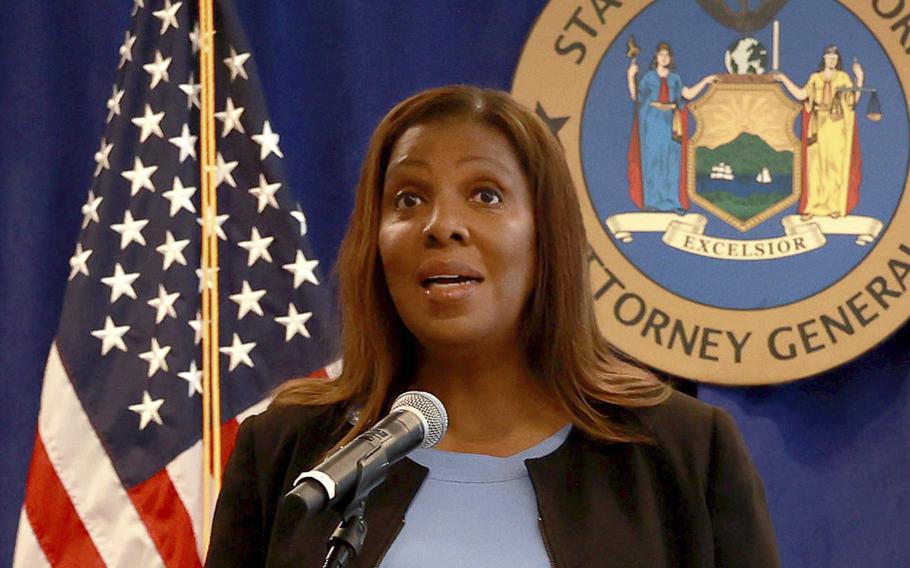 WATERTOWN, N.Y. (Tribune News Service) — “Don’t feed the bear” is what 10th Mountain Division soldiers were told when they first started their assignments on Fort Drum. It’s a warning about a marketing tactic used by a chain jewelry store that had locations across the country, including one here in Watertown, that decimated the financial stability of thousands of soldiers.

In a press conference at the Dulles State Office Building in Watertown on Wednesday, state Attorney General Letitia A. James, her colleagues in the local branch of the Attorney Generals office, a former Fort Drum financial literacy teacher and a local veterans advocate detailed how Harris Jewelry defrauded servicemembers with unfair, illegal and deceptive financing programs, presented as credit-improvement tools.

The company, based out of Ronkonkoma, Suffolk County, has been sued by the Attorney General of New York and several other states over its practices, and on Wednesday the Attorney General announced they’d reached an agreement, not yet approved, to recover more than $34.2 million for more than 46,000 soldiers and veterans targeted by Harris’ scheme.

“It all started with an innocent teddy bear,” Ms. James said.

Harris staff would advertise with stuffed bears, dressed in fatigues, outside storefronts in towns near military installations. One Harris location was open from 2014 to April 2021 in Watertown’s Salmon Run Mall, when it shut down all storefronts because of the pandemic. The company continued to operate online until December of 2021, when it stopped running its finance program as part of an agreement with the Attorney General. The Attorney General investigation into the stores began in 2017, with the first lawsuits filed in 2018.

The Harris salespeople would lure servicemembers into the store, promising that the entire company was dedicated to serving the needs of the men and women in uniform. With Operation Teddybear, servicemembers were told a portion, or sometimes all, of the proceeds from their purchase would go to a military-affiliated charity that sends care packages to deployed troops.

“There was never a written contract between Harris and this charity,” Ms. James said. “Operation Teddybear was a marketing ploy to get servicemembers to walk through their doors, and once servicemembers were lured in with the teddy bears, employees were instructed to inform them of the benefits of their financing program, called the Harris Program.”

In advertisements, documents and in-store pitches, the Harris Program was billed as a tool to help soldiers improve their credit scores or make large purchases. They were given a line of credit and an agreement to pay a certain amount of money per month, or per paycheck, which would eventually come back to them.

Servicemembers who signed onto the program were told they could select some Harris Jewelry as a gift with the program.

In reality, Harris Jewelry was advancing soldiers lines of credit, with amounts and interest rates based solely on the servicemembers branch, term of enlistment and the type of jewelry they selected. The “gift” of jewelry was actually a purchase, made on a Harris-issued line of credit. That credit line was extremely unfair, with interest rates hitting 15%, payments above the agreed-upon amount, and extra costs for the “gift” jewelry tacked on top. Customers weren’t even given the proper documentation for their agreements.

On top of that, the jewelry the soldiers were actually purchasing was massively overpriced, with some items in stores running over 10 times more expensive than wholesale prices. The pieces were of poor quality, with settings that would easily break, oftentimes leaving soldiers paying hundreds of dollars for jewelry that had long since broken.

“Harris Jewelry’s business practices would only be described as pure deception,” she said. “Fraud. And today they are paying the price.”

With the backing of the Federal Trade Commission, New York and 17 other states are suing Harris Jewelry for its practices, with the latest development being an FTC stipulated final order to require the company to stop its practices. The order will have the force of law when it’s approved by a federal District Court judge, which is likely to happen soon.

Under the agreement, Harris Jewelry will have to stop collecting on the more than $21 million in outstanding debt they already have on the books for 13,400 soldiers under the Harris Program, and return more than $13 million to the 46,000 soldiers who have finished the payment program. The Harris Jewelry website states that the company has already started this process, with a message stating that the Harris Program, also known as CACUSA, is no longer taking payments, is writing off all existing balances, and is requesting that the three credit bureaus remove all negative marks from consumer reports from the Harris Program.

The company will also be required to dissolve all their business entities entirely, and pay $1 million in total to the 18 states in the agreement. New York’s chunk of the money, $150,000, will be given to Jefferson County, which will in turn be giving the money to the Joseph P. Dwyer Veteran Peer Support Center, specifically to help educate veterans and soldiers on financial literacy and to help prevent other companies from taking advantage of soldiers like this again.

Tim Crytser, veteran outreach coordinator at the Peer Support Center, said he was honored to receive the $150,000 investment. He said he has seen many veterans in the region who have faced similar predatory lending practices, and it becomes a major burden for those people.

“Once the debt gets in there, everything else starts to snowball, their whole life, their car, their family, their house,” he said. “It starts with the bad, crummy diamond, and it spirals all the way down, and what they usually say is that they never saw it coming. Well, I guarantee you they’re going to see it coming now.”

John Harrington, a former financial readiness counselor at Fort Drum in the late 2000s and early 2010s, said he saw credit schemes targeting soldiers frequently, and said the issue is much bigger than Harris Jewelry. Another company that once had a storefront in the Salmon Run Mall, SmartBuy, would purchase cheap laptops from nearby retailers like Walmart, and sell them back to soldiers in Watertown at a steeply inflated rate. All of the Watertown SmartBuy loans were financed through unlicensed, foreign corporations, and the company was eventually dissolved.

“They were one of many different businesses in the area, the furniture stores, the payday lenders, the short-term lenders,” he said. “I think about servicemembers trying to buy cars in this area. They almost have to drive down to Syracuse to get a fair deal on a car because all the dealerships in this area are trying to prey on them.”

Ms. James said her office, and the local branches of the Attorney General’s Office like the one in Watertown will continue to fight to protect soldiers and won’t allow such predatory scams to target New Yorkers again, with the help of the regional offices and people like Ms. Nelson and Ms. Toce.