After 6 years on the run, Army deserter found in Oregon faces charges of killing wife in SC 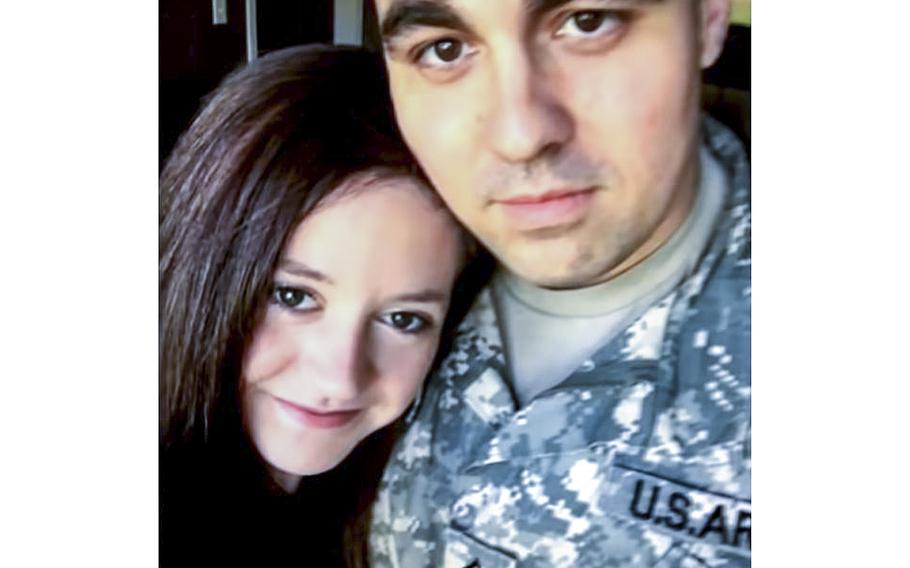 A video screen grab shows Cati Blauvelt with her husband John, then an Army recruiter, before her stabbing death. John Blauvelt, on the run for six years and designated a deserter, was arrested in Oregon on Wednesday, July 20, 2022. (YouTube)

(Tribune News Service) — She was found in the basement of an abandoned “party house” stabbed to death on a chilly October night in 2016.

On Wednesday, Cati Blauvelt’s estranged husband John was arrested in Medford, Oregon, in connection with her death.

Her mother Pam Piver of Simpsonville said at a news conference Thursday the years had been unbearable.

But getting the news of Blauvelt’s arrest “was the most amazing phone call I’ve ever gotten,” Piver said.

U.S. Marshals and Medford police followed a lead provided by a cold case team from the agency’s headquarters, the Marshals office said in a news release..

Blauvelt met his future wife at a sub shop next door to where he worked as a recruiter for the U.S. Army. Her family members told Unsolved Mysteries they were suspicious of him. He was 27, six years older than she was, and he was married.

But the then Cati Boyter thought he was good looking and he was in the military, just as many of her family members were. She decided to join the Army but spent a brief time in boot camp before a previously undiagnosed spinal problem caused pain in her legs.

Once she returned home after a medical discharge, it wasn’t long before her family learned she and John had gone to the justice of the peace to be married. They moved into a four-bedroom home in Fountain Inn, where John staged parties for teenagers, providing them with drugs and alcohol, her family told Unsolved Mysteries.

The parents of one of the teens called police and Blauvelt was arrested for domestic violence relating to an incident with his wife in which he held a gun to her head, and contributing the delinquency of a minor.

Cati moved home and got her dream job at PetSmart in Simpsonville. That was the last place she was seen, Oct. 24, 2016.

Once it became known she was missing her friends and family spent hour upon hour looking for her. It was two friends who found her body shortly after midnight Oct. 26, hidden under lumber in the rundown house in the woods just off Main Street in Simpsonville.

Blauvelt was an immediate suspect, interviewed twice by Simpsonville Police. But before they could get a warrant he was gone, on the run with the 17-year-old whose parents called police about the party months earlier.

Police tracked him across the country, deep South to West Coast. The teen called her family in December 2016 from Eugene, Oregon and said Blauvelt had abandoned her.

He hadn’t been heard from since until Wednesday.

He is charged with murder and possession of a weapon during a violent crime.

Blauvelt was classified by the Army as a deserter.

“Investigators there, working with the Medford Police Department and the Jackson County Sheriff’s Office, located Blauvelt, who had assumed the alias “Ben Klein,” and took him into custody without incident,” the Marshals Office said in a news release.